4 Beginner Errors Which Are Killing Your Progress

4 Beginner Errors Which Are Killing Your Progress

Here I’m going to address some common gym mistakes that I see over and over again with newcomers.

Along with Charlie’s previous article on rookie mistakes in the gym, these are the absolute top tips for when you’re starting out, and hopefully following them will allow you to focus properly on your routine and results instead of faffing around for six months on the spinning hand machine that not even the gym manager knows what’s for.

Mistake 1: Not having the balls to say you’re doing it to look good

I’ll start with the most important of all points here, and one you really don’t hear that often, even from some personal trainers:

Pick a goal and fucking stick to it.

It’s unreal the amount of guys and gals I see in the gym pissing about with all kinds of ridiculous routines that have no bearing on the actual overall goal they are working towards, which 99% of the time is to look better. 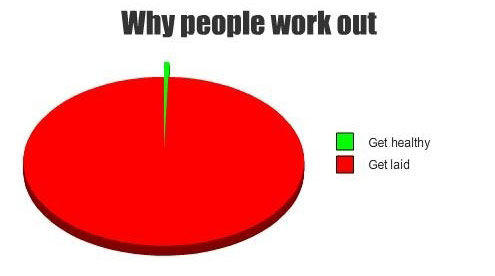 There’s absolutely no shame in acknowledging that the sole reason you go to the gym is to look more attractive.

Not admitting this is like saying you frequent ‘Beavers Gentleman’s Club’ for the agreeable decor and engaging conversation (as true as that may be).

It’s literally the vast majority of peoples’ goal, and the single goal that keeps 95% of gyms and supplement companies in business.

I’m not saying that all beginners should start with this goal, I’m just saying that whatever your goal, admit it to yourself, make it a priority, and stick to it.

Whether you want to get bigger, add strength, compete in the Crossfit Games, become a powerlifter, or just get genitally acquainted with the sexy Bosnian girl on reception, it’s important you have a goal.

Without a goal you are simply exercising for the sake of exercising.

I see endless guys doing ‘all-round fitness’ routines where they do a load of cardio one day, Olympic lifting the next, followed by a hungover Saturday of pure bicep curls.

Life is short enough, so stop wasting your fucking time, and get on with a solid routine that’s going to make you look like a Roman statue.

To help you out, try:

Mistake 2: Too much weight

This point is something I’ll admit I used to be very guilty of myself – hurling 140kg on the bar for squats five months into training.

I’m surprised I didn’t put myself in a wheelchair.

Do not attempt ridiculous weight without first focusing on consistent repetition of the movement itself.

Practice is a very important thing when it comes to weight training, and it’ll make you much stronger in the long run, as well as less likely to injure yourself or create muscle imbalances.

I’m not saying put jack all weight on the bar and do 500 reps per set, but don’t go overboard to impress the local gym wankers.

There’s nothing worse than seeing someone squat with far too much weight while leaning too far forward and doing things to their pelvic floor that should only be performed by a professional Japanese contortionist, made even worse by wearing Nike Air Max.

Practice the movement, get it right, and move on to the next weight once you are comfortable.

A great routine to build strength and make sure you are making progress at the correct weight is the aforementioned 5×5 routine.

Closely related to my last point about Nike Air Max, make sure you pick the right gear to wear right from the start.

I’ve seen people training in jeans (seriously – get the fuck out), people using weight belts for bicep curls, wrist wraps for bench press, and god knows what else.

You’re going to want to train in shorts.

There’s almost never a situation where tracksuit bottoms are a better option.

You need the freedom.

And let’s face it, if you can’t hide your legs, you have to train them!

Don’t bother with too much equipment at first.

Chalk can be useful for deadlifts and bench, but try not to rely on wrist wraps, gloves, knee wraps, lifting straps and weight belts until you get into some serious weight.

You want to build up strength before you start relying on too much equipment.

A pair of spongy trainers might be great for running, but when you’re squatting, deadlifting, or even benching, you want a solid shoe with a good sole.

Powerlifting shoes are great, or Olympic lifting shoes, but even something flat like Converse do a better job than your Sports Soccer constantly-on-sale Nike training shoes.

Having a stable base for lifting weights is important and will allow you to perform the movement properly and with correct form, as well as ensure you’re not performing any unnecessary leaning which can lead to muscle imbalances.

Oh, and stop wearing football kit in the gym. 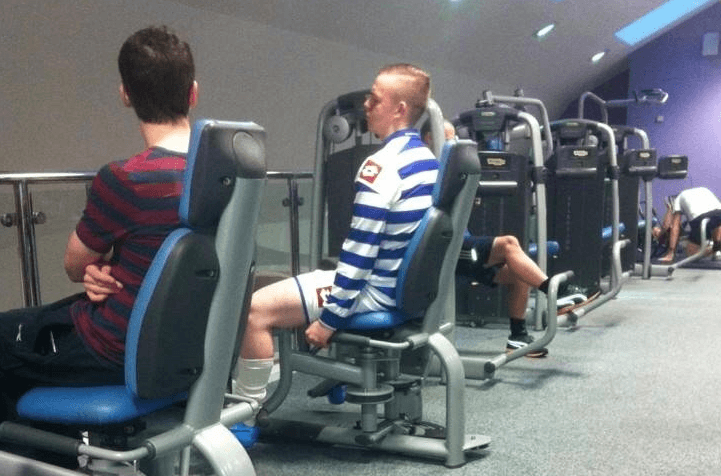 Nothing says “I play for a five-a-side team twice a week, drink cider because I don’t like beer, and have trouble maintaining an erection” like a full Manchester United kit on the leg press.

Whatever it is you do in the gym, whether running for an hour or concentrating solely on weights, your body is going to be breaking itself down.

And the way to repair yourself is by getting in plenty of protein and eating correctly.

The thing is, if you’ve just started at the gym it’s highly likely that you’re not eating properly too, or you’re at least in the beginning stages of learning to eat properly.

And this is where supplements can be really useful for recovery.

Check out our no bullshit noob guide to supplementation for all the info you’ll need. 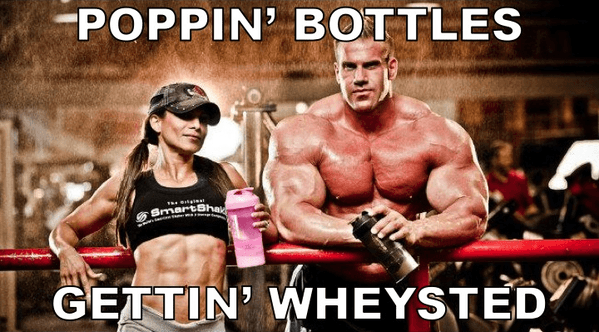 I hope you found these tips practical and useful.

Be sure to check out the rest of of our articles which cover anything and everything to do with becoming the boss of your own body.

And not to forget about the most important tip of all:

Don’t be a little bitch, just get on with it!