For many years now I have been something of a 5×5 evangelist.

Every format of the routine I have tried, from Reg Park’s original programme to the Stronglifts and Starting Strength variations, has resulted in impressive size and strength gains.

As such, I have extolled its virtues to anyone willing to listen – gym buddies, Facebook friends, the Nigerian man who sells aftershave in the toilet of the Pig and Whistle.

However, despite a long period of success with the 5×5 protocol, I recently felt like I had hit a roadblock.

My lifts had plateaued and I had been suffering from a few joint pains and niggles, caused in no small part by the lack of a proper deload/recovery phase with my current programme.

I felt I had reached the stage in my lifting career where I needed something a little more “professional” – something with better programming and a greater emphasis on powerlifting and achieving PRs.

It was as this stage a buddy of mine suggested trying 5/3/1 by Jim Wendler.

I’d previously read about Wendler on internet forums and had recently overheard a rather large chap in my gym (a cross between a marine otter and The Whomping Willow in Harry Potter) recommending the routine as he racked up a 250kg squat (“Yeah, it’s the fucking bollocks, mate”).

It seemed like the perfect routine to take my lifts to the next level. 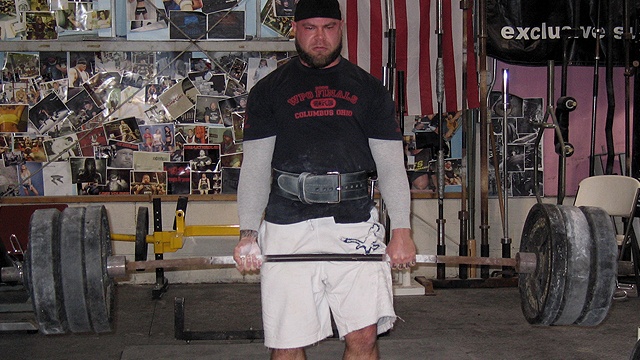 5/3/1 is the brainchild of Jim Wendler (above), a former powerlifter and American football player.

He also looks like the sort of guy who spends his spare time felling trees, attending Slayer concerts and headbutting grizzly bears.

In other words, the perfect credentials for a strength expert.

In creating 5/3/1, Wendler wanted a simple routine to build strength, one that eschewed the complexities of regular powerlifting programmes (Westside) and relied on a simpler percentage-based format.

In addition, Wendler, who at the time was moving away from the sport, intended 5/3/1 to be a more holistic approach to strength, that is, a routine which also incorporated conditioning and mobility work rather than just waddling back and forth from the squat rack like a large asthmatic toad.

The original 5/3/1 routine was published in 2009, and, in subsequent publications, such as 5/31 for Powerlifting and Beyond 5/3/1, Wendler has supplemented and modified the programme in various ways according to differing goals.

This article will deal primarily with the original 5/3/1 routine, with occasional reference to Wendler’s subsequent material where appropriate. 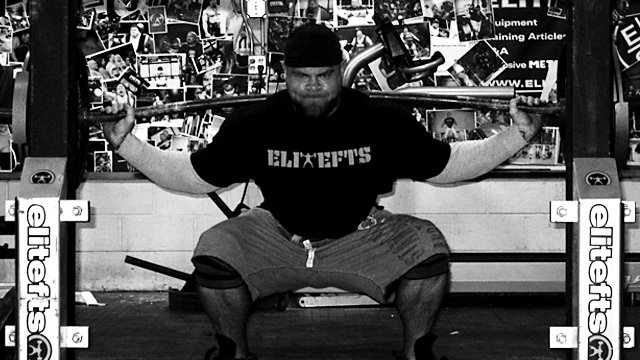 Essentially, Jim Wendler’s 5/3/1 Method is a simple, effective and flexible routine for getting stronger which you can employ indefinitely and tailor to individual goals.

It is build around the central tenets of strength training:

The 5/3/1 routine itself is built around a monthly mesocycle which comprises four distinct microcycles.

It sounds complicated but it’s very simple, as you can see from the table below:

This above table represents one mesocycle wherein there are four microcycles: Week 1, Week 2, Week 3, Week 4 (Deload).

All percentages are calculated from your “training max”, which is 90% of your true one rep max.

So, for example, let’s assume you have calculated your estimated one rep max on Squat to be 150kg.

Your training max would be therefore be 90% of this.

Thus, your very first squat workout would be as follows (rounding to the nearest 2.5kg where appropriate):

The “+” notation means that you do as many reps as possible (AMRAP).

So if you’ve hit the final rep and feel like you have more left in the tank, keep going.

The goal here is to set a rep PR – that way even though you are not always adding more weight to the bar, you are still making progress.

It’s important to point out, however, that you shouldn’t be going to absolute failure on the last AMRAP set, but you should come within a rep of so of it.

At the end of a mesocycle you increase the weight of your training max for the next cycle.

For Squat and Deadlift, the weight increases by 10lbs.

For Bench Press and Overhead Press, the weight increases by 5lbs.

The workouts for the next mesocycle are then calculated from your new training maxes.

For those using metric measurement (kg), simply divide 10lbs and 5lbs by 2.2.

For ease, I have created a helpful spreadsheet which you can use to calculate all of your lifts (imperial or metric) for each cycle.

Thanks for sharing – we really appreciate it!

Jim Wendler suggests a range of assistance work for 5/3/1, which you should complete after the main workout.

The assistance work will be tailored to your specific goals, and can include:

One of the most popular assistance templates is “Boring But Big”, where, after the main workout, you complete 5×10 on the same lift, followed by 5×10 on another assistance exercise.

For these exercises, Wendler recommends that you start light – around 40-50% of your 1RM – and work gradually up from there.

For more info on 5/3/1 assistance work, I suggest you pick up a copy of the ebook or do a Google search, as there’s a tonne of information out there.

Just remember not to get too hung up on assistance work – your focus should be on the main lift, everything else is nonessential.

If you can hear yourself thinking, “Where are the flys?” or “How am I gonna get bigger biceps with no curls?”, then this probably isn’t the routine for you.

I completed six cycles of 5/3/1 over a six month period.

Let’s start with the good stuff…

Most importantly, I set new PRs across the board, dramatically so on the lower body exercises, with my squat skyrocketing to way above what I thought my body capable of six month ago.

What I loved about 5/3/1 is that AT ALL TIMES I felt like I was progressing in some way, whether that was by adding weight to the bar or setting new rep PRs for the AMRAP sets.

In addition, the constant progression combined with the highly structured nature of the routine meant that I looked forward to every session.

Indeed, working through 5/3/1 was by far and away the most motivated I have ever been in the gym.

Plus, the good thing about the AMRAP sets is that you can go at your own pace and really take advantage of those good days when you feel invincible by just fucking going for it.

Every morning, I woke up itching to get to the gym and set a new PR.

Also, the deload week proved a godsend, eliminating all niggles after three weeks of intense lifting and firing me up even more for the next mesocycle.

This regular recovery phase was definitely something I felt had been missing from some of my previous routines, to the detriment of my long-term progress.

Lastly, with 5/3/1 you don’t spend unnecessary time in the gym and the sessions are short.

You get in, work your arse off, set a new PR, and get out, all while the other gym rats are doing lateral raises and Instagramming filtered pics of their “mad delts”.

There’s no bullshit, no superfluous exercises or chit-chat, no mincing around, just heavy weights and PRs.

5/3/1 breeds a KILLER mindset, in that you exist in the gym solely to lift those numbers, and nothing else matters.

Think Steven Seagal upon learning his wife has just been massacred by a Jamaican drug lord who was also doing the dirty with his daughter. 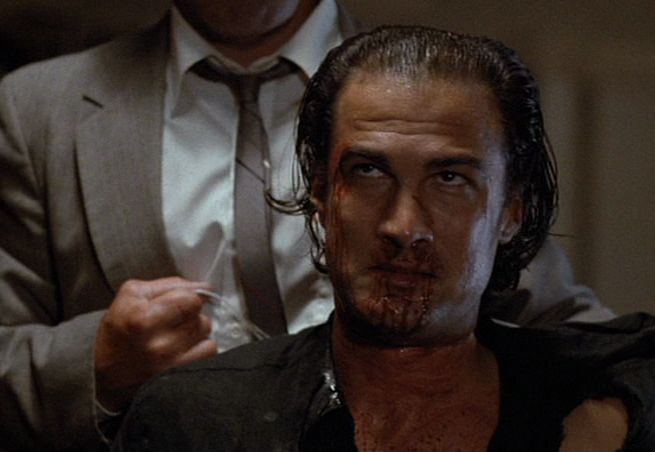 Now the criticisms, which will be few.

First up, and I know this is something a lot of others have echoed, is the exercise frequency, particularly with the upper-body exercises.

With 5/3/1, you are only performing each main lift once a week.

While this was less of an issue with my squat and deadlift (moreover I seemed to benefit from one high-intensity session per week where deadlift was concerned), I did feel like the lack of frequency impinged on my progress with bench and overhead press.

Now I did improve my PRs on both upper body lifts, but not by nearly as much as I would have liked.

Now I’m no powerlifting expert by any means, but I did feel I needed more weekly exposure to these lifts to make better progress.

Perhaps because I was so impressed with my lower-body strength improvements I am being unfair on these marginal upper-body PRs, but I did feel this was a major issue.

As such, for my next programme I am looking at one of Boris Sheiko’s powerlifting routines, which have you benching three times per week and squatting twice a week, as this seems more like the sweet spot for me personally.

One way of combating this lack of overall volume is to use the “Boring But Big” template, which does go some way to correcting this issue, but remember this is first and foremost a hypertrophy workout, and will do little for your overall strength.

A better fix would be to delve into Wendler’s subsequent 5/3/1 variations and modifications, where he suggests incorporating more heavy singles and the use of “Joker sets”, which have you continuing to lift heavy in the 85%+ range after the AMRAP set.

Secondly, and this isn’t really a criticism, because your training max only increases on a monthly basis, this routine, in my opinion, would not be suitable for beginners or most lower-level intermediate lifters as they will be able to progress far more quicker than just once per month.

In this case, I feel the 5×5 protocol and various other full-body routines would be far more appropriate, as they provide more frequency for the big lifts and more opportunity to progress in a shorter timeframe.

Lastly, although this review focuses on the “original” 5/3/1 Method, there are now so many variants out there, not to mention all the accessory templates and other add-ons, that deciding on a routine for yourself can be rather confusing and a bit of a ballache.

However, with some research, organisation and a bit of experimentation, this flexibility can ultimately be employed to work in your favour.

Overall, the 5/3/1 Method by Jim Wendler is a highly-effective and extremely simple routine for building overall strength and improving PRs on all the main lifts.

It’s very easy to implement and I would highly recommend it to any intermediate or advanced lifters who are struggling to make progress with other routines and/or want to get back to basics.

5/3/1 does have, for my money, a few issues, such as a lack of overall volume, especially for the upper-body movements, but this is something you can correct with some modifications, many of which have been proffered by Jim Wendler himself in subsequent 5/3/1 publications.

Signing off, I wish to echo the sentiments of the fellow I mentioned earlier: which is that this routine is quite simply the “fucking bollocks”.

For everything you need to know about 5/3/1, make sure you pick up Jim Wendler’s ebooks, which are available for Kindle at Amazon:

If so, what’s your verdict?

Are you thinking of giving Wendler’s iconic routine a go?