Fitness Gurus You Should (Or Shouldn't) Be Following On YouTube

Fitness Gurus You Should (Or Shouldn’t) Be Following On YouTube

Following on from our earnest look at Fitness Gurus You Should Be Following On Twitter, I’d like to bring you a less insightful and more vituperative ‘YouTube Gurus’ version.

(For more tongue-in-cheek vilification, I also recommend The Top 6 Fitness Personalities On Instagram.)

For this post I’ve selected five bodybuilding personalities, some I like, and to some I show the same disdain and indifference that a rich industrialist would show his underachieving son.

Question: If Scott Herman didn’t exist, would the internet be worse off?

Average physique; patronising/dull commentary; makes a sound like a sad old locomotion making its final journey towards the inevitable scrap heap of modernity.

In early 20th century Europe, to be a successful dictator you had to either rule through Fear or Respect – Messrs Stalin, Mussolini and Churchill.

In the early 21st century, to be a successful YouTube guru you have to rule through Respect or Humour.

Follow if: you’ve never seen a dumbbell before or have a learning deficiency.

If anyone can enlighten me on where the fuck this guy comes from, I’d be thrilled.

This Vin Diesel lookalike is perhaps not the most charismatic, but he gets me every time when he says ‘helbow joints’.

And, unlike Vin Diesel, I actually want to watch more of him.

The man has all the acting talent of a squashed hedgehog.

On an (uncharacteristically) humble note, I really appreciated his front squat tips.

When you have arms like Andrew Marr (in length anyway), the straps tip is a godsend.

In my last article I laid into Greg Plitt somewhat.

I know what you’re thinking and, yes, I am going to do it again.

Simply watch the video above – most of the exercises resemble the opening sex scene from Bruno:

As a fellow excessive perspirator, however, he gains one point back.

Follow if: you have ‘bro’ tourettes and 0% body fat.

I wanted to hate him, I really did.

And with videos named ‘How to approach women (give mini orgasms)’ and ‘How to punch someone in the face’, he does sound like a Class A cunt.

However, if you ignore some of the more choice videos, and the fact that he looks like a regular at Brighton’s premier shirt-lifting nightclub ‘Beef’, he’s actually got some half-decent advice to give.

Hulse doesn’t piss around with calf raises, cable crossovers and any other pointless shite (at least not on screen).

Instead he cites deadlifts, dips, squats and pull ups as the only exercises you need to build strength and muscle.

Eerily, he also looks like the third Hodge Twin (not racist), something Frank Yang has recently alluded to.

Follow if: you want to build muscle but often ask men to spot you on squats even during your warm up set.

Going a la carte with this one.

While he’s patently not in the fitness industry, this McLovin lookalike seamlessly drops words likes ‘tautology’ and ‘vitriolic’ into his videos.

However he incorrectly uses ‘mise-en-scène’, so perhaps it’s just excessive use of Roget’s Thesaurus.

In one video Ian McCarthy criticises people for swinging the bar on bicep curls, then he posts a video of himself swinging while curling, proper mountebank (thanks Roget’s). 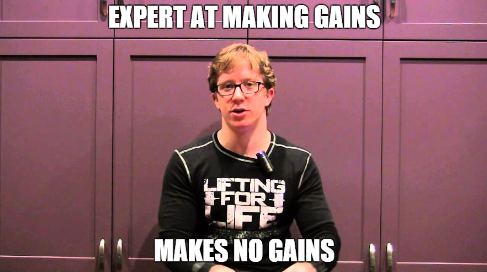 I suspect he’s actually just making these videos to rile thickos on YouTube, as he deliberately stands in front of a bookshelf, uses long words, and calls people out.

All this in an effort to gain revenue from YouTube ads, and it’s working.

He even has a video entitled ‘Ian McCarthy reads hate mail (again)’.

So there we have it, a cavalcade of contrasting, chiselled, chippy characters.

Agree with my diagnosis?

Then you’re wrong, and you’re a grotesquely ugly freak.

No, seriously, please defend these people below if you think I’m being bang out of order.

And if you’d like to draw attention to any others you feel need a new platform (good or shit) then sound off below.

Thanks for reading, and, until next time, lift smart and lift strong.