There are many reasons why people will make the salient decision to start lifting weights.

Maybe you still have to shop at Gap Kids?

Maybe you’re struggling to carry a full basket of shopping around Sainsbury’s?

Or maybe Pablo the ripped lifeguard was showing your girlfriend a little bit too much attention, and, while wanting to smash him in his tanned Spanish face, you also wanted to look a bit like him?

In any case, you’ve made a great decision on the path to being a fucking boss.

But where to start?

Well the gym is probably a fairly good place.

Walk in and you’ll no doubt be met with a scene resembling a cross between the last days of Rome and 28 Days Later.

And one thing’s for certain: you’re likely to feel pretty lost.

What should I lift?

Now I used to read Flex Magazine (monotonously dull publication), and amid the copy-and-paste articles, supplement adverts and steadfast avoidance of the elephant in the room, there was one useful section.

Ernie, an ex British bodybuilder, would follow the Flex modus operandi by basically just repeating the same guff each month.

However, after cancelling my subscription to Flex, I now agree with him.

Whenever a young budding gym mouse would write in hoping to gain the secrets of the ultimate bicep workout like Nazis searching for the Lost Ark, Ernie would shoot them down instantly:

“You do compound exercises and you don’t try and train six times a week.”

And so, this leads me onto the point of this article.

I’m not Ernie Taylor but I’m more than qualified to tell you beginners which exercises you should not even consider in your first 6-12 months of bodybuilding.

So, without further ado, here is Gymtalk’s ‘Top 5 Pointless Exercises for Beginners’…

Do you even know where the fuck your rear delts are?

The fact is, unless you’re really pushing to compete, you’ll just be wasting your time on rear delt flies.

And chances are you’ll look like a complete tit while doing them as well – think frantic child hysterically swatting away a moth.

Instead concentrate on big shoulder exercises like the military press, dumbbell press and barbell shrug.

These will not only build huge deltoids and traps but the military press in particular will do wonders for your core strength.

Actually, unless you’re a grizzled 30-year-old man or ex rugby player, you should avoid this exercise altogether.

More than likely your ego will put too many plates on the bar and you’ll either end up lying underneath the bar as part of another hilarious “gym fails” video on YouTube or you’ll contort your back like some sort of disgusting serpent trying to get the weight back up.

Instead you should squat with a barbell.

This will improve pretty much all of your lifts and it’s the best way to build an intimidating physique. 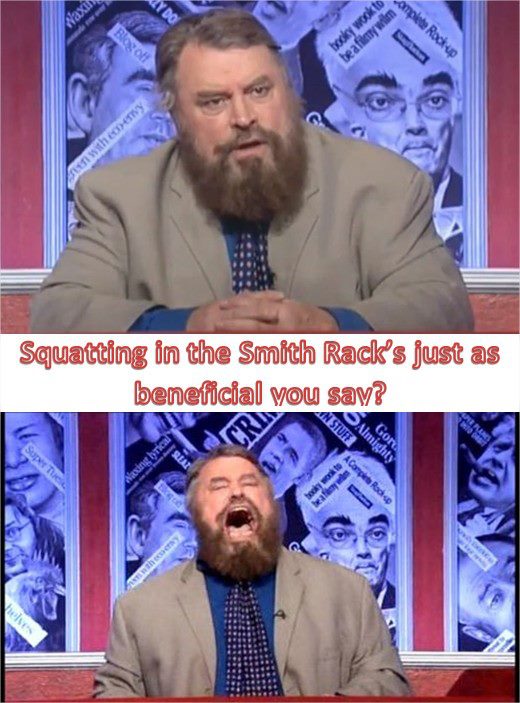 Hell, the next time your boss is giving you shit why not pick him up and squat?

I guarantee he’ll be so impressed you’ll get a raise.

NB: probably don’t do that.

Personally I’m yet to find one of these machines that doesn’t make you follow a pretty horrible range of motion and leave you doing a sort of chest/shoulder press hybrid while wondering why you didn’t just use dumbbells.

Stick with the barbell and dumbbell press, the big daddies.

Or failing that, a duck: 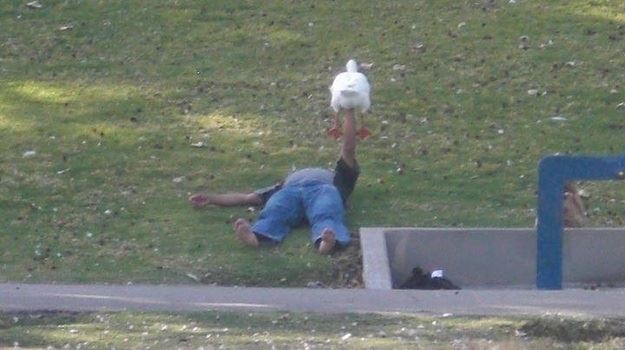 At this stage in your lifting career your tendons are not going to be used to heavy weights so focus on free weights with perfect technique.

Like Johnny Vegas at a Greggs pasty tasting event, nothing says I’m here to make gains like a good old bench press.

This exercise does no harm but it’s really about as isolation as you can get.

This is an exercise perfect for finishing your tricep session off with high reps, time under tension and all that bro crap.

As a beginner you should not be doing this.

The first six months of training are pretty much carte blanche in terms of gains, so to maximise this window stick to the big tricep exercises like dips, close grip bench and skull crushers.

Anything else is just peacocking, and, as the famous saying goes, “a skinny peacock doesn’t get a lot of peacock sex”.

I have a pretty good theory that you’re either born with calves or your not, any training is fairly inconsequential.

Maybe if you want to go on stage then your can bust your balls with giant drop-rest-pause-supersets and find yourself unable to stand up straight and miss that skiing lesson you’d had booked for ages.

Also, strong calves have pretty much no functional use, unless your job is walking up stairs all day.

And save for those living in Soviet Russia where they’ll literally pay you to do anything to keep unemployment levels down, this isn’t a real job.

Instead squat, squat everything. 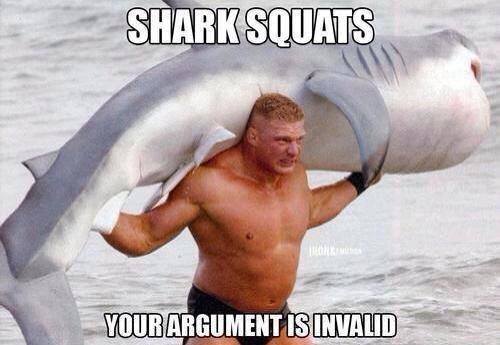 So there we have it – five exercises that all beginners should stay well clear of.

Stick to big full body exercises, full body workouts, perfect technique, big eats and plenty of recovery and I guarantee Pablo won’t be eyeing your woman so readily next year.

Although if you choose to go back to the same holiday destination two years in a row then your girlfriend will probably leave you anyway, open your mind a bit more, eh?