Imagine if Kermit the Frog had a one night stand with an Asian Jay Cutler and produced a love child.

A man with seemingly nothing else to do in life than try to consume his own body weight in spring rolls and chase speeding trains along platforms à la Tom Cruise.

Imagine if Kermit the Frog had a one night stand with an Asian Jay Cutler and produced a love child.

A man with seemingly nothing else to do in life than try to consume his own body weight in spring rolls and chase speeding trains along platforms à la Tom Cruise. 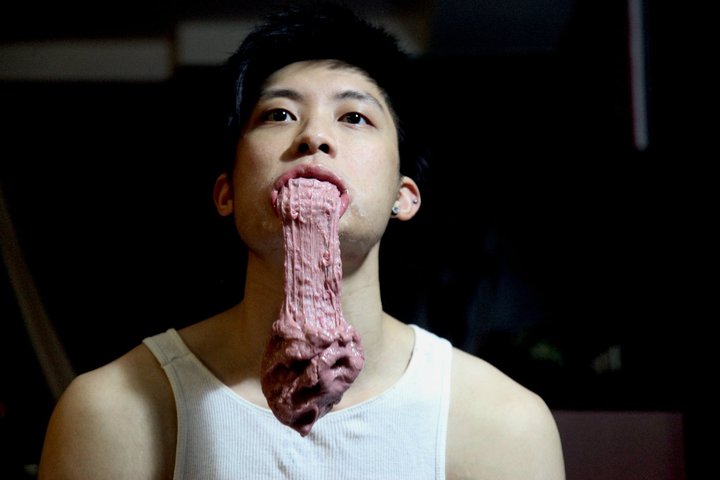 For that, I simply say, thank you.

I mean let’s be honest, some pretty weird shit can be found on the Internet coming from the Far East but this man has to be up there.

And we here at Gymtalk would love to give the man another platform to spread his message of ‘Bigger, Stronger, Weirder’.

So here’s a brief breakdown of this bodybuilding personality and some of his more choice escapades.

Frank Yang: you had my curiosity; now you have my attention.

This video is proper Ronseal.

He saunters up to the gym on a moped, snorts a line of creatine (perhaps it gets into your system quicker?), then incline hump presses 100kg for reps.

For those who don’t know or are too thick to search for it themselves, hump pressing is basically simulating sex while on the bench press.

Also, my god can this man play the violin.

Yang seems to have a complex relationship with the Hodge Twins, calling them out in several videos and constantly referring to them.

The climatic juxtaposition of this tête-à-tête can be seen in his own anti-homage to the thankfully moribund ‘Harlem Shake’ viral craze.

I welcome any analysis of what this could mean.

Incidentally, does anyone else think the Hodge Twins have fucked?

There’s something slightly eerie about their dynamic.

Like with the Hairy Bikers, or Alan Carr and Justin Lee-Collins, there’s definitely more to it than just an ‘on-screen relationship’.

Although be careful what you say about JL-C, he will thump you.

What really sets Frank Yang apart from other YouTube gurus is the fact that he seemingly offers no advice whatsoever.

If he wants to do shots of whisky in between each set in the gym, he does.

If he wants to provoke war between China and the United Kingdom, which would replace the current Chinese government with one more supportive to his plans of exclusive broadcast rights to his media corporation, he does.

OK, so the last one was the plot of Tomorrow Never Dies, but you catch my drift. 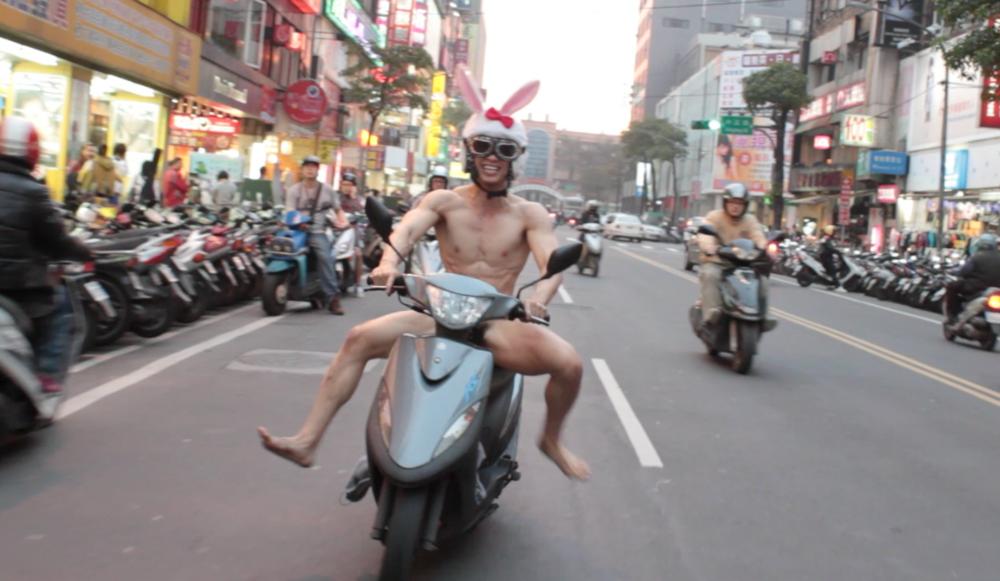 Despite fairly poor form, he can shift a hell of a lot of weight.

Just check out this video below:

Deadlifting roughly three timess your own bodyweight is impressive in anyone’s books.

Frank Yang: The Man, The Myth, The Legend

I think we should all simply sit back and feast our eyes upon his all-you-can-eat buffet of highly entertaining and downright ludicrous videos.

And on that note, I’ll leave you with a quote from the man himself:

I was about to go down on Vivian during a 69 when I noticed a pinhead-sized frog egg attached stubbornly between the 7th and 8th folds of her labia.

I tried to blow it off.

Then I examined it with a microscope and saw a white, almost see-through elephant floating in the middle of the egg like a nucleus, with what looks exactly like me floating around it like an electron in extreme high speed.

I put down the microscope and started licking the egg until it squirted out creatine like a laser beam.

All the while she gave me the best blow job of my life.

Seriously, what the fuck?

After posting this article on our Facebook page, the man himself dropped by to show his appreciation. 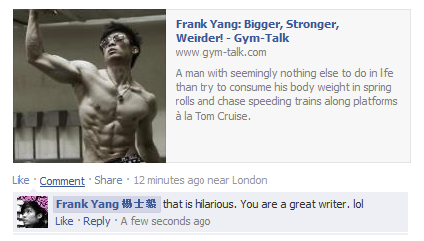 Yang then agreed to speak with us in greater depth, so, if you enjoyed this article, then, trust me, you won’t want to miss Gymtalk’s exclusive interview with Frank Yang.

We ask all the questions that everyone else is afraid to:

What is the best sex position for building muscle?

Do you think the Hodge Twins have fucked?

What’s the largest animal you could squat?

Is Frank Yang mentally ill or the Carl Jung of the YouTube bodybuilding community?

Let us know your thoughts in the comments section below!