Like a heroic play by Sophocles or Aeschylus, the sport of bodybuilding is full of mythic characters capable of superhuman feats, extremes of comedy and tragedy, pathos, spectacle, and men running around with their bollocks out while women are shunted to the sidelines.

And just like the grandiose plays of the Ancient World, bodybuilding has its fair share of legendary characters, theatrics and epic moments.

Whether it’s Arnie striking his formidable lat spread pose, Reg Park oozing charisma as Herucles, or Kai Greene putting his junket pumper inside a grapefruit, we are simply spoilt for choice.

However, there is one person that is probably not on your list of iconic bodybuilding personalities.

And he should be, unequivocally so. 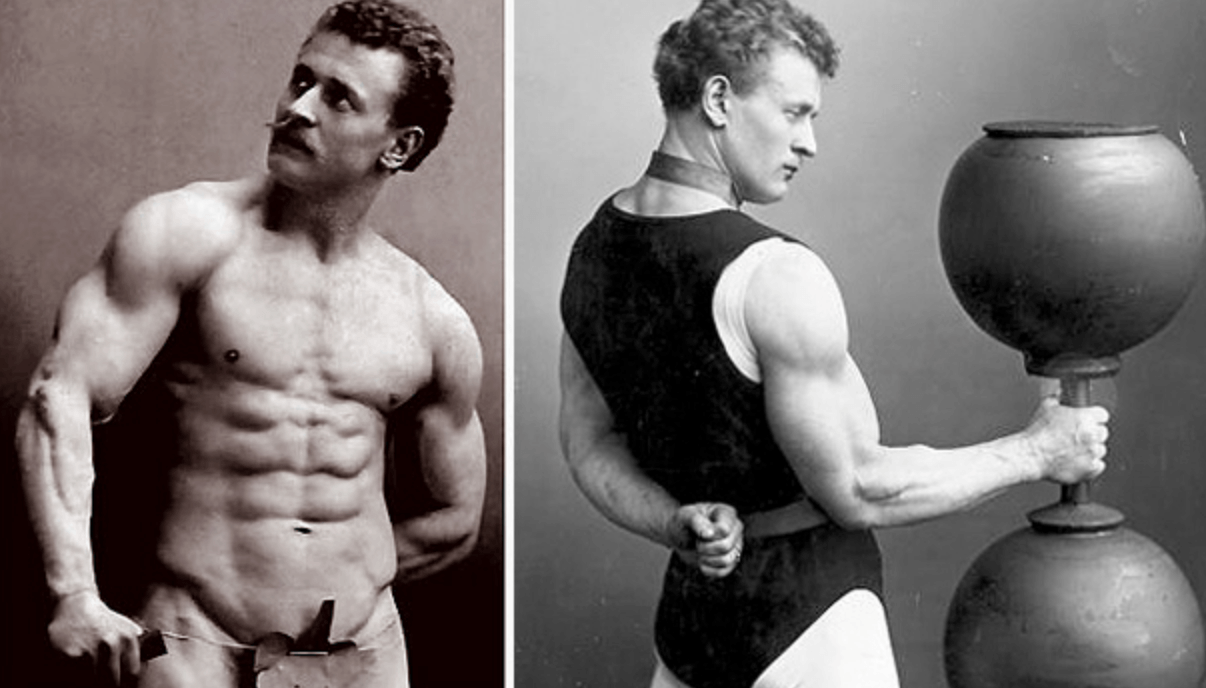 Eugen was born in the Prussian city of Konigsberg on April 2, 1867.

Born out of wedlock, he was later adopted by the Müller family, who gave him the name Friedrich Wilhelm Müller.

Growing up, Sandow later reflected, he was a pathetic figure – weedy, fragile and pale-skinned.

However, when he was 15 his father took him on a trip to Rome, and his life was to change forever.

The great sculptures of deities and wrestlers that he saw there, contorted in poses of brawn, beauty and flesh, stirred his imagination, and he dreamed of one day reaching this aesthetic apogee.

Returning home, the Prussian teenager dedicated himself tirelessly to achieving this state of physical perfection, taking tips from professional circus strongmen which would put him on the right path.

In later life, he went on to measure the ancient sculptures in museums, developing, in the process, his ‘Grecian Ideal’, which underpinned his notions of the ‘perfect physique’.

When he was 18, he left his family and home behind, and, adopting the stage name ‘Eugen Sandow’, travelled across the capitals of Europe performing as a circus athlete and professional wrestler (see the video below).

In 1889, while performing in Venice, Sandow had a chance meeting that would change the course of his life.

While emerging from the sea one day, his muscular figure was glimpsed by American painter Aubrey Hunt.

Like Gustav von Aschenbach in Thomas Mann’s Death in Venice (minus the latent paedophilia), this painter was completely enamoured with this Sandow’s bulging physique.

Hunt convinced Sandow to travel with him to London, where, he correctly predicted, fame, fortune and the odd vagina or two would await.

The Prussian and the Painter (sounds like a shitty Agatha Christie novel) arrived in London a month after their chance meeting.

In I899, Sandow, now 22 years old, and egged on by his new mate, ‘stage jumped’ a strongman performance at the Royal Aquarium Music Hall in Westminster.

Dressed in a suit and monacle, which he later ripped off to the shock of the audience, the little Prussian went on to beat two renowned strongmen in assorted weightlifting trials, winning himself a cool £600.

Legend has it that Sandow, during the show, lifted a 500lb stone block using his middle finger!

After these sensational scenes in Westminster, Sandow quickly became a household name in Victorian England.

He travelled the country, performing superhuman (and often bizarre) feats of strength, including bearing the weight of horses and soldiers on his chest, bending iron bars, snapping chains, lifting pianos, and, on one occasion, bench pressing a cow.

In this video below, which was recorded in 1903, Sandow even performs a backflip.

I’m thinking of petitioning Mr Olympia to include this as a mandatory element in posedown from now on.

I would bloody love to see Jay Cutler attempt this:

He later embarked on a tour of the US, where, like some entrepreneurial sex fiend, he charged ladies £300 to caress his muscles in private.

No prizes for guessing which muscle was the one in popular demand.

Upon his return to England, Sandow left his womanising days behind him and settled down to marry Manchester-born Blanche Brookes.

After Sandow started suffering from stress while touring the US, the couple bought a house in London’s Holland Park, where they raised two daughters, Helen and Lorraine.

In 1901, Sandow hosted ‘The Great Competition’.

This was an extravagant pageant of beauty and brawn which laid the ground for the Mr Universe and Mr Olympia competitions of today. 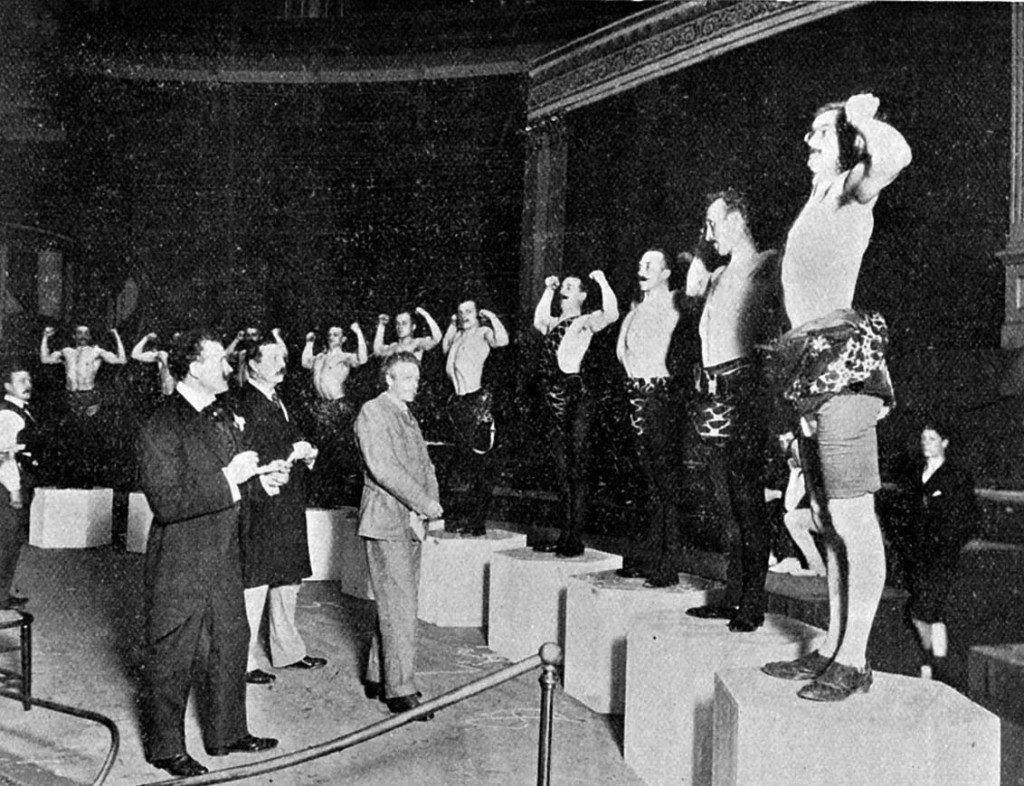 Held at the Royal Albert Hall (see photo above), this was the first bodybuilding competition ever to be held in Britain, and it was a rip-roaring, pant-wetting success.

The entrants, clad in leopardskin leotards, flexed their muscles to the cheering crowd (many of which had to be turned away at the door), as they competed to win a naked gold-plated statue of Eugen Sandow.

On a side note, for a society that was often violently intolerant of homosexuality, I find this whole premise, for want of a better phrase, pretty fucking gay.

Although he would clearly struggle to compete against the household names of today, Eugen Sandow’s physique was clearly one borne out of sheer strength and genuine muscle mass. 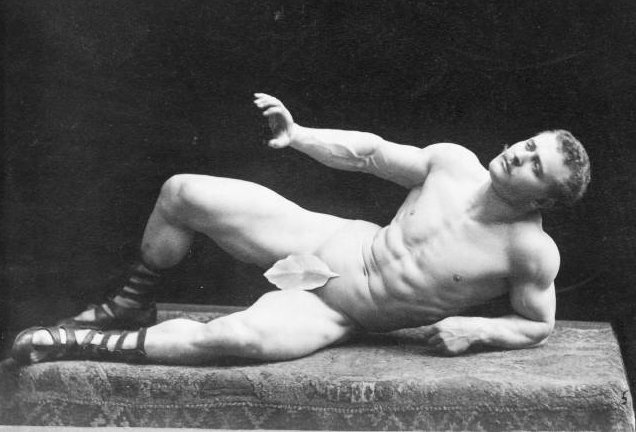 It would safe to assume that he was every bit as strong as he looked.

Although I’m sure that the cow story is fabricated.

How do you bench press a cow for god’s sake?

It would be a logistical nightmare.

According to Sandow, his physique was built on a foundation of high-repetition exercises, a technique still employed with great success today.

If you’re interested in more details about the particulars of his workouts, Sandow’s book Strength And How To Obtain It (1897) can be read online here.

Interestingly, in all of the pictures his pecs appear disproportionately smaller than the rest of his muscles.

Presumably, this was due to the fact that the bench press did not come into prominence until the 1920s.

Eugen Sandow began to teach his muscle building techniques and workout tips to the public, and went on to open a series of ‘Institutes of Physical Culture’ (forerunners to the gyms of today), as well as selling and manufacturing gym equipment.

He boasted a string of celebrity clients, including Sir Arthur Conan Doyle, who went on to become one his closest friends.

Eugen Sandow taught the secrets behind his incredible physique, imparting theories on nutrition, exercise and weight training that were previously unheard of.

He also volunteered his knowledge to various philanthropic causes: he sponsored the 1908 London Olympics, provided financial support for Ernest Shackleton’s legendary expedition to the South Pole, and worked to improve the physical fitness of the recruits who signed up to fight in the Boer War.

In 1906 Sandow became a British citizen, and in 1911 he was appointed Professor of Physical Culture to George V.

In the lead up to the First World War, Sandow’s Prussian heritage came back to bite him on the backside.

At that time Sandow, ever the businessman, was diversifying into chocolate production, and, in the climate of fear-mongering and intense anti-German feeling, was accused of using German ingredients and technology in his latest business venture.

Add to this the false accusation that he was German spy, and Sandow’s impressive, hard-won business empire began to crumble all around him.

Like puddles in sunshine, Sandow’s fame, fortune and sex appeal gradually eked away, and, in 1925, he was involved in a serious car accident.

Although he survived the crash, he died from his injuries few weeks later on October 14.

It was not until the 1970s that Sandow was rescued from obscurity and his contribution to the nascent sport of bodybuilding was acknowledged.

In recognition of his lifetime achievements, winners of the Mr Olympia have, since 1977, been presented with a statue of Sandow.

Standing at just 5ft 9in, Sandow was a brick shithouse and consummate showman who had a body carved from the same marble as Leontiskos and Milo.

He made this kind of muscular physique, which had previously been thought unattainable, achievable.

One could argue that by changing the perceptions of strength and fitness in Victorian England, and by making the sport popular in the first place, Sandow made a pioneering contribution to bodybuilding that was just as – if not more – valuable than Park, Reeves or Schwarzenegger.

If nothing else, you have to respect him for that.