Say “bodybuilder” to most people these days and they’ll probably bring to mind a misshapen, oily blob that would look more at home inhabiting a cave in a Frank Herbert novel than the stage of a Mr Olympia contest.

50 years ago, however, this word would have conjured up different images – beautiful v-tapers, classic lines and perfectly proportioned muscles.

In the intervening years, the ascension of steroids and the mistaken belief that bigger is always better transformed professional bodybuilders from classical heroes to hulking, out-of-breath monsters with tits.

The former were men borne to Euripidean wet dreams while the latter look like the child of a Teenage Mutant Hero Turtle that’s been fucked by a Triceratops and conceived in a puddle of shit.

While technology and science has no doubt advanced our understanding of the human body, this has sometimes been to the detriment of what actually looks good.

Indeed, as modern bodybuilders get bigger and bigger, the classic physiques of the pre-steroid era gradually fade away, with Steve Reeves and co beginning to resemble that picture of the McFly family in Back To The Future.

Today’s roided-up physiques are now so unobtainable for the natural lifter that Olympia competitors might as well start experimenting with elephant genomes.

Just get it over with – I for one would love to see a Mr Olympia where Phil Heath is beaten by a mutant ogre with tusks and the exoskeleton of a crab.

The fact that such a contest is a now genuine possibility shows how far bodybuilding has come since the 1950s, when the physiques of Mr Universe champions such as Bill Pearl looked athletic, healthy, attainable and something to aspire towards… 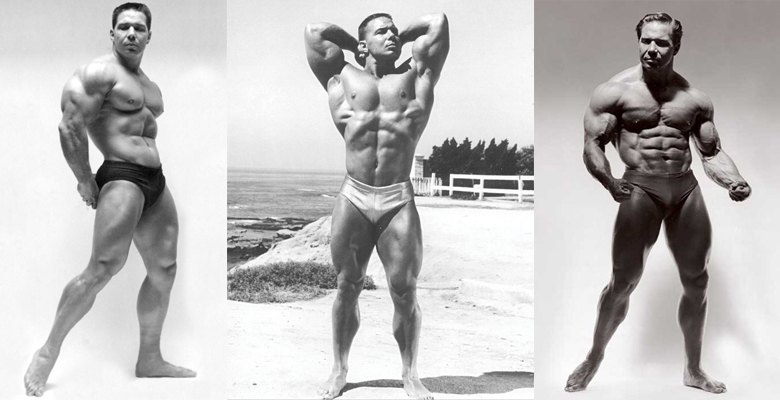 Bill Pearl was one of the foremost bodybuilders of the twentieth century, winning five Mr Universe titles between 1953 and 1971 (once as an amateur, four times as a professional).

Like most eminent bodybuilders of this era, Pearl was strong, classically proportioned and athletic.

He could tear licence plates and horseshoes in two, blow up hot water bottles and bench press 500 pounds.

But, crucially, Pearl still had a physique that, as well being strong and beautiful, looked within reach.

He has authored a plethora of books and training manuals during the course of his career such as the popular Getting Stronger: Weight Training for Men and Women (1986) and Keys to the INNER Universe (1979).

Although he dabbled with steroids much later in his career, the foundation of Pearl’s mighty physique was, like Arnold Schwarzenegger and Larry Scott, built on consistent full-body routines with compound lifts.

One of Bill Pearl’s oft-mentioned workouts was the ‘Bulk & Power Routine’ which we are going to look at in this post.

Like the routines that Pearl followed in the early 1950s under the tutelage of Leo Stern in his San Diego gym (Stern had previously trained 1942 Mr America Clancy Ross), this one comprises three six-week courses, each of which feature three full-body workouts per week.

Each course should be followed for six weeks and consist of three workouts per week.

Workouts should be on non-consecutive days allowing your body to fully repair and recover.

Although not stipulated in Pearl’s original programme, I would advise incorporating a deload week between each course.

Either focus on mobility work and technique with very light poundage or just take a break from the gym completely.

Don’t skimp on calories and focus on resting up – deloading is all about recovery and growth.

On the squats (also referred to as deep knee bends) pay special attention to your breathing.

According to Pearl, correctly executing the breathing sequence carries more importance than the poundage used.

Pearl, like all bodybuilders in the 50s, especially his idol John Grimek, was a proponent of the breathing squat, an exercise which they had found to have an explosive effect on the body’s growth potential.

Before every squat, perform two to four deep inhalations through the the mouth, keeping the chest high.

On the last inhalation, squat down, being careful not to bounce, and hold your breath until you return to the standing position, then exhale.

Repeat this process for every repetition, increasing the amount of breaths throughout the set.

Like squats, with pullovers and bent arm laterals the focus should be on breathing.

Indeed, these are strictly breathing exercises, with the goal being ribcage expansion rather than muscle hypertrophy.

As such, use a light poundage, breath deeply, and focus on stretching your rib box.

Inhale as the weight is lowered and exhale as you bring it back to the starting position.

Trainees should always start with course number one, regardless of level.

While the initial volume may feel low for those with a few years of training already under their belt, it is important to get a feel for the exercises, rebuild and prepare your tendons and ligaments for the intensity of the proceeding training blocks.

With this in mind, begin every exercise with a light poundage (Pearl advises around two thirds of your max effort) with which you can comfortably complete all repetitions.

Every time you complete the required reps and sets for an exercise, add weight to the bar (2.5kg/5lbs) for the next workout.

This approach, built around the principals of progressive overload, gradually increases the stress placed on your muscles which will build strength and work capacity and stimulate muscle hypertrophy.

Pearl recommends between three and five minutes rest between every set.

The focus should be on lifting heavy and using full range of motion rather than rushing through the workout at breakneck speed.

Due to long rest periods, Pear suggests always training in a tracksuit to keep your body warm and conserve energy. 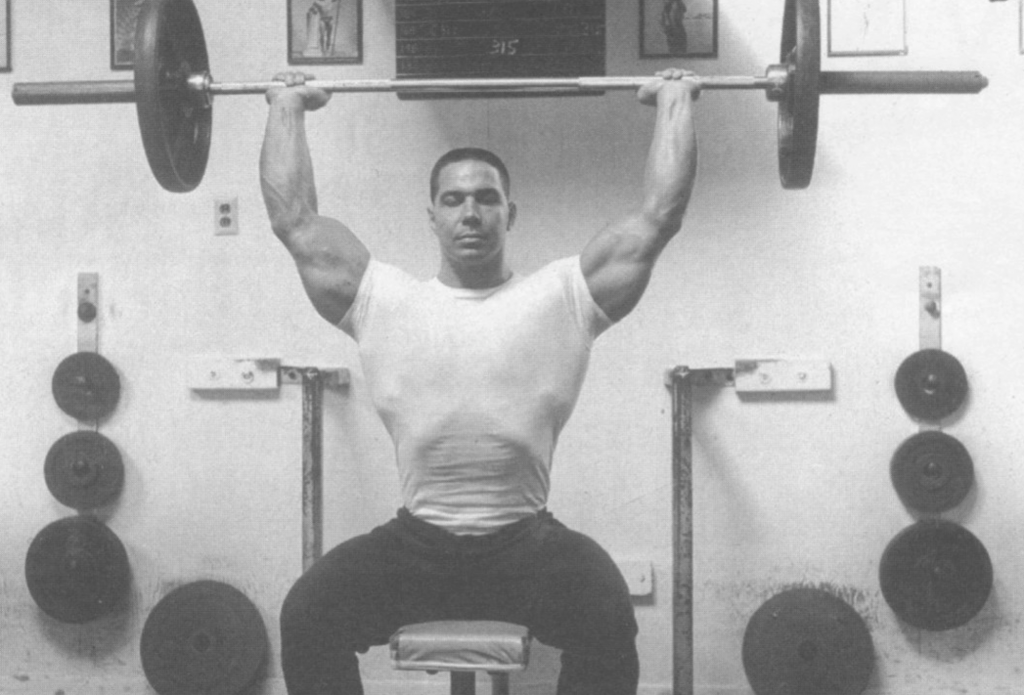 Eat fresh, wholesome and well-prepared meals at the same time every day.

Being consistent with your eating habits will produce far better results than eating willy-nilly.

Taking the average male daily calorie intake of 2,400-2,800kcal as a baseline, Pearl advises gradually increasing this to 5,000kcal to drive growth.

If you can’t the calories from your three daily meals, eat four to five meals a day.

Also, gains can be made from drinking a quart (two pints) of milk during workouts.

Everyone is different, so find the sweet spot by recording progress and making adjustments where necessary.

Above all, ensure you are consuming the right kind of food, as a poor diet will only lead to fat gain.

Never overlook the role that sleep and relaxation play in building muscle and strength.

Perl recommends a minimum of eight and a maximum of ten hours interrupted sleep every night.

Again, as with your diet, getting into a habit of going to sleep at the same time every night will prove produce better results than haphazard sleeping patterns.

Habit helps the body to regulate itself and will deliver better gains.

Pearl also places importance on mastering the ability to relax.

Keep an accurate record of your training.

For each workout, jot down your poundages, sets, reps, rest times, as well as anything else you feel is pertinent.

The key to progressive overload is a gradual increase in training stress, and keeping an accurate logbook will allow you to be methodical when it comes to tracking progress.

Also important is keeping a daily record of your bodyweight.

As well as allowing you to see any progress, tracking your bodyweight will allow you to make precise changes to calorie and liquid intake if you’re not gaining bodyweight.

However, as Pearl states, “Do not expect a big increase in bodyweight the first week or two, for your system must adjust itself to the change in work.”

If, after a few weeks of training, you are still not seeing gains in size and strength, take a closer look at your lifestyle.

More often than not, not getting enough nutritious food or adequate sleep is the real reason behind your lack of progress, so fix these issues before adjusting the workout routine.

Pearl stresses the value of a proper mental attitude when approaching this – or any – training plan.

You should think positively about all your daily activities, physical, mental and moral.

It will aid you in your training in the gym, as well as your personal life.

A healthy, positive attitude will improve your body and make you a better person. This is an old-school, no-frills muscle building routine which will have you working hard for a solid 4-5 months.

If you’re the type of lifter who performs rope pushdowns while yelling “come on champ”, spends £100 a month on pre-workout supplements and snapback caps, and has a Eurodance playlist called “Pump and Grind” saved on their Spotify account, this routine probably isn’t for you (and I would happily execute you with a bolt gun).

Pearl’s course very much relies on a simple but tried-and-tested methodology for getting big and strong: no shortcuts, no gimmicks, no easy split routines – just busting your balls with a heavy barbell for years and years, never missing a workout, and eating like a boss.

That’s the real secret to building muscle – but it’s a far harder pill to swallow than training biceps and triceps three times a week and taking whey protein.

If you’re thinking of giving this routine a try or if you’ve already followed it, I’d love to hear from you in the comments section below.

Also, if you have any other questions, comments, or just want to call me a cock turnip, feel free to get in touch and I’ll get back to you. 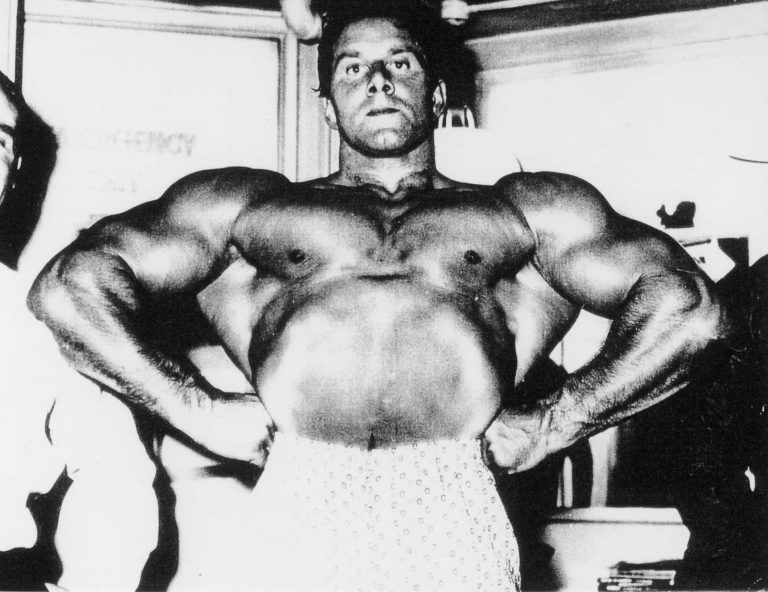