John Grimek: The Monarch Of Muscledom 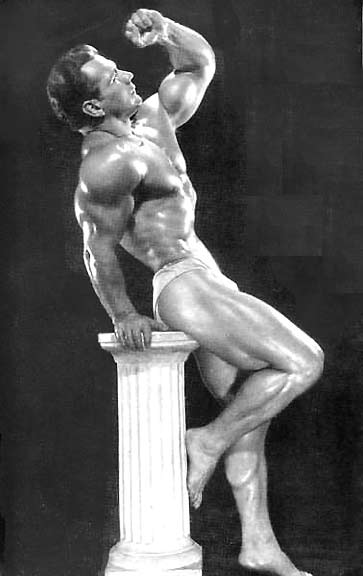 I have become increasingly disillusioned with modern bodybuilding of late – and I know I’m not alone.

Over the last few decades the sport has changed drastically, and for the worst.

Although some might disagree, the way I see it, the halcyon days of aesthetics and beauty have been snuffed out by a depressing parade of chemicals and mutants.

I miss the Golden Age.

I miss the aura of majesty and magic, the camaraderie and showmanship, the NATURAL beauty of the human form.

Above all I miss John Grimek – for many, the greatest all-natural bodybuilder of all time.

Grimek (pronounced ‘grimmek’ not ‘grymeck’) dominated the sport of bodybuilding in the 30s and 40s, winning the AAU Mr. America twice.

Over the course of his career he never lost a contest – a record which is still unsurpassed today.

In his era Grimek’s physique was unmatched, breathtaking, revolutionary.

He had a chest as wide as the M6, biceps like basketballs, deltoids like cannonballs, a tiny waist, and looking into his eyes was like losing your virginity.

At the time, leading art critics were even heard to remark that they had never seen the human form so beautifully evoked as it was by John Grimek (gaaaay).

But, significantly, his rippling physique was also supremely functional and athletic.

He was also one of the strongest men in the world, competing as a weightlifter in the 1936 Olympic Games, and he could also perform backflips and the splits with the dexterity and grace of a gymnast.

It was this sensational blend of physical grandeur, lithe athleticism and Herculean strength, along with his good looks and charisma, that made Grimek such an iconic figure and an inspiration for millions.

He was the ‘Monarch of Muscledom’, and always will be.

Like many of us, he started lifting iron in his early teens to build his physique.

However, unlike most of us, his muscular development was so swift and impressive that he quickly caught the interest of many professional photographers in New York who wanted to take his picture.

No matter how hard I work out, I can only dream of this level of validation.

The only person who has professed an interest in taking my picture was a man called Dougie who smelt of piss and used to walk around the gym changing rooms in his slippers and y-fronts.

Haven’t seen him for years – I assume he has since been incinerated.

Grimek found employment as a male model and worked up to 100 hours per week posing for University classes and magazines.

He earned around $80 per week which was a huge sum considering this was the Great Depression.

Someone should have told Tom Joad to pick up a dumbbell! 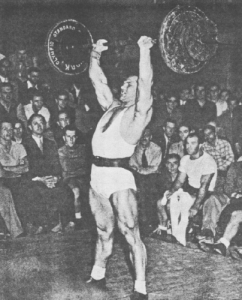 Realising his strength in the gym, Grimek quickly developed an interest in Olympic weightlifting.

In 1936, after becoming national champion, he was picked to represent Team USA as a weightlifter at the 1936 Olympic Games.

He finished 9th in the Heavyweight category.

However, the expert consensus what that if he competed in the Light Heavyweight category he would easily have medalled.

Grimek also went on to claim the American and World Record for the Military Press, one of his most formidable lifts.

After his moderately successful venture into weightlifting, Grimek decided to focus his attention exclusively on bodybuilding.

(However, he would still compete in – and win – weightlifting contests right up until his retirement.)

His victories in this prestigious competition were so overpowering that the contest organisers decided to subsequently introduce the ‘one victory only’ rule in order to stop Grimek dominating the competition for the foreseeable future.

However, Grimek really caught the world’s attention in 1948 when, at age 38, he won the NABBA Mr. Universe contest in London, defeating the inimitable Steve Reeves in the process.

After his defeat, Reeves famously declared: “John Grimek is the greatest bodybuilder that ever lived”. 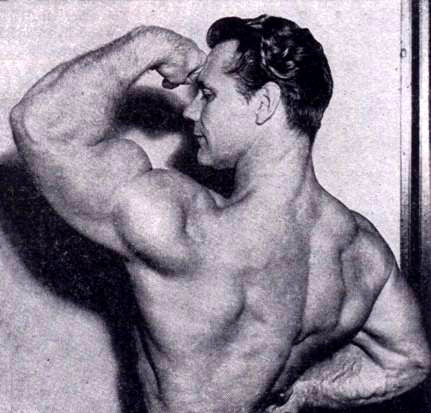 But it wasn’t just his beautiful physique that enthralled crowds.

It was also his incredible athleticism.

During his posing routine, John Grimek would glide nimbly across the stage like a gymnast, performing, in addition to the ‘classic poses’, backflips, frontflips, tiger bends, the splits, and handstand push ups.

Just imagine some of today’s crop trying to pose in this manner.

I doubt Jay Cutler could even flip a pancake!

John Grimek was a true showman – or, as one commentator would later put it, “a young man with a massive physique and an uncommon talent for showing it off.”

In 1949 Grimek competed in his last contest, at AAU Mr. USA, where he was once more victorious, defeating the likes of Reeves, Clarence Ross, and George Eiferman.

He retired from the sport undefeated. 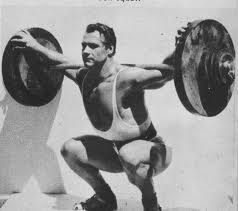 For me, the most appealing thing about John Grimek was his approach to training.

Grimek did not train like a bodybuilder in the modern sense.

By that I mean he didn’t spend hours working on muscle isolation, cycle through a conveyor belt of chemicals, or make shitty YouTube videos.

His mighty physique was forged in a furnace of Olympic lifts, dumbbell presses and endless heavy squats.

And he did it all in the same monstrous workout:

I trained everything in every workout. I didn’t do what they call split workouts and train legs and arms one day, back and other stuff the next day. The only way I ever isolated a group of muscles was when I was finished with my routine for the day and I still thought I needed more for my back or chest or legs or whatever.

Incredibly, such was his love for squats that he would often complete 100s of repetitions in the same workout.

My legs are quivering like a baby giraffe just thinking about that!

And Grimek trained hard, hitting the gym five or six times a week and training for up to several hours a session!

And his advice for anyone that wanted to start building a muscular physique?

Well it was refreshingly simple:

“Train consistently 2-3 days per week and add weight to the bar whenever possible and get lots of rest, eat good food and drink plenty of water.”

Grimek’s best lifts were as follows: 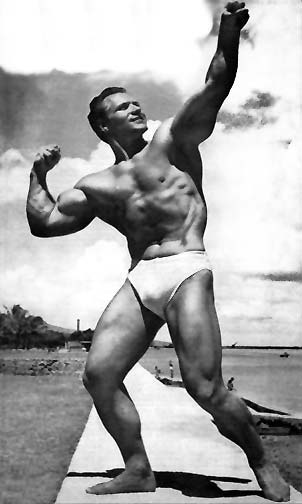 After retiring from the sport, Grimek went on to write articles on bodybuilding and strength for a range of publications including ‘Strength & Health’ and ‘Muscular Development’.

During this time he still continued to train with the same intensity in the gym.

Well after retirement, for example, he could still squat 400 pounds for reps.

A year after his death, in 1999, he was inducted into the IFBB Hall of Fame.

John Grimek was undoubtedly of the most important bodybuilding icons of the twentieth century.

His achievements, like Sandow, Park and Schwarzenegger, did much to advance the sport, inspiring generations to pick up a dumbbell in a bid to become the ‘next John Grimek’.

He was also kind, humble, a true gentleman, and he never once turned down a challenge.

But, perhaps most sadly, John Grimek was the last of a generation of bodybuilders that were just as strong and athletic as they looked.

He earned every ounce of muscle the old fashioned way.

Bring back the Golden Era, I say.