In a recent post, we looked at an old-school 1940s bulk-gaining routine from former Mr America Alan Stephan, which serves as a great introduction to full-body training and building a classic physique the natural way.

But like any abbreviated beginner’s workout, such a schedule can only take you so far, and before long progress will stall.

Well, what the buggery bollocks do I do now?

What happened to all those beautiful gains?

Maybe it’s time to hang up your gym vest for good, take up ping pong, and start quoting Hamlet’s “What a piece of work is a man” monologue to girls on Tinder?

Fuck it, it’s not all about massive muscles, chicks are equally impressed by sublime carpal dexterity and existential rhetoric, right?

Just slow down, put the Battenberg cake down, and don’t throw in the towel just yet.

At a fundamental level, to keep progressing, you need to, as Greg Nuckols points out in this excellent article, simply train your body to be able to handle and adapt to more stress (work capacity).

This will enable you to train harder and for longer, which means better results

When graduating from a novice routine, a simple way of achieving greater work capacity is to increase volume as well as variety of movement.

Moving on from Alan Stephan’s routine, or any other beginner size and strength workout, a more comprehensive routine should be pursued, and in this post we are going to look at an excellent ‘next step’ full-body programme from one of bodybuilding’s true superstars.

Larry Scott, “The Legend”, was an American bodybuilder and back-to-back winner of the first two Mr Olympia titles in 1965 and 1966. 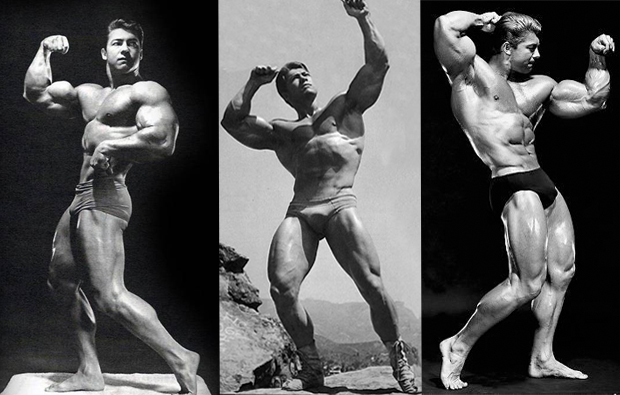 Combining a charming and friendly demeanor with 20-inch biceps, colossal deltoids and a huge beer-barrel chest, Scott was an extremely popular figure who helped elevate the sport of bodybuilding from a cultish activity to a worldwide phenomenon.

After retiring unbeaten from the sport after his second Mr Olympia title, he continued to popularise bodybuilding around the globe, working as an in-demand trainer and amassing an impressive catalogue of books, interviews and magazine articles.

Despite his later success, Scott was a notorious hardgainer; when he started training in the mid-1950s he was a 5’9″ waif with very narrow shoulders.

As the man himself reflects:

Muscle did not come to me naturally, I was one of those 98-pound weaklings who was motivated to use bodybuilding training to get bigger.

One of Larry’s favourite routines for building mass when he started out was the following routine, a full-body workout which comprises one major exercise for each muscle group and a considerable amount of volume (around six sets of eight reps for each exercise).

Despite Scott being a ‘first generation’ steroid user in the 60s, this routine is still firmly rooted in the tried-and-tested principles of the pre-steroid era, and is perfect for the intermediate bodybuilder who wants pile on muscle mass and bodyweight naturally.

It is important to remember that although Scott moved to a split routine model later in his career when he stared using steroids, he built his foundation naturally, just like Arnold Schwarzenegger, by using full-body routines three times per week.

This workout should be performed three days per week on alternate days, allowing for a full day of recovery between each session.

Any strenuous cardio or activity should be avoided during your rest day, preventing any unnecessary drain on the body’s recuperative powers and channeling optimum resources into muscle growth.

Aim to get at least 8-9 hours uninterrupted sleep every night.

The routine is designed with the intermediate to advanced bodybuilder in mind, hence the high volume.

More novice lifters attempting this routine, or anyone new to full-body routines, should start with two or three sets per exercise and add another set every month. 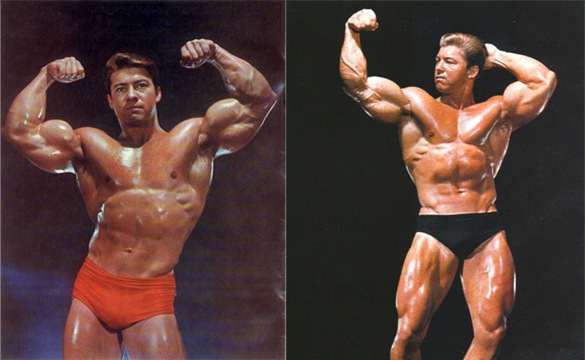 For each exercise, start with a weight that you can lift without too much trouble for the prescribed number of sets and reps.

For every exercise that you can perform the maximum prescribed reps for every set, increase the weight by 2.5kg/5lbs for the next workout.

We recommend keeping a training log to keep track of your weights/reps for each exercise.

Gradual progression (progressive overload) is key here – don’t rely on just your memory to remember what you did last workout, keep it accurate with a log book and you’ll become more systematic and effective in your training.

Aim to minimise rest intervals between sets, taking no more than 60 seconds, or enough time for your training partner to complete their set.

Scott would complete the next set as soon as possible after the previous set in order to keep as much blood as possible in the muscle and maximise the pump.

All reps should be performed in smooth and deliberate manner, concentrating on proper technique as much as possible to maximise the ‘burn’.

The ‘bench press to neck’, more commonly referred to as ‘neck press’ or ‘guillotine press’, was favoured by both Larry Scott and his training partner, the “Iron Guru” Vince Gironda, over the standard bench press.

Reputedly, it was the only type of bench pressing Scott ever did.

To perform it, instead of lowering the bar to your nipples, as you would in a standard bench press, lower it to the where your upper chest and neck meet.

This allows you to really isolate the upper chest without over-activating the shoulders.

Full instructions from the Iron Guru himself can be found here.

Larry Scott was one of the first bodybuilders to espouse the vital role of nutrition in bodybuilding, as he firmly believed it was the real secret to building maximum muscle size and definition:

It is my opinion that 75% of the battle to build a better body is proper nutrition.

Exercise and proper rest and sleep are also of major importance, but diet builds muscle tissue when the exercise stimulates the body to grow.

Like Vince Gironda, Scott advocated a high-protein diet with lots of healthy fats and hardly any carbohydrates (no more than 50g a day).

Scott ate a lot of meat, fish, dairy and eggs (beef and cottage cheese being his favourites), a few vegetables, and consumed a huge amount of protein powder (mixed with milk and cream).

Anything made of sugar or flour was ruled out entirely (bread, pies, cakes, sweets) and fruits/fruit juices and other high-carb foods (potatoes, rice, beans, pasta, beer and ale) were avoided as well.

Larry Scott’s Intermediate Mass-Training Routine is the perfect workout for any trainee looking to graduate from an abbreviated full-body programme to something with more volume/intensity.

It’s also highly recommended for anyone who’s been split training for a few years and is experiencing staleness and/or a lack of progress .

As Vince Gironda pointed out in an interview, “Larry’s real secret was hard work”, and with this routine you’ll definitely be going all out, performing over 40 sets per session and putting your whole body through the ringer.

Remember to get as much rest and sleep on non-training days as possible, consume as much high-protein, low-carb foods as you can, and your body will find it impossible not to pack on impressive muscle size and definition!

Have you tried this routine or are thinking of giving it a go?

As always I’d love to hear your thoughts in the comments section below!