The GymTalk Guide To The 2016 Rio Olympic Games

The GymTalk Guide To The 2016 Rio Olympics

With Euro 2016 finished, Europe’s richest racists and rapists can fuck off back to their gated mansions decked out in “tasteless twat” by Rocha John Rocha.

Invented by the Ancient Greeks, who also invented homosexuality, the Ancient Olympics was a way for men to sit around watching other naked men grapple, grunt and generally kick the shit out of each other, much like the modern day Rugby World Cup.

Nowadays, the Olympics stays true to its roots by inviting the world’s greatest sportsmen and some women to take part in three weeks of intense competition to determine who is the undeniable champion of their chosen sport.

Or in the case of golf, which in the spirit of capitalism was granted a place in the 2016 Olympics, who has a modicum of interest in competing.

And despite the social unrest in Brazil, we at GymTalk cannot wait for the Games of the XXXI Olympiad to start, so much so that we’ve put together a handy alphabetised guide to all 28 sports with in-depth, expert analysis of the events where the greatest examples of strength will be on show.

Divided into four different disciplines, here is a quick precis of the aquatics events on show at the Olympics:

Swimming takes precedent for the first week of the Games with a show of strength, endurance and the art of fitting into a costume at least two sizes too small.

Unlike running, there’s little difference in the physiques of those doing 50m events to those doing the long distance swims, but expect to see extreme posturing before the men’s 50m freestyle final.

Swimmers then get to spend the next 10 days getting shit-faced in the athletes’ village – marvellous.

Archery was invented by Britain during the Battle of Agincourt.

Previous wars with the French had taught the British that the French had a serious underarm stench so it was deemed both militarily and hygienically prudent if we just arrowed the shit out of the French army from distance rather than going tête-à-tête.

A sport of speed, agility and being Asian.

I enjoy badminton because I like the concept of someone following you around mopping up your sweat after each game.

A lobbying decision fully funded by USA TV corporations to allow USA and Lebron James to totally dominate the rest of the world at one sport and prove that white men can’t jump, sorry Woody Harrelson.

Basketball is another of those sports that really shouldn’t be at the Olympics since it’s patently not the pinnacle of the sport… this is of course the NBA annual Slam Dunk contest.

Expect some colossal heavyweight bouts with bulging biceps and unmitigated levels of perspiration.

Bonus points are awarded if someone disagrees with a split decision and twats the ref in the face.

Deltoids like cannonballs, canoeistas, as I believe they are called, probably rank among the strongest sportsmen at the Olympic Games with massive upper body and core strength.

There’s also something mesmeric about watching the team canoe races, reminiscent of cub scout raft races when you were younger, just without the paedophilic undertones and repressed memories.

Now, we’ve hated on cyclists a lot on this blog, and with good reason.

But cycling is so multifaceted that there will be a plethora of different sizes and shapes on show.

The road cycling will feature the malnourished size 0 models but the track cyclists have never skipped leg day.

Capable of getting up to 70kmh, these guys are more like race horses than human beings, with granite legs the size of Nelson’s column bursting with fast-twitch fibres.

Cycling is high octane viewing interspersed with that funny man who rides around the track on the Keirin bike. 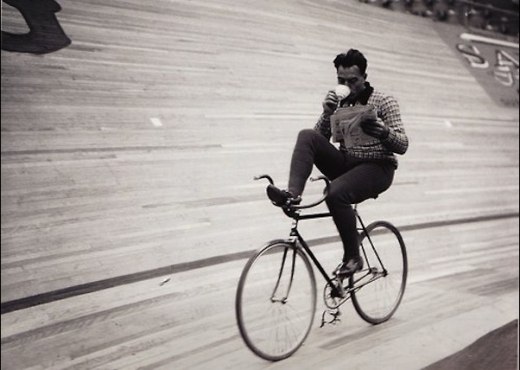 Massive quads and hamstrings, highly-tuned, skilled athletes at the top of their game being ridden by posh twats in stupid hats.

Is this some kind of joke?

Don’t make me sick in my mouth.

Gymnasts are the Sultans of Swole, and when your full time job is basically performing pull ups, dips, box jumps and ab crunches, you will be big.

Anyone interested in strength and conditioning should watch the gymnastics, it’s a bit like the CrossFit Games but they don’t give away handguns as prizes.

Check out the men’s ring competition if you want to be amazed.

What, that’s a sport?

A favoured sport of world boss Vladimir Putin, co-incidentally no Russian athletes have been banned from the Judo competition at the Rio Games.

Judo is unfortunately not as exciting as you might think growing up playing Street Fighter 2.

You won’t see a Japanese man throwing someone from the middle-east with extendable arms into a fence.

Although I guarantee you will see some of the Rio locals smashing up cars.

No, judo is really just two people in dressing gowns grappling, like much of the north of England after a big Friday night on the sauce.

Someone was really taking the piss when they thought up the modern pentathlon.

I can just imagine some sort of Withnail and I-esque scenario with two big posh toffs being given a £50k budget to come up with a sport for modern sportsmen and women.

Doesn’t get more post-modernist than that.

Six minutes of continuous leg press, deadlift and barbell row… that can’t be too hard right?

Rowing is perhaps the most physically demanding sport at the Olympic Games, with a 2k race purported to being as strenuous as two back-to-back basketball games… I mean that amount of whoopin’ and hollerin’ can be pretty tiring.

With Rugby 7s back in the Olympics, the rowers’ crown of biggest drinkers at the Games may well be under threat.

Expect to see big posh toffs with acres of floppy hair hitting on the beach volleyball teams once the regatta is over, lovely stuff.

A new addition to the Olympics and definitely a welcomed one, Rugby 7s is a more free-flowing version of the standard union game with emphasis on speed and power rather than technique, guile and being 18 stone.

Expect the southern hemisphere teams to dominate with some big hits and speedy bastards from the South Islands.

Another sport with very little interest outside of its core following, probably the most interesting thing you’ll see in the sailing events will be dismembered bodies strapped to buoys or floating around the harbour from some sort of favela-related cartel wars.

There will be lots of shooting in Rio.

Asian’s and ping pong balls, sounds like a night out on Bangla Road.

Surely this should’ve been replaced with Brazilian Ju-Jitsu?

Taekwondo is a fairly tedious sport to watch, except when they manage to kick each other in the face, and then it’s brilliant.

Let’s just gloss over this one…

The headline sport of the Olympic Games with the Men’s 100m being the Blue Riband event.

Much like the sport of bodybuilding, this will see steroid-addled, genetically superior African American athletes putting the proverbial hurt upon inferior, weedy Caucasian sprinters.

The throwing events in particular look like a line up from World’s Strongest Man.

Track and field provides an amazing smorgasbord of physiques, from tall but weedy Kenyan long distance runners, to jacked sprinters, to short but squat long jumpers to mammoth shot putters.

On that note, how hard can it really be to train for long jump?

Presumably a few box squats here, a few sprints there, then a bit of lunch?

A horrendously difficult-looking sport with two hours of intense cardio, expect to see athletes literally collapsing across the finish line.

A proper spectator sport, much like watching Baywatch for the cinematography.

Weightlifters may not have the physique you’d expect from people who can lift 2-3 times their bodyweight overhead, but this is mainly due to them not working the negative phase of the rep.

It’s one thing to throw 200kg overhead when you’re 70kg but lowering it in a controlled manner… no way.

As such, weightlifters are strong as fuck without being overly bulky.

Except for the super heavyweights, who are just fat blokes.

The stakes don’t get any higher with the Olympic lifting competition, you can see it in the eyes when the gold medal is at stake and you need to lift 5kg above your PR… that mix of terror and adrenalin, fight or flight, lift the barbell or irrevocably break your elbow.

This is the modern day Colosseum where champions are made, and there have been few sporting contests as riveting as this show-down from Atlanta ’96:

It doesn’t get much more ancient than wrestling.

With men and women who look like men grappling it out to throw their opponent onto their neck or out of the arena, wrestling truly is the most base level of sporting competition: kill or be killed.

There are two types of wrestling on show at the games, freestyle and Greco Roman, but I’ll be damned if I could tell the difference between the two.

And thus, a comprehensive view for all gym-going sports fan of what to watch to see the biggest and strongest athletes at the Rio Olympics.

A final shout out goes to the Paralympic Weightlifting competition, particularly British Athlete Ali Jawad, who with no legs benches near enough 200kg, outstanding.

We hope you enjoyed our guide and we’d love to hear your thoughts in the comments below!