Xiaojun is the current Olympic Champion and World Record holder in both the ‘Snatch’ and ‘Total’ in the Men’s 77kg (12 stone to us yobs) category, where he lifted 175kg in the Snatch, and 379kg in the Total (‘Snatch’ and ‘Clean and Jerk’ combined), respectively. 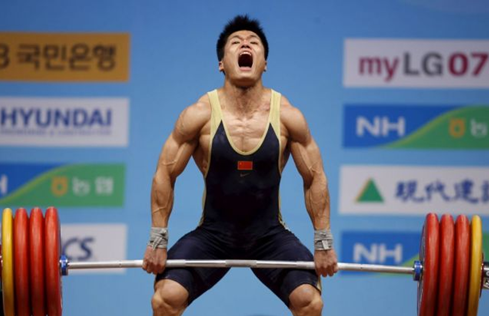 I first laid eyes on Lu Xiaojun (not gay) at the London 2012 Olympics, where, like many others, I had gone through the painstakingly laborious and self-proclaimed ‘simple’ process of getting tickets for any event I could.

I was disappointed not to get front row seats at the Men’s 100m final (still not gay), but getting into the weightlifting finals was a blessing in disguise.

The irony being, of course, that Lu Xiaojun started his athletic career as a sprinter; he only started lifting weights at 18.

Each weightlifter gets three attempts at each discipline, with their heaviest successful lift resulting in their final placing.

The session began with a lot of ‘sparring’ lifts – just something to get on the board.

Lu Xiaojun started the competition by throwing around 170kg like it was an insignificant pile of shit, with the same force as a piece of farmyard machinery or the crusher in Star Wars.

He remained focused, sweat-free and polished, like he had been manufactured from a vast, spotless factory in the port city of Qingdao.

Note: lack of sweat could’ve been down to Lynx Africa rather than good composure.

It didn’t take long for before the final started to unfold like a Shakespearean drama.

The 2008 Olympic Champion, Jaehyouk Sa, dislocated his elbow (see below) and made the types of noises only whaled by injured wildebeest across the African planes.

Lu Xiaojun went into the clean and jerk stage as the competition leader and new favourite.

He was closely followed by his fellow countryman Lu Haojie, who also went on to injure his elbow, albeit in a less disfiguring manner.

Xiaojun was like Macbeth tearing the limbs from his opponents.

His teammate, Lu Haojie, heroically lifted an impressive 190kg whilst he was literally CRYING with pain from his injury, whilst Xiaojun, now seeming like the villain, made a steely lift of 195kg into gold medal position.

Xiaojun then welcomed his coach onto the platform for a victory parade, who crept up the stairs and emerged looking like some sort of Bond villain.

You can watch the drama unfold here.

What you can achieve without steroids

Now someone cleaning and jerking 195kg may be a difficult concept to get your head around, but, translated into a more ‘gym-centric’ language, Lu Xiaojun boasts a catalogue of impressive lifts.

This includes a front squat of 230kg for reps, but more impressive than that is the physique he has achieved naturally.

Now I understand the CT Fletcher debate – but there is no argument on this whatsoever.

Lu Xiaojun is 100% natural and drug-free in the eyes of the IOC.

But it’s easy to see why people can’t believe it – just Googling him for this blog proved that. 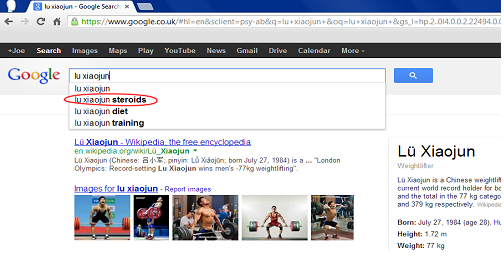 He has back development that wouldn’t look out of place on any bodybuilding stage, natural or otherwise, and you can tell he’s not pissing around with bicep curls and calf raises either.

I can only hypothesise on his training schedule, but it clearly stresses the pivotal impact compound movements have to any strength programme, giving him the same potent and auspicious powers possessed by a Chinese Dragon.

In bodybuilding, so many things are too good to be true, and finding a source that illustrates what you can honestly achieve naturally is about as rare as meeting a black man called Graham.

Although I will never achieve what Lu Xiaojun has (in my defence it’s his full time job – if you’re 9-5 is going to the gym, you WILL get big), it’s encouraging to find something which is certified natural in its most honest sense.

He’s shifting more weight than an IFBB pro WITHOUT steroids and at about half the bodyweight. 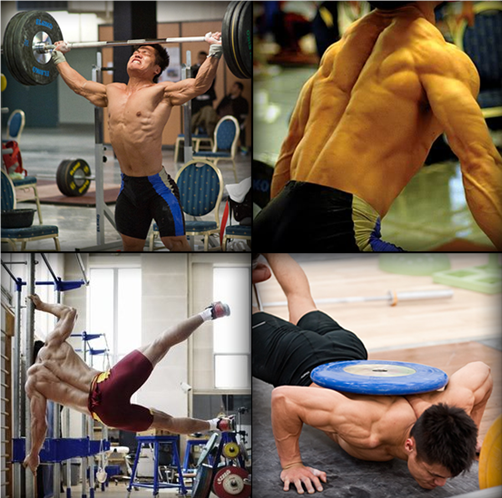 Compare this to the claims of a CT Fletcher type and you’ll quickly conclude he’s talking absolute cobblers/fucking bullshit.

So here it is, this is what can be achieved naturally and with a compound based workout and a diet that looks like something fresh out of Wing-Wah.

Hopefully you enjoyed the take away, but if you didn’t, here is a 4ft 11” man lifting three times his own bodyweight.

What are your thoughts?

Do you have an opinion on this oriental powerhouse?

Sound off in the comments below.

Three times failed Big Brother applicant and local hero Joe is an enthusiastic gym-goer who spends the majority of his time dead lifting or bench pressing. When not in the gym, he can be found in ‘The Dog and Duck’ bicep curling a pint of Guinness until failure. Just imagine the humour of Ronnie Coleman, the passion of Kai Greene and the anger of Branch Warren fused into one little weird bloke from England (If that’s at all possible).