While I have reservations about some of its ingredients, I found Dynamo to be a highly effective (albeit horrible-tasting) pre-workout supplement which provides exceptional value for money.

“When I was in the National Service, every morning would start at 5am when a bucket of cold water was thrown over your bed and a drill instructor spat in your face and called you a c**t.”

This was the anecdote my dad would recount to me when I was nine years old and didn’t want to get up to go swimming before school.

Suffice to say, in the old days, getting your arse in gear for a workout chiefly involved the “short sharp shock” school of thought: a cold shower, a few home truths, maybe a cup of coffee, but most of all, a healthy dose of pulling yourself the fuck together.

These days, however, workout motivation, just like everything else in the fitness industry, has become a commodity.

It is packaged and sold, whether in the form of ‘epic motivation’ YouTube videos or as one of the latest ‘must-have’ trends in supplement industry: pre-workout formulas.

In the past, like Greg, I’ve been rather scornful of the pre-workout crowd.

It’s not so much the products themselves, more their hammy marketing and typical clientele.

Most pre-workout aficionados, at least in my gym, would slot right into the I-want-to-plant-a-flying-elbow-right-in-your-face category.

Clad in back-to-front baseball caps and shit tattoos, they’ll perform endless hammer curls, guzzle down this neon liquid, and exclaim what a ‘sick pump’ they’re getting.

But, in the spirit of broadening horizons, and as I do write for a bodybuilding blog, I decided it was time to try one of these supplements out.

After all, anything that can help elevate the intensity of your workout can only be a good thing, right? 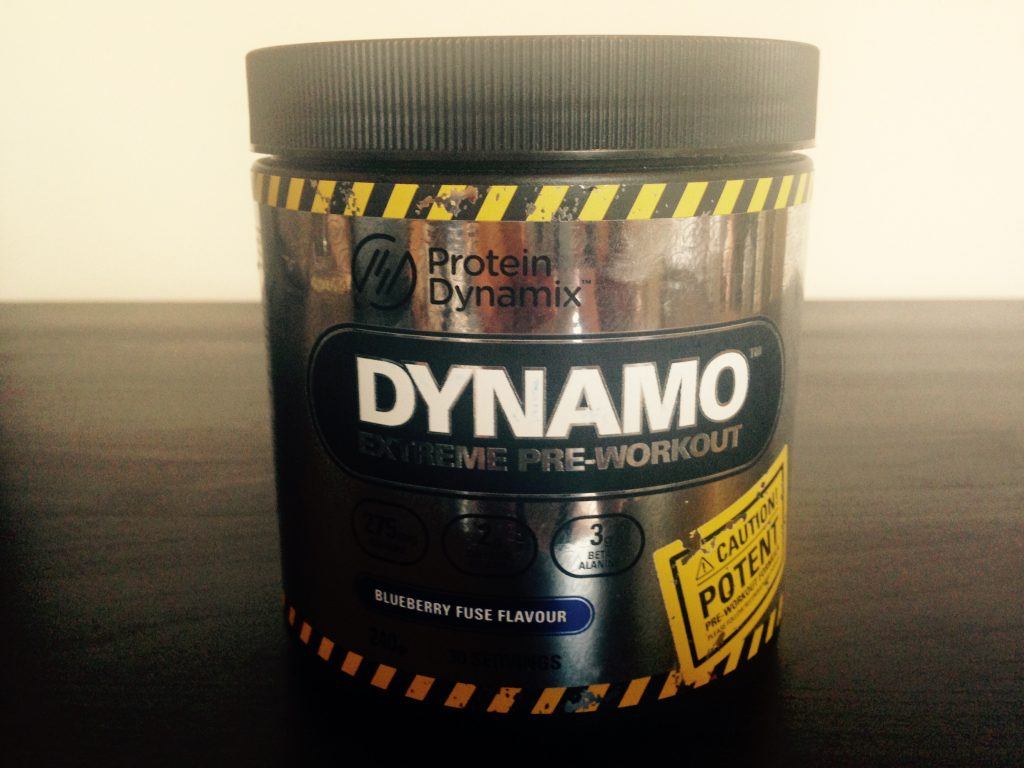 Dynamo is an “extreme pre-workout formula” from UK supplement company Protein Dynamix, which is designed to help boost energy and focus during your workout.

Like most of the Protein Dynamix range, Dynamo is a kind of no-frills supplement, forgoing fancy ingredients and relying on the basics.

It is currently available in two flavours, “Raspberry Blitz” and “Blueberry Fuse”, of which I tried the latter. 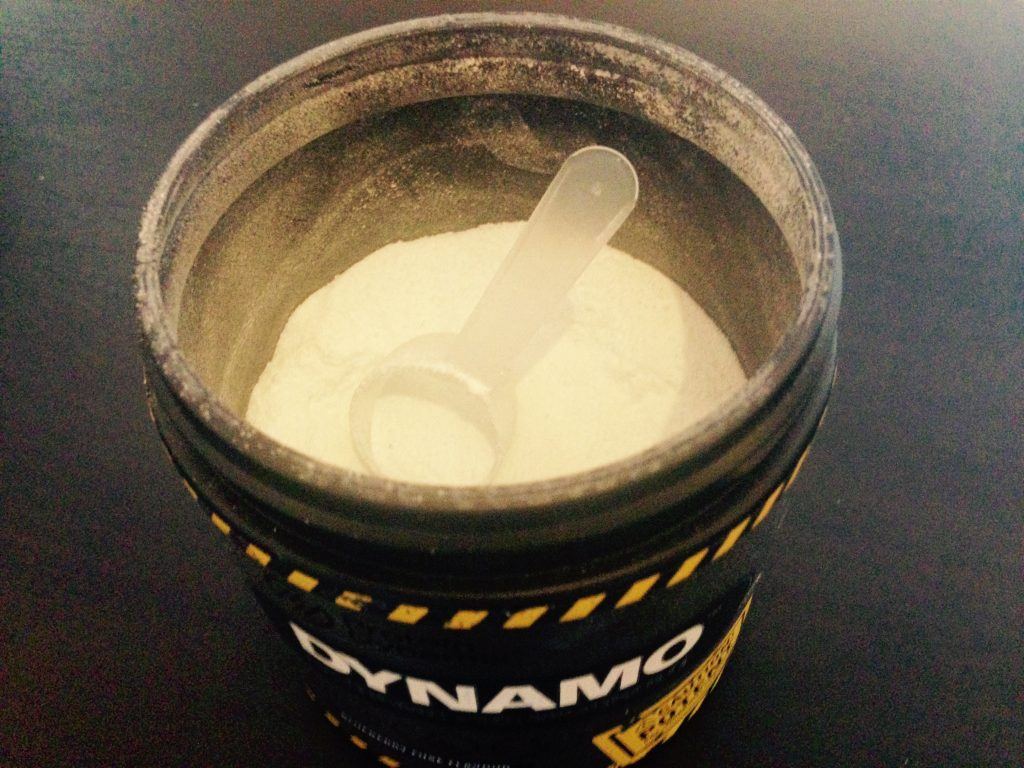 Importantly, Dynamo is completely transparent with its ingredients.

Many other pre-workout formulas consist of proprietary blends which will hide the exact dosages, often in an attempt to cut costs.

If a product does this, treat it with the same caution you would a skinhead giving you unsolicited advice at a fruit machine.

Per 16g serving of Dynamo (three scoops), the exact ingredients are as follows:

Caffeine is one of the few (legal) ingredients out there which is a proven ergogenic aid (enhancing both endurance and physical strength), and boasting a substantial 275mg per serving (about the same as 2-3 cups of coffee), Dynamo certainly packs a punch in this regard.

Further boosting the stimulating effects of Dynamo is beta-alanine, another proven endurance-boosting ingredient, with literature showing that it can allow people to perform a few extra repetitions in the 8-15 range.

3g is a perfectly adequate dosage but may leave you with a harmless tingling feeling (paresthesia).

Betaine (trimethylglycine or TMG) is a nice addition, with recent studies showing it to be another ergogenic aid similar to creatine.

And, on that note, good old tried-and-tested creatine is also in the mix here, in the form of creatine nitrate, which although has generated a lot of hype recently, is yet to have its supposed benefits versus other creatine forms officially verified.

Niacin is a b-vitamin (B3), not really sure what it’s doing in the mix, it’s not going to affect the intensity of your workout in any way, other than maybe causing a flushing feeling (mimicking the effects of beta-alanine), perhaps to try and make the user feel that magic is afoot.

Amino acids citrulline and arginine are often used together in pre-workouts to provide performance boosting properties, however research favours a higher dosage of citrulline rather than a combination of the two.

As such, I would have liked to have seen a higher dosage of citrulline (5g plus), but presumably that would increase Dynamo’s price tag.

No point beating around the bush: taste is not a strong point of Dynamo.

“Blueberry Blitz” doesn’t really taste of blueberries, more a kind of bitter bubblegum (not as marketable, clearly), which doesn’t go very far in masking the chemical-like taste of some of the ingredients.

Pretty rancid, to be honest. 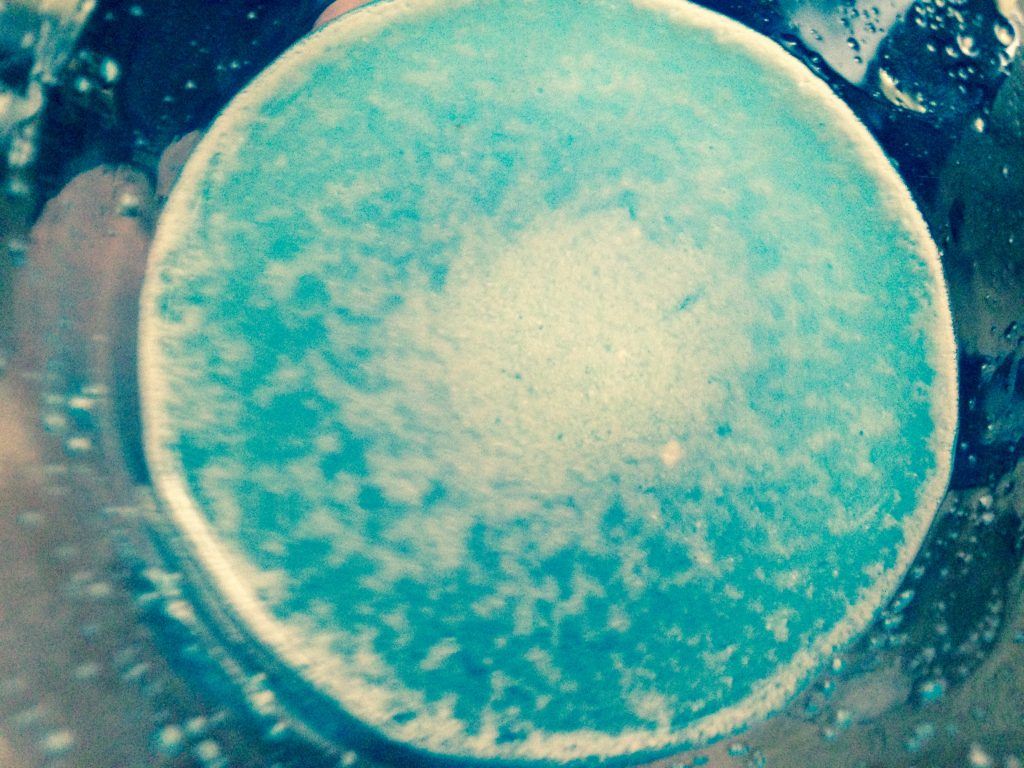 Texture-wise, the powder dissolves reasonably well on shaking, but there was quite a lot of froth and a few salt-like crystallised bits which were left as a residue.

To be honest, none of this bothered me, and it shouldn’t you, as, like a 4am kebab, a pre-workout is something designed to be banged back rather than savoured.

My current workout programme is based on the Steve Reeves Classic Physique Routine.

Being a high-volume full-body workout, which typically clocks in at around the two hour mark, this seemed the perfect testing ground for a pre-workout supplement, as the routine itself is bloody hard work, demanding a fair amount of mental stamina in addition to some pretty intense physical exertion.

I took the recommended three scoops before my workout and began to feel its effect within 15 minutes.

Standing outside the gym at 8am on a Saturday morning in the freezing cold, I usually feel myself gripped by an existential malaise while wishing a horrible death on the bodycombat ladies who insist on discussing their marital affairs at an ungodly volume.

On this occasion, however, with Dynamo grabbing me by the balls, I was ready to do some damage in the weightroom, and Debbie’s anecdote about her infant son was not making me want to commit a hate crime like usual.

This energy level continued as I got into the gym, and I certainly felt the effects of Dynamo’s stimulants throughout the duration of the workout.

Noticeably, I seemed to require less rest between sets (often taking one minute rather than my usual two), and once I finished the routine (which I completed much quicker than usual), I spent another 20 minutes smashing through some high-volume finishers.

During these finishers, where I was performing up to 20 reps per exercise, I also felt a pretty incredible pump, like my muscles were being inflated, which took me somewhat by surprise, but in a good way!

Post-workout, I experienced no crash whatsoever, an after-effect which seems to plague other stimulant-heavy pre-workouts.

Conscious of dulling the effects of Dynamo’s stimulants through habitual use, I have decided to use the product sparingly, usually taking it once a week when I feel the need for a pick-me-up.

After six weeks of taking Dynamo in this manner, I continue to feel its effects, although it must be said that no other session has come close to matching the intensity of that first workout.

At £17 for 30 servings, Dynamo provides exceptional value for money as far as pre-workouts go, retailing at a fraction of the price of some of its competitors.

Plus, most of the time it seems to be on offer on the Protein Dynamix site, which, at little more than a tenner, makes it ridiculously cheap.

The reason you take a pre-workout is to boost performance, and in this department alone, at least for me, Dynamo certainly delivers.

As a pre-workout virgin with a fairly low caffeine tolerance, perhaps I felt the effects more than other stimulant veterans, but I can say with complete conviction that this product helped up the intensity of my workouts.

Even if you’re a pre-workout skeptic or have had a bad experience in the past, at such a low price point Dynamo is definitely worth a punt to see if it works for you.

You can purchase Dynamo by shopping here at the Protein Dynamix website.

Don’t forget to use a Protein Dynamix discount code when checking out to save yourself a bit of extra cash.

Have you taken Dynamo pre-workout or are thinking of giving it a try? 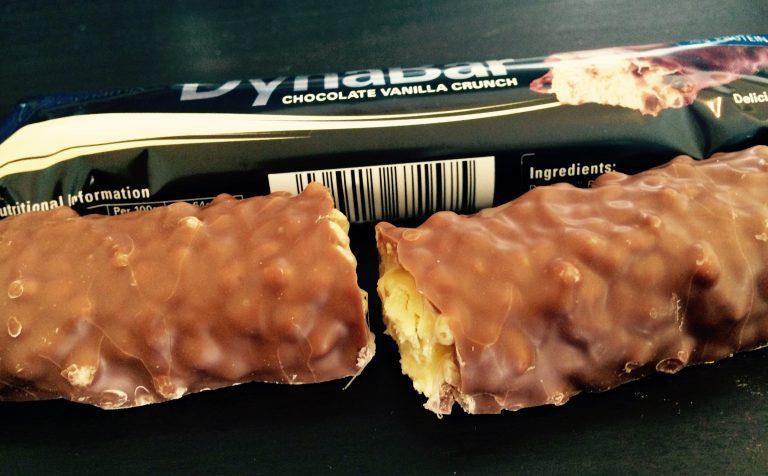