What Not To Wear In The Gym

What Not To Wear In The Gym

The gym is a microcosm of society in that most people either (a) don’t have a clue what they’re doing or (b) are so egregiously annoying that you wouldn’t think twice about clubbing them to death with a cricket bat and feeding their remains into a sausage mincer.

In most gyms, there will be a select few that combine both of these qualities, creating a perfect storm of fucktardery.

An easy way to spot one of these monumental dickwits is to note what kind of gym gear they’re wearing.

If they tick any of the boxes below, it’s probably best to treat their lifting advice with the same regard you would a Wayne Rooney Facebook post explaining the first law of thermodynamics.

Essentially, just do the exact opposite of everything they say and do, and you’ll be well on the way to meeting your fitness goals.

Wearing gloves to lift weights is an oxymoron.

It’s like saying, “yes, I want to be strong, manly and muscular, but I also want my hands to resemble those of a 12-year-old Japanese geisha.”

No self-respecting male can justify the use of gloves by saying they don’t want calluses.

Calluses are trophies to be proud of, marks of good old-fashioned manliness, up there with being in charge of the family BBQ, felling trees and liking Sean Connery best as James Bond. 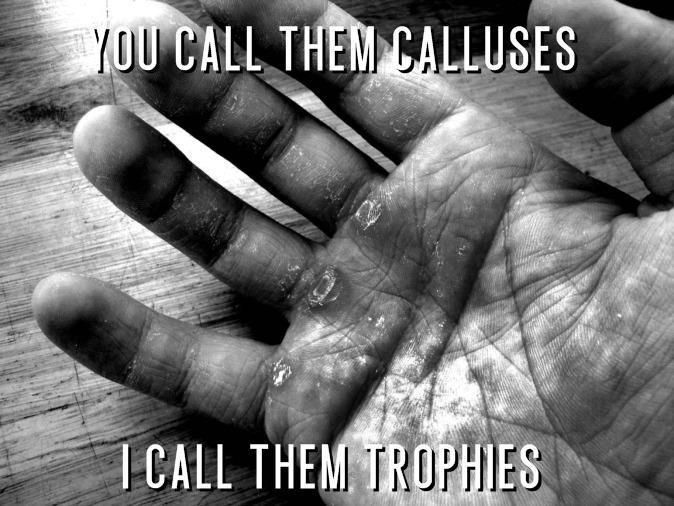 Plus, aside from making you look like an absolute tool, gloves can negatively affect your lifting potential.

By adding inches to the bar they make it harder to grip, and they also screw with your technique by making it harder to keep the bar close to your wrists on the press and bench, causing your wrist to roll back which can lead to wrist pain.

If you really want to minimise callus formation, just use chalk and learn to grip the bar properly.

Now straps can absolutely have a place in the gym.

If you’re training for a powerlifting meet by all means use wrist support now and again to try and add a few extra pounds to your PR.

But if you’ve been training for six months and are using straps to support an 80kg deadlift which looks more like a ruler being snapped in half by a handicapped schoolboy, then, no, you should not be using straps.

Sure, straps will allow you to ego lift a little more, but you’ll be neglecting wrist development, which is an essential foundation of lifting heavy.

And, besides, that hottie in the flesh-hugging lyrca you’ve been trying to impress with your ego lifting thinks you’re an arse trumpet just like everyone else.

Simply put, you’ll never build a really strong deadlift if you rely on wrist straps when starting out.

Straps make up for your deficiency without addressing the root issue.

It’s like the rich kid at school – you hang out with him because he’s got football boots signed by Alan Shearer, a drum kit worth £3k and sweets that they only make in America.

So forget the straps and focus on building wrist strength.

Grip the bar hard, use chalk, and focus on form with light weight before you give yourself a hernia.

The same goes for belts – they absolutely have a place if you’re well past the beginner stage and are hitting some heavy singles at 90% of your one rep max.

But if you’re starting out, or your squat looks like you’ve been hit by a Voldemort Cruciatus curse, just lose the belt, as wearing one can do more harm than good. 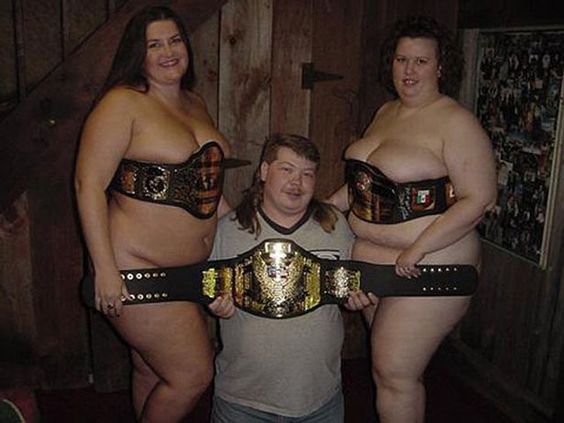 The support they offer will give you a false sense of security without addressing which is usually the main problem: piss-poor technique.

Not to mention, constantly wearing a belt, to perform everything from tricep pulldowns to your mid-workout slash, is a sure sign that you fuck badgers.

Try and get your head around this: there are people that exist on this planet that think it’s a good idea to wear flip flops to the gym.

On a scale of obvious tosser to professional supercunt, this has to rank pretty highly – whopping wanker? mega dickhead?

It’s so spectacularly and unbelievably ridiculous, the first time I saw this phenomenon I thought it must be a glitch in the Matrix.

I half-expected to see a talking crab scuttle out of the changing rooms and my gym buddy to rotate his head 360 degrees.

Wearing flip flops to the gym is just plain embarrassing not to mention idiotic.

It’s like these people have quantum stepped here from a parallel dimension where people are not aware of gravity.

Rocking up to the gym with flip flops is on the same public embarrassment level as having a sex tape where you fuck a huge plastic pterodactyl leak on on the internet.

Maybe it’s just me, but few things make me as irate as seeing an adult human being wearing a back-to-front baseball cap.

You’re 30 years old with a wife and kid yet you model yourself on Brian Harvey circa 1994.

If you want to let everyone in the world know that you have the IQ of a headless otter, wear a baseball cap to the gym.

If you want your DNA to cry itself to sleep every night, wear a baseball cap to the gym.

If you’re a fully grown man, there’s just no excuse for this kind of behaviour, especially if you’re going to insist on wearing it back-to-front like you’re a member of Kriss Kross.

You’re not Bart Simpson, grow the fuck up.

If you’ve ever encountered someone in your local gym wearing an altitude breathing mask, it’s like a harbinger of the apocalypse.

I haven’t read the Bible recently, but I’m sure that altitude masks are there in the Book of Revelation, alongside giant locusts, trumpeting angels and England winning a major football title.

Now I understand the concept behind this, that by restricting the amount of oxygen available during exercise you make the workout harder (although the actual science behind these masks has been completely refuted by experts), but Shane from Peterborough wearing one for his HIIT class is like Krusty putting alloy wheels on his clown car.

More on their utter uselessness (and a bit more science as to why) in this video by Greg Nuckols.

Ultimately, these masks are just another fitness fad with dubious backing, and using them to enhance your workout is going to be about as effective as a Victorian gentleman racing a penny farthing at the Monaco Grand Prix.

At the end of the day, you’d be better off simulating a lack of oxygen by just shoving a sock in your mouth.

You’ll still look like a bellend but at least you’ll be £100 better off.

Every gym nowadays seems to have that one guy who wears a tapout t-shirt and shadowboxes in the free weights area.

They’ll take up half of the gym for a workout which can only be described as “absolute fucking bollocks” and wouldn’t look out of place on a special needs version of Total Wipeout.

This Anserson Silva-wannabe will insist on training in bare feet and grunting like they’re sparring with Bruce Lee in Way of the Dragon.

In reality, they’ll sound more like an out-of-breath piglet being sodomised by a Tory politician, and their workout will look more like they’re auditioning for Britain’s Biggest Tosser.

Get the fuck out, this is not an episode of The Ultimate Fighter, it’s Fitness First Ipswich and you’re a part-time shelf-stacker (full-time arsecandle).

At all costs, heed these words and preserve your dignity in the gym.

And if you ever come across an MMA enthusiast wearing flip flops and a baseball cap who lifts with straps and gloves while breathing into an altitude mask, then you’ve hit the wanker-spotting jackpot.

Tweet us a picture and we’ll send you a prize.*

*Monetary value of no more than £1.

What gym gear and fitness apparel would you add to this list?

Agree or disagree with any of these points?