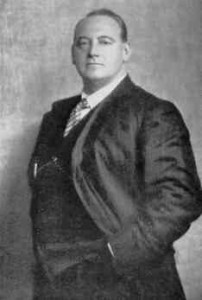 When it comes to legends of British bodybuilding, few have surpassed the enduring contribution made by Thomas Inch, the ‘Scarborough Hercules’.

Although he might look like a portly butler from Downton Abbey, Inch was, throughout his life, one of the world’s strongest men, performing feats of circus-hall strength which far eclipsed those of the great Eugen Sandow.

Of these, the most notable was the incredible – and now infamous – ‘Thomas Inch Dumbbell’, a lift which has cemented its place in strongman lore.

But perhaps his most significant contribution to the fraternity of bodybuilding was his pioneering introduction of plates for dumbbells and barbells.

Without Tom Inch, we might still be lifting clumsy globes filled with lead.

(This is just rhetoric, of course – I’m sure if we can invent nuclear power and fly people to the Moon, some boffin would have figured out a way to make a dumbbell smaller.)

Through his many contributions, Thomas Inch was ultimately the man who bridged the gap between the old school circus-hall lifters and the thriving culture of bodybuilding as we know it today.

This is his story… 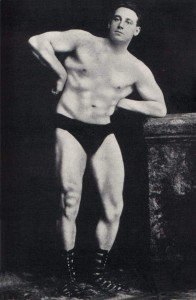 Thomas Inch was born on December 17, 1881 in Scarborough, a seaside town on the North Yorkshire coast.

He became interested in bodybuilding and strength as a young boy.

Like many of us, he wanted to be strong, and he wanted big muscles.

Inch learned from his parents that one way to achieve this was through manual labour, so he procured a shovel and dedicated his time to digging up his parents’ garden, stooping in rhythm, day in, day out, much to the bemusement of his neighbours.

(Whether or not this was a crafty ploy by his parents to facilitate a new patio is unconfirmed, but quite probable.)

From these honest beginnings, Inch would dedicate the rest of his life to the pursuit of muscle and strength, living and breathing weightlifting until his death in 1963.

In 1902, aged 19, Inch was hailed indisputably as the ‘World’s Strongest Youth’, a claim bestowed on him by one of the biggest strongman publications of the day.

As a young lifter, Inch was, like many of his peers, inspired by Eugen Sandow.

Attending one of the German’s famous shows, Inch sat in the audience and watched Sandow perform one of his trademark acts: ripping a pack of cards in half and throwing the split deck into the audience.

Inch caught one half of the pack, proceeded to nonchalantly split that in half, and, much to the annoyance of Sandow, triumphantly threw it back onto the stage.

After further success on the local strongman circuit, Inch went on to win the title of Britain’s Strongest Man on June 11, 1910.

The Scarborough Hercules continued to lift right and win competitions right up until his death.

At the age of 68, Inch was still capable of deadlifting 540 pounds!

As was customary for many of the country’s foremost strength athletes, Inch went on to become a professor of physical fitness.

In 1903, he launched a mail order muscle course that would eventually become the most popular of its kind in the country.

Two years later, he published Scientific Weightlifting, the first in a long line of books.

It was stratospherically successful and went on to sell over 40,000 copies.

By the 1930s, Inch had become a household name and a leading expert on strength.

At this time, his mail order series employed over 70 members of staff, answering up to 3,000 letters every day!

Inch wrote many books on strength training and bodybuilding, his most well-known publication probably being 1907’s Thomas Inch On Strength, in which he lays out his various theories on physical culture, sounding a lot like Billy Elliot’s dad in the process.

He is a very poor specimen of manhood who has no interest in manly games and sports, old English field athletics, feats of strength, and good physical development.

Aside from the strength advice, it’s essentially a tome for 1950’s Dads.

So if you have hairy knuckles, smoke a pipe, and live in fear of your daughter dating a communist and/or black man – and you like lifting weights – start reading now! 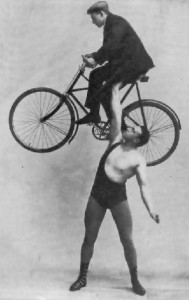 Throughout his life, Thomas Inch toured his one-man strongman show across the country.

The show, which was sponsored by Bovril (only in the North), saw Inch, who would often dress as a Roman Gladiator, perform ludicrous feats of strength, such as bent pressing a man on a bicycle and bicep curling an otter.

Inch offered financial rewards for anyone that could replicate his lifts.

No-one ever managed this feat – apart from the champion boxer Len Harvey, who became the first man ever (apart from Inch) to close the ‘Inch Challenge Grip Machine’.

Displeased with this incident, Inch immediately introduced an even tougher machine into his act to prevent this from ever happening again.

Inch excelled at overhead lifts, and undoubtedly his most iconic lift was the Inch Dumbbell.

Sometimes referred to as the ‘172’, this was a dumbbell that weighed 172 pounds and 9 ounces (see right).

In addition to being obscenely heavy, the Inch Dumbbell was practically impossible to lift because of its ludicrously thick handle, which had a diameter of 2 3/8 inches.

Inch lifted this dumbbell overhead for the first time in June 6, 1908 with apparent ease.

In each subsequent show he would challenge his audience to lift the Inch Dumbbell.

Over the next 50 years, most people, including legendary strongman Arthur Saxon and bodybuilding icon Reg Park, failed to lift this dumbbell off the ground, let alone hoist it overhead.

Since Inch, only a handful of strongmen have ever been able to replicate this seminal lift.

Inch was an all-round sportsman and excelled at a wide range of disciplines, from cycling and boxing to darts and billiards.

Indeed, such was his expertise and renown, that he was called in to coach many of the country’s top boxers in strength and conditioning.

During the Great War, Inch’s expertise in physical culture was further put to good use in rehabilitating wounded soldiers at Fulham Military Hospital. 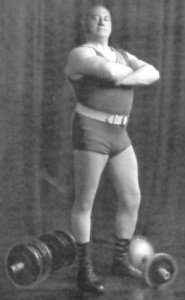 He was, undoubtedly, one of the most influential personalities in the history of weightlifting.

His professional work in the field of physical culture, combined with his popular strongman exploits, helped bodybuilding reach a mainstream audience.

He was also a leading proponent of the health benefits of lifting weights and helped disprove the medical opinion that weightlifting was bad for the heart.

Unfortunately, however, his family failed to share the reverence now bestowed on the Scarborough Hercules, and after his death they brusquely – and tragically – scrapped his collection of bodybuilding memorabilia which he had amassed over his lifetime.

Nonetheless, Inch’s achievements and larger than life personality continue to endure, inspiring countless more athletes to pursue their dreams of muscle and strength.