Supplements From Your Granny's Cupboard | Gym-Talk.com

Supplements From Your Granny’s Cupboard

Summer is coming and every gym rat can feel a change in the air.

People are moving away from their 5 sets of 5 and are turning to supersets and circuits to burn those few extra calories.

‘Reps for Zante’ and ‘No carbs before Marbs’ can be heard shouted across the weight room by tiny lads preparing to go on tour (lads, lads, lads!).

Whatever the plan for the summer, pennies will need to be saved for plane tickets, hipster stringer vests, designer flip flops, and drinks for the plethora of ladies that will no doubt be surrounding you in awe of your chiselled physique.

That’s how you’re envisioning it at least.

So rather than, frankly, burning you money on mostly useless ‘fat burning’ supplements, instead raid your Nan’s pantry (not a euphemism) from some common herbs and spices for free.

Or spend a fiver, tops, in Tesco and pick up some effective and totally natural additions to you diet to help peel off those last pounds of fat before you head off to Kavos. 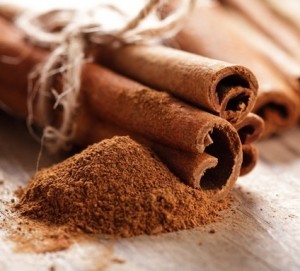 Cinnamon is a must have addition to any diet.

This miraculous spice has been shown to help control blood sugar levels when eaten in conjunction with high carb foods.

So it’s perfect for a re-feed or with a post-workout meal.

Lots of studies are currently underway looking into the mechanisms and the full effects of cinnamon in the human body, but in people with Type 2 Diabetes cinnamon may help with their ability to respond to Insulin and normalise blood sugar levels.

It appears that an active compound in cinnamon helps not only stimulate insulin receptors but also inhibits an enzyme which deactivates them.

But not only can cinnamon help regulate your blood sugar, it has also been shown to reduce blood triglycerides and LDL (bad) cholesterol.

Another round of bacon then please.

Some other benefits of cinnamon include anti blood clotting properties, so, and this is pure speculation, I suppose you could get an even more ridiculous pump with thinner blood coursing through your veins.

Stir half a teaspoon into your morning oats or into some protein pancake mix. 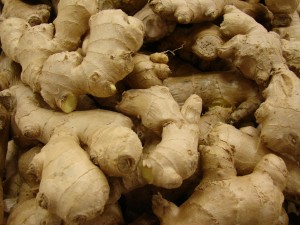 You’ve been in the gym 6 times this week and it’s only Wednesday.

You’re sore, tired, and starting to feel some aches and pains.

Rather than reaching for the Ibuprofen, grab some ginger powder, or, better yet, some grated fresh ginger.

In a study involving people who did and people who didn’t respond to conventional drugs, it was found that 100% of the participants with muscular discomfort experienced relief in pain or swelling when they consumed ginger regularly.

In a double blind study involving people with knee arthritis where one group were supplemented with ginger and another given a placebo, the group given the ginger supplement showed an improvement in both range of motion at the knee and a decrease in pain.

Ginger appears to suppress pro-inflammatory compounds in the body while simultaneously providing protection from free radicals.

What’s more, it has also been shown to have anti-cancer and immune boosting properties as a little bonus.

Rice and salads get boring quickly, so add ginger, soy sauce, and a little olive oil together to make a healing sauce to improve what would be a plain meal. 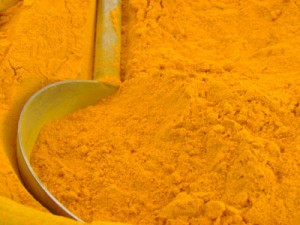 Another spice with potent anti-inflammatory properties which are routine, but turmeric has also been shown to improve liver function.

So for those of you worried about the damaging effects of a high protein diet (worries which are totally unfounded), adding a little of this spice to your diet might help calm your nerves.

The curcumin compound in turmeric is the secret ingredient here.

This magic compound has also been shown to provide protection to the cardiovascular system as well as lowering cholesterol and potentially providing a defence against Alzheimer’s disease.

Tumeric is one of the main spices in curry, so rather than go down to Korma Chameleon, mix it with cumin, coriander, and some tomato puree or canned tomatoes, and cook it all up with some chicken and rice. 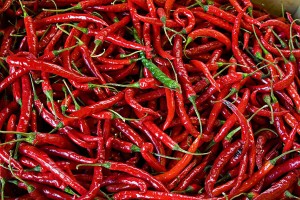 That heat you feel after guzzling down a kebab smothered in chilli sauce from Abra-Kebab-Ra doesn’t come from the chilli.

Your body produces that heat and it requires energy – therefore calories – to produce it.

Any substances containing chilli have been shown to increase thermogenesis and oxygen consumption for more than 20 minutes after consuming them.

The problem is chilli sauces and the like come laden with unwanted sugar.

So instead of using a pre-made sauce, add the cayenne pepper spice right into your meals.

Turn up the heat and feel those pounds melt away.

As a little bonus, if you’re suffering from dreaded man flu (have you had your last rites read yet?) chilli and spicy foods help clear congestion.

Which is something many of you can probably attest to the last time you tucked into a Vindaloo and found your nose running like a tap!

Warning: Gymtalk does not take responsibility for any damaged caused by excessive chili consumption or time wasted on the toilet the morning after.

A word to the wise if you think this might all be hokum:

Read the ingredients list of almost any fat burner on the shelves and I’d stake my next month’s supply of protein that one of more of these spices is included in their mix.

So why fork out £30+ when you can get the same benefit (not to mention probably a better dose) from the Co-op down the road?

If you use – or have tried – any of these spices to great effect, I’d love to hear from you.

Or if you’ve got any delicious suggestions involving these or any other spices you use to increase your gains, let us know in the comments section below!

Until next time, I’m hitting the bar(bell).