Before the advent of modern bodybuilding, with its isolation machines, designer supplements and toxic chemicals, there was a secret weapon which bodybuilders used to grow freakish amounts of muscle in a short space of time.

This was a weapon so holy and so powerful that it was inscribed on two stone tablets on the slopes of Mount Sinai while Moses was still on the boob.

Sadly, however, it is a weapon that is largely ignored in the air conditioned gymnasiums of today.

And, before you go looking, this isn’t something that you can find online or buy from Tattoo Stan in the alley behind UK Best Kebab.

And as far as workout regimes go, they don’t come much more basic, tougher or devastatingly effective than the infamous 20 Rep Squat Routine.

The 20 Rep Squat is one of the most famous old-school bulking routines, and for good reason.

When performed correctly it will help you build unprecedented levels of muscle at an extraordinary rate. 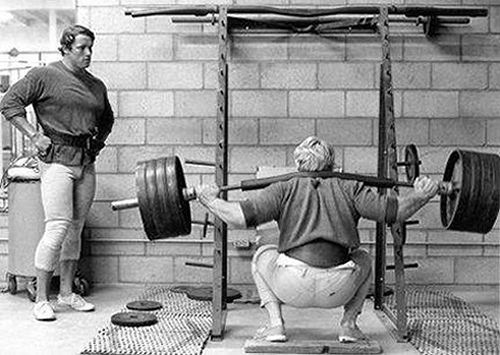 And like many of the most proven and effective muscle building programmes out there, its beauty lies in its simplicity.

The winning formula is essentially:

Indeed, this routine is also known was ‘Squats and Milk’ as, in addition to ballbreaking repetitions of squats, it prescribes a gallon of milk a day (GOMAD).

On this programme you’ll easily be drinking enough milk to put your local dairy farm out of business.

And, mark my words, your quads will become so vast that wearing jeans will no longer be an option.

Those who complete the routine will be referred to in regal tones as the Quadfather, Thighly Cyrus, Calfin Harris, Liam Kneeson, Quadzilla, Arnold Squatsaloadaweightanegga, Leg Dennis (that was awful), or simply that t**t who hogs the squat rack.

(If you have any other leg-related nicknames, please fire them off in the comments below.)

A word of caution, though:

You’ll need some massive mental cojones to persevere as it makes most muscle building protocols look like your mum’s Icelandic Body Sculpting class, i.e. a croc of shit.

The origins of the 20 Rep Squat routine date back to the 1930s when American weightligting coach Mark Berry began to tout the benefits of high repetition squats in Alan Calvert’s Strength magazine.

Using this ‘new’ approach, Berry had been able to encourage muscular growth at monstorous – and previously unheard of – rates in his athletes.

Inspired by Berry’s findings, a young lifter by the name of Joseph Curtis Hise (later nicknamed ‘Daddy of the Squat’) began experimenting with squatting for 20 reps.

Hence the other term for the routine – ‘Breathing Squats’.

After performing 20 reps, Hise suggested that the lifter “should feel like he has just run 2 miles at full speed”.

And thus, the 20 Rep Squat routine was born. 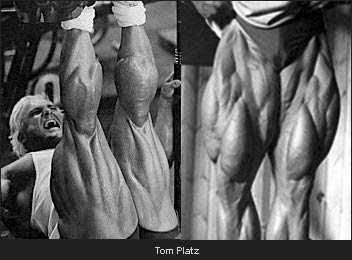 It has since stood the test of time, having been championed by John McCallum in 1968 and in Randall J. Storssen’s popular 1989 book Super Squats.

The latter claimed that 20 Rep Squats could pack on 30lbs of muscle within 6 weeks!

20 Rep Squats was also the routine of choice for muscle legend Tom Platz, who used it to build the ‘best legs in bodybuilding’.

Platz claimed to have squatted 585 pounds for 23 reps!

Your quads are largely made up of Type II A muscle fibres which respond very well to high rep work.

This is the reason why cyclists and speed skaters – even in the endurance disciplines – have such titanic legs.

Just check out the quads on German cyclist Robert Forstemann and you’ll see what I mean!

The cornerstone of every workout in this programme in performing 1 x 20 reps of squats.

Importantly these 20 Breathing Squats must be performed at your 10RM.

Well the key is in the title – Breathing Squats are quite the different beast compared to your typical squat.

As mentioned above, with Breathing Squats, once you hit failure at 10 reps you then take a series of 3-5 deep breaths after every subsequent rep.

This will allow you to mentally and physically recharge for the next rep, enabling your body to recruit higher-threshold motor units than it would if there was no rest between reps.

As such, it’s not uncommon for the set to last 4-5 or even more minutes.

When it comes to the precise routine, there are several variations of the 20 Rep Squat to choose from, depending on your preferences.

Each variation inlcudes 1 set of 20 reps on squat as its mainstay, in addition to a combination of basic push/pull movements.

Thanks for sharing, it’s really appreciated!

The 20 Rep Squat routine should last for 6 weeks and comprise 2/3 sessions per week.

Start off with 3 sessions but if recovery becomes an issue step it down to 2.

This routine should be used sparingly as it is extremely challenging.

As a rule of thumb, you shouldn’t return to it for at least 6 weeks after you have completed the first cycle.

Personally, however, I would leave it much longer than that.

The primary goal is to add 5lbs (roughly 2.5kg) to the barbell every session.

Most people are able perform 20 reps of their current 5RM by week 6.

So, to calculate your starting weight, work backwards and subtract 2.5kg from your 5RM for every session.

If you are working out 3 times per week that is 18 sessions in a 6 week cycle.

So if your current 5RM on squat is 130kg you would commence proceedings with a weight of 85kg and add 2.5kg to the bar every session.

Before each set of Breathing Squats make sure you perform a few sets of 10 reps with a much lighter weight as a warm up.

I also include at least 15 minutes of stretching and mobility work before I even square up to the squat rack.

Breathing correctly while performing your squats will help you bust out those last 10 reps.

You’ll more than likely get through the first 10 reps without much fuss, however the next 10 will be a different story.

Slow down and take deep gulps when you hit the peak contraction of the movement.

Because you will no doubt be in a horrible place between reps 10 and 20, there is a big chance of failure.

Its is therefore essential to squat with safety pins or a spotter. 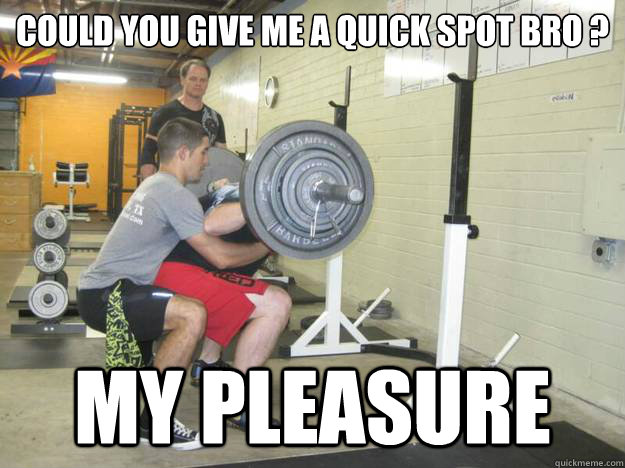 Once you’ve finished your squats, crawl over to a bench, grab a dumbbell, and bust out 20 pull overs on a light weight.

Old school lifters such as Arnie performed dumbbell pull overs as they believed it expanded their ribcage and added size to their chest (although there is no empirical evidence for this).

This movement also functions as a gentle cool down after your grueling trip to Squat City.

For the rest of the exercises, use a weight which you can successfully complete 20 reps with.

These should be nowhere near as taxing as your 20 reps on squats.

If you’re up to it, include stretching and light cardio on your rest days to ease the DOMS, which is going to pretty severe.

Drinking a gallon of milk a day (that’s roughly 8 pints) is another staple of the 20 Rep Squat Routine.

If you want to feel like an old school lifter, which is part of the fun of the routine, keep to the milk.

Just be careful not to drink just before your workout, as you will throw up.

If 8 pints of milk a day seems a little excessive, by all means factor in other protein sources and supplements, provided you are still getting enough calories in.

The 20 Rep Squat Routine is an insanely difficult routine and as such I would only recommend it for intermediate to advanced lifters.

Beginners will more than likely suffer from injuries due to their form breaking down, plus they’ll lack the high intensity which will yield the best return on investment.

As well as crucifying you physically, it also takes an intense mental toll.

In fact I would say 20 Rep Squats is more challenging mentally than it is physically.

As the old adage goes, the mind will always quit before the body.

And you’ll need to dig into some serious mental reserves once you go past the first 10 reps of your 10RM and every muscle in your body is SCREAMING “Go f**k yourself, I’ve already maxed out!”

Plus, once you are done with the 20 reps on squat, it’s very hard to summon the motivation for the other exercises.

The sight of another barbell will make you feel like you’ve just been used as a cock holster by Ronnie Coleman.

However, having said all this, 20 Rep Squats is well worth breaking the pain barrier for.

This is a routine that I have performed on and off for the last few years and the gains have always been ridiculous.

In terms of productivity it blows every other leg workout out of the water, delivering results which are far superior to the standard bodybuilding splits you’ll find in most muscle magazines.

However, because it is so tough, it’s very easy to burn out, so I would recommend the 20 Rep Squat routine as an occasional ‘shock to the system’.

Use it to supercharge your workout every now and again – I wouldn’t build everything around squats and milk.

And a word about the milk: the first time I did this routine I followed the GOMAD schedule religiously.

And I put on a MASSIVE amount of weight – a lot of it fat – and was constantly bloated.

After all, I was drinking 56 pints of full fat milk a week.

I’m pretty sure that lots of families in my neighbourhood had to go without tea, coffee and cereal while I was on this programme.

I will also say that unlike what some others on the Internet have noted, this is primarily a hypertrophy – and not a strength – workout.

While your 1RM might naturally increase (mine didn’t), 20 Rep Squats mainly targets endurance, work capacity and, of course, physical mass.

As such, I’d recommend following up 20 Rep Squats with a good old fashioned 5×5 routine to keep your body wondering what the f**k is going on.

20 Rep Squats is an unforgiving routine that will push you to the edge both physically and mentally.

However, if you can get through it in one piece, muscle gains will be behemothic.

Ultimately, I would say that two of the most important factors in this programme are diet and attitude.

Turbocharge your calorie intake and approach every workout like a Rocky montage and you’ll be well on your way to Gainsville.

All in all, a simple, painful and incredibly effective way of getting BIG. 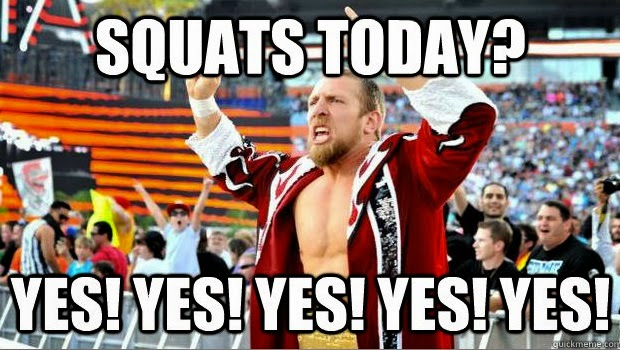 Who fancies giving the 20 Rep Squat routine a go?

Have any of you guys already tried it?

I’m excited to hear your thoughts and questions.