Over the years, strength training and trying to beat my numbers had induced a certain mindset:

I took to this concept like a dog eating beetroot, justifying all those cherry bakewells with the fact that I was in a “calorific surplus” and would build muscle regardless of the crap I was shoving down my throat.

After all, I was getting strong, who cared how I looked?

Well, the harsh fact was that I actually cared.

I cared about the fact that I looked fat as opposed to strong.

I cared about the fact that my belly was hanging over my denims like a fruitbat on a Sunday.

The fact that I was approaching my mid-thirties also increased the sense of impending doom.

However this also proved to be the catalyst for change, as there was no way I was going to live through my thirties without some “hot abs”, so it was time to get moving.

I knew I had to get a sound nutrition plan.

I had tried so many diets and found it difficult to stick to any of them for a considerable length of time.

It became clear to me throughout this period that the real issue was trying to adapt to such a lifestyle change.

Diets are doomed to fail for most as you are expected to completely overhaul a considerable part of your lifestyle.

If I was to truly succeed, I would have to follow a plan that didn’t impose too much change to my eating habits.

That’s when I came across Brad Pilon’s Eat Stop Eat.

Eat Stop Eat isn’t a diet, it’s more of a lifestyle which is based around the concept of intermittent fasting.

Fasting involves abstaining from food for any given time.

The given time for me would be 24 hours, twice a week.

During this ‘fasted state’, insulin levels lower and the body finds it much easier to burn fat.

The only things consumed during this time would be black coffee, green tea or water.

My fasting day would be flexible.

I could fast whenever, however I tended to leave at least two days between fasting days.

I would usually begin a fast at 4-5pm and resume eating at the same time, the following day.

The actual content of my overall diet was relatively clean.

I mainly ate the same things, day in and day out, to maintain consistency and be able to identify what was working for me.

I mostly steered clear of starchy carbs however I would consume them now and again around my training sessions.

The carbs that I mostly consumed were:

I also realised that there would always be room for potential slip-ups regarding my diet.

This is only natural and would ensure that I didn’t work myself into a mild depression by becoming a nutrition Nazi. 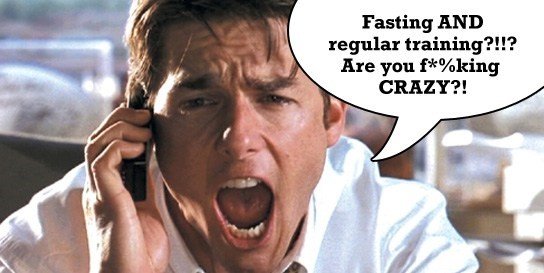 My training prior to this experiment had consisted mostly of strength training – compound exercises (squats, deadlifts, etc) built around low reps and heavy weight.

I kept to these principles to ensure retention of muscle however I knew would have to change my overall training style in order to achieve my goal.

This was to be accomplished by performing full-body workouts, three times a week.

For example, a typical workout would go like this:

I would always time my recovery and never wait more than 60 seconds between sets.

This kept things at a good pace and ensured I was blowing out of every hole in my body.

I would also end all my sessions with a ‘finisher’.

A finisher is usually a high intensity exercise designed to increase work capacity and get the body burning more calories AFTER exercise has finished.

The finishers would usually last 10-15 minutes and consist of:

On my rest days, I would go for a two and a half mile walk with an 18kg weighted vest on.

This was only performed on two to three times at most.

This was kept very very simple.

Foam rolling was performed on rest days and I mostly ensured that I got eight hours of sleep every night.

I also abstained from alcohol for most of the duration of the eight weeks.

On day one of the fast I weighed in at 79kg

By day fifty-six I was standing at 70kg.

Over the course of eight weeks I had managed to drop 9kg.

I can’t tell how much of this was muscle however I expect it wasn’t too much as I managed to mostly retain strength throughout the experiment.

The first thought that springs to mind was how fasting allowed me to fully acknowledge my relationship with hunger.

Hunger is something that most fear and for good reason.

Most people reading this will have ate food EVERY DAY of their lives.

The concept of going 24 hours without food is alien to most, to the point where they look at you like you have sprouted an extra head if you even dare suggest such a thing.

The reality, for me, is that hunger comes in waves, usually lasting for no more than 10-15 minutes.

The idea that you have to eat every two to three hours in order to retain muscle and lose weight also turned out to be complete nonsense.

I feel this idea has been perpetuated by supplement and food companies who rely on you buying into this way of thinking.

People are now literally trying to eat themselves thin when the reality is that eating LESS is actually the way forward.

I actually feel stupid writing that point as it’s so simple and reeking of common sense.

Overall, I understand that there are thousands of ways to lose body fat, however I feel that intermittent fasting is very easy to implement into your everyday life as it doesn’t take much guesswork to get started.

It’s not about changing what you eat but when you eat.

You don’t have to count calories and you are granted a little room to manoeuvre within, with regards to having guilty pleasures.

This alone ensures that fasting is a great way to kickstart the weight loss process.

If you’ve ever tried intermittent fasting I’d love to hear from you.

How effective was it?

How did you find the experience of going without food?

Let me know in the comments below! 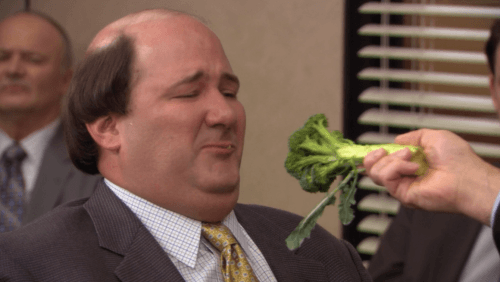 Reviewing The NHS Diet – The Nutritional Equivalent Of A Wet Fart