In terms of effectiveness, Nitro-Tech Hardcore is one of the best supplements I've ever used, but the hefty price tag means it's only really for those who are serious about bodybuilding.

After looking at GymTalk’s Google Analytics account, particularly the ‘Geo-Displacement’ section, it became abundantly clear that we need to branch out a bit into supplements that are sold outside the UK.

Indeed, aside from our home-based readership, our top five countries are USA, Canada, Germany, Malaysia and Indonesia (oddly enough).

I don’t think it’s ignorant to say I’m unaware of what the bestselling proteins are in Indo China.

I could make some quasi-racist sounding suggestions of what they are, believe me I could, but I won’t… seriously.

A quick look at Flex Magazine tells me what some of the top bodybuilding personalities in the world are using/endorsing stateside.

For this supplement review I have selected Muscletech’s Nitro-Tech Hardcore, which sounds like a mixture between a Class A narcotic and Vin Diesel’s car.

Muscletech is a lot like MaxiNutrition in the UK – a longstanding brand that’s built up a loyal following over the years and has some pretty impressive athletes willing to attach their name and professional credibility to it. 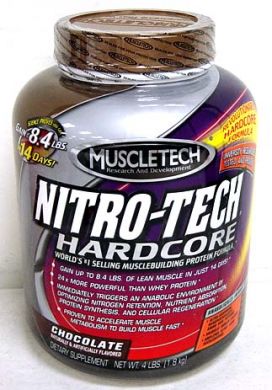 No pissing about there.

Muscletech’s supplements are certainly marketed towards the more serious bodybuilders amongst us.

If you just turn up, curl, pout, curl, and then Instagram your pathetic workout, then you should probably leave this page.

If not, you’re in for a treat my friend.

On the face of it, Nitro-Tech Hardcore doesn’t really elicit much of a hint of what it will do and frankly the product livery looks like a sketch John Lennon, if he were still alive, would put forward for his latest video, ie fucking mental.

It’s probably best I leave the description to Muscletech themselves as this is proper PhD level supplementation (or hokum):

Basically everything you could ever need to aid lean mass and strength!

This product mixes like a dream, even just with a conventional shaker, so no faults there.

Flavour is a different matter.

There are quite a few negative reviews about the product’s flavour and with such a high volume, it’s hard to ignore.

I had vanilla and I’d personally give it around 6/10.

Now I’m not usually an advocate of wanting my shake to taste like something Michel Roux Jr has put together but I don’t really want to gag like a cheap whore while drinking it either.

Then again, this product is all about effectiveness.

It’s like saying I want to win Mr Olympia, but I only want to bench 60kg.

You need to make the odd sacrifice, which I’ll move on to now.

Following the recommended daily dosage of 1-2 scoops 2-3 times a day I got allllll kiiiiiiinds of gains.

I’ve struggled for a while to pack on arm mass, but after six weeks of using this product and following Charlie’s fantastic arm programme, I’ve added just over an inch to each cannon.

This has also had a highly positive effect on my compound lifts, particularly bench, overhead press and bent over row.

Like I said, Nitro-Tech Hardcore is aimed at the pros and frankly you probably need sponsorship to be able to regularly afford this product.

At around £65 for just under 2kg you need to be serious about your training to stick with Nitro-Tech Hardcore.

In terms of effectiveness, this product is probably the best I’ve ever used.

As I’m not really in bodybuilding to compete however, I won’t be continuing to use it.

But for those amongst us who are really putting in 100%, then I can’t recommend this product enough.

It mixes incredibly well, looks great, tastes OK, but most importantly you will build lean muscle and strength.

After all, isn’t that what bodybuilding’s all about?

You can usually get the best deal on Muscletech protein by shopping here at Amazon.

If anyone else has tried some of the Muscletech supplements then we’d love to hear from you. Let us know your thoughts in the comments section below.

Until next time, lift smart and lift strong.