During another seemingly pointless and soul destroying hour long YouTube video binge, I had the serendipity to click on a link teasingly entitled “The Strongest Man You’ve Never Heard Of”.

While expecting to find yet another misleading title – and yet another video of pixelated tits and arse – what followed changed my outlook on bodybuilding forever.

Disclaimer: if you find vulgar language offensive, you’d better fuck the fuck off before reading any further…

While sharing surnames, the similarities between C T Fletcher and me, Julian Fletcher, end there.

He’s a 54-year-old man living in the Mecca of bodybuilding: Long Beach, California.

I’m straight outta the bustling metropolis of Totternhoe, England, which isn’t known for anything (apart from some shitty quarry).

C T Fletcher burst onto the scene in February 2013 with his YouTube videos going viral, instantly.

His background – combined with a refreshing no-nonsense attitude, likeable personality and penchant for profanity – have helped this bodybuilding personality secure small-scale fame in a short amount of time.

Learning about all C T Fletcher’s accomplishments – ‘drug-free’ (to be discussed later) – I wondered why I hadn’t heard about him before.

After all his resumé includes: 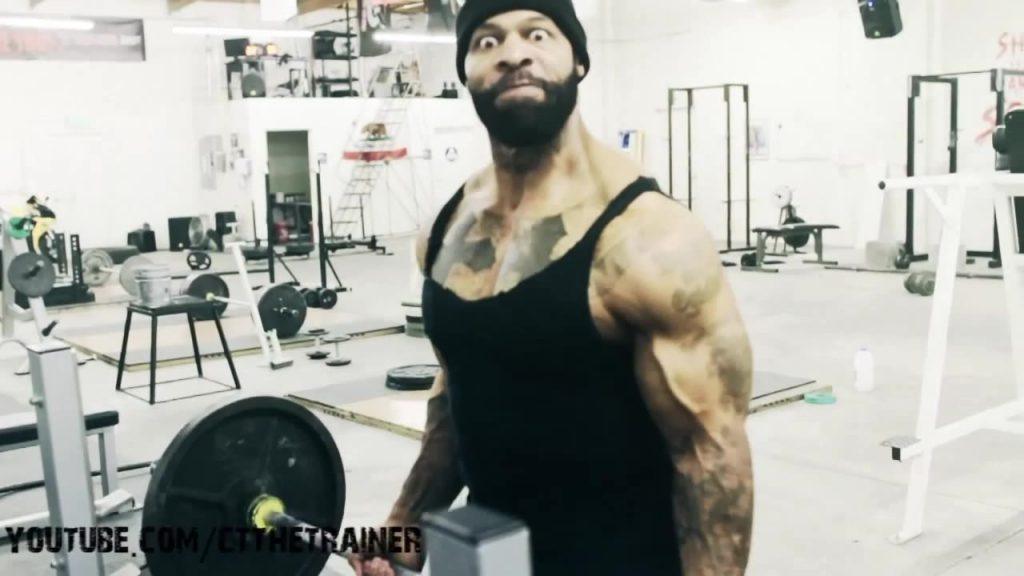 NB: Strict curl dictates that your head, back and arse must be in contact with a wall at all times during the movement – Fletcher claims to lift over 300lbs without the wall!

Making of the man

Fletcher grew up in a house in Compton where religion ruled supreme.

His super strict Pentecostal preacher father would routinely “beat the fuck” out of him in his spare time.

One thing he did gain through his strict upbringing, however, was a mental toughness and focus that enabled him to excel in bodybuilding.

He was also instilled with the arrogance of a love child between Kanye West and David Haye.

Surprisingly, though, it seemed no-one wanted to smash his head off.

This may be because he’s fucking HUGE.

As an illustration of this boisterous arrogance, at a world championship competition, C T Fletcher announced to the entire crowd of Super Heavyweights:

Later he explained: “This was my attitude in 1992 when I thought I was the best on the planet.”

You may well question Dr Dre’s credentials as a medical practitioner, but you’d never question CT Fletcher as a strict curler.

He’d beat the fuck out of you, for one.

The C T Fletcher Diet – a recipe for disaster

What I find most unbelievable about C T Fletcher was his diet.

Now, you would think that a world champion would have a meticulously detailed and strict diet, but this is FAR from the truth.

Fletcher would eat anything and everything in order to be the “biggest, baddest motherfucker on planet earth.”

He goes on, “I wanted to stop traffic, I wanted to crack the sidewalk with every step”.

His lunch consisted of the same meal every day for 20 years:

But as a six time world champ, did it matter?

The answer, as we are about to find out, is yes, a hundred times yes…

All those McCloggin burgers led to emergency open heart surgery.

Yet, despite technically dying on the operating table three times and requiring 24 hour care, C T Fletcher refuses to give up bodybuilding.

Whether or not C T Fletcher is ‘drug-free’ is another question altogether.

Having spent hours speaking to industry professionals about this, I’ve come to the conclusion that at some point, clearly, he must have taken steroids.

I mean, just look at him.

Yet he still protests his innocence, citing the sheer quantity of cheeseburgers (vrrrrrp) as his substitute for steroids:

“I would eat those cheeseburgers, because I thought I needed it in order to keep up my size. Instead of taking steroids I would eat. I would over-eat and eat anything.”

One of the main aims of C T Fletcher’s videos is to motivate/bully ordinary people to get off their arses and lift weights instead of watching TV.

His mantra of ‘do what you can’ emphasises discipline.

He doesn’t care if you have one arm with no hand, you can still strap a weight to your stump and move it up and down.

Juiced or not, it’s hard to get away from how charismatic he is about his sport, so I’ll leave you with a final taste of C T Fletcher.

“I hate complainers, I hate criers. If I can come in here with a metal valve implanted in my chest, taking 10 different medicines just to stay alive every day to do my work out, you have no excuses. So no matter what – your nose bleeds, it’s that time of the month, the kids are crying, you don’t feel like it, your back hurts, you’ve got aches and pains, it’s STILL your motherfucking set!”

But be warned, his persistent use of caps lock is certainly more irritating than motivational.

I suspect he probably he hit the caps lock button so hard the first time that it fucked his keyboard up permanently.

An inspirational figure that deserves our respect?

Or a complete fucking toss monkey?

Join the conversation in the comments section below!

Julian is a man with no athletic ability or any interest in the gym. We're basically letting him have a go at this out of sympathy.