Louis Cyr: The Canadian Colossus | Strongest Man Of All Time 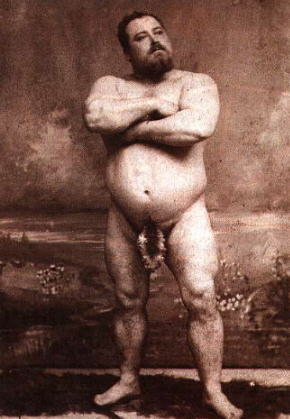 Much like “What’s the best Beatles album?”, “Is Tom Cruise an alien?” and “At what point in the Harry Potter film series it acceptable to mentally undress Hermione Granger?”, the question “Who is the strongest man of all time?” is an oft-debated topic.

One man that deserves his name thrown into the ring is Louis Cyr, a French-Canadian brick shithouse who earned worldwide renown at the turn of the twentieth century by performing legendary/completely absurd feats of strength.

Cyr (pronounced “seer”) was a modern day Samson figure, an agricultural folk hero whose breathtaking exploits have been passed on by word-of-mouth to successive generations.

Among his most extraordinary achievements were raising 4,337 pounds on his back, lifting 500 pounds with just one finger, and deadlifting a horse (?).

In the words of Harry Houdini, it is “generally conceded that Louis Cyr was, in his best days, the strongest man in the known-world for straight weightlifting.”

Similarly, other authorities on strength, such as Ben Weider (brother of Joe Weider and former chairman of the IFBB), George F. Jowett, and Thomas Inch all believed Cyr to be the strongest man to have ever lived.

This is in the context of recorded history, of course, as it’s a safe bet that some demi-celestial nutter from Ancient Greece would have made Cyr look like a malnourished glamour model.

With his rotund frame, 60 inch chest, biceps measuring 55cm in circumference, and legs as girthy as prehistoric tree trunks, the “King of the Circus” cut a swathe through the strongman world, leaving world records, dinner tables and beer barrels reeling in his wake.

Cyr’s memorably mammoth physique, combined with his ludicrous feats of agricultural strength (most of which would probably be illegal under today’s animals welfare laws), have earned him a permanent place in the history books.

This is the story of Louis Cyr, the “Canadian Colossus”. 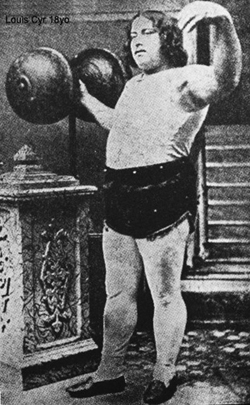 While his father was of average build, it was his mother who possessed the strength genetics.

She was, to put it mildly, pretty bloody gargantuan, weighing in at 265 pounds and standing well over 6 feet tall.

A physique that would rip a man to pieces.

Cyr, who was the second of 17 children, weighed 18 pounds at birth and was naturally gifted with strength as a child.

At nine years old he began carrying 100 pound carves under his arm on his family’s farm.

At 12 years old Cyr left school to work in lumber camps in the winter months and on his family’s farm for the rest of the year.

This is where his real strength really began to develop, and his co-workers and friends quickly became impressed by his precocious lifting capabilities.

One of his earliest admirers was his mother, who encouraged him to grow his hair long in order to emulate the Biblical character of Samson.

On his father’s farm Louis would literally work out using the farmyard animals as makeshift barbells and dumbbells.

When a bull calf was born, for example, he immediately started carrying it around, and then, echoing Milo of Croton, went on to lift the calf every day, getting stronger as the calf got heavier.

A year later, when he was 15, Cyr, who now weighed 230 pounds, lifted to safety a local farmer’s overloaded horse and cart which had gotten stuck in the mud.

This impressive accomplishment spread like wildfire through the local villages, and his co-workers, friends and family urged him to compete in the strongman circuit.

So, adopting the name of Louis Cyr (as it was easier to pronounce in English), this baby-faced, curly-haired Canadian, now aged 18, entered his first proper competition in 1881 in Boston.

He won the contest – and the instant respect of his peers – by deadlifting a male horse which reputedly weighed 3/4 short tons (0.68t).

Despite his early success, Cyr was unable to earn a living through strength contests alone, so he was forced to pursue other avenues of employment.

After marrying a local girl by the name of Melina Courtois (by all accounts an absolute hottie), Cyr put his strength to good use by getting work as a lumberjack.

Then, after breaking up a knife fight between two local ruffians (allegedly Cyr ended up subduing both combatants and carrying them to the police station, one under each arm), he was invited to work as a policeman.

Cyr later left the police force in order to run a local tavern come gymnasium, which would later become the site of many strongman challenges, through all of which Cyr would remain unbeaten.

Touring with the circus

As Cyr’s legendary exploits gained renown across Canada and the United States, he started performing in circus strongman shows, and many thousands of people flocked to see him on his first ever tour.

Louis Cyr’s circus shows soon became legendary and his name was plastered over newspaper headlines up and down the country. 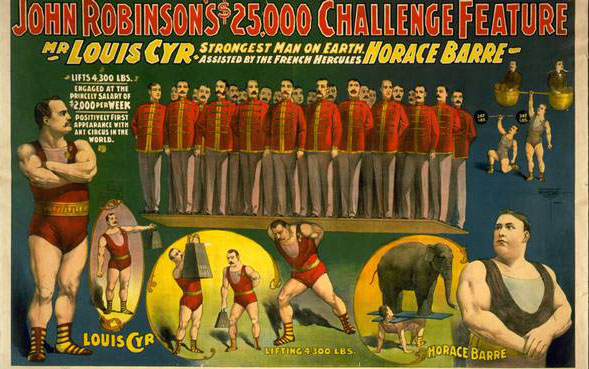 In 1886 he earned the title of the “Strongest Man in Canada” after being pitted against Michaud of Quebec, then Canada’s strongest man.

In front of a crowd of over 4,000 people, Cyr defeated Michaud by lifting a granite stone weighing 517 pounds to his shoulders.

Shortly after Cyr travelled Europe to compete in strongman competitions, defeating everyone who dared challenge him.

During these shows, Cyr racked up a series of stunning achievements.

He lifted 500 pounds using just one finger; pulled carts containing 15-20 men; lifted 200 pound barrels of flour to his shoulders; pushed a freight car up a hill; and on one occasion (Boston 1895) raised 4,337 pounds of weight on his back.

This last show of strength is an achievement that no-one has ever come close to replicating.

Cyr’s most distinguished feat, however, was to stand fast while resisting the pull of four draught horses.

He would hold the reigns to two horses in each hand while their grooms cracked whips to encourage the horses to move him – to no avail. 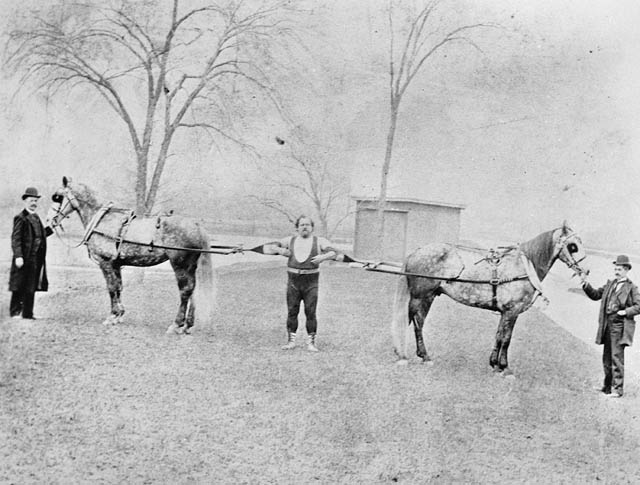 At the age of 28, Cyr lifted aloft 278 pounds with his right hand, beating the world record of 274 pounds set by Eugen Sandow.

At one point there was talk of a contest between Cyr and Eugen Sandow, but unfortunately this never came to pass as a common set of rules between the two could not be agreed upon.

It is the general consensus, however, the Cyr would have wiped the floor with Sandow, and Sandow, ever the astute businessman, and keen to keep his reputation as the world’s strongest man alive, was too shrewd to let this contest happen.

Another anecdote from this time concerns his meeting with the Queen of England at Buckingham Palace.

Louis wanted to impress her with his strength, so he dug his heels into her red carpet (not a euphemism) and split it with apparent ease.

There’s no account of the Queen’s reaction to this act, although if I were her I’d probably be pretty pissed off at having some fat Canadian ruin my royal finery.

ButI guess if there’s one person you don’t mess with, it’s the strongest man on Earth.

With those credentials you can literally do whatever the fuck you want.

Like other strongmen of his time, such as Arthur Saxon, Cyr’s diet was monumental.

He was reported to consume six pounds of meat every dinner, and on one occasion Cyr and his strongman pal Horace Barré each devoured a suckling pig in one sitting.

However, it was this behemothic diet that contributed to his downfall.

In 1904, having reached a titanic 400 pounds in weight, his health began to seriously deteriorate.

In fact Cyr’s condition became so bad that for the last years of his life he was consigned to a Morris chair, like some kind of vast disabled slug, only able to digest yoghurt. 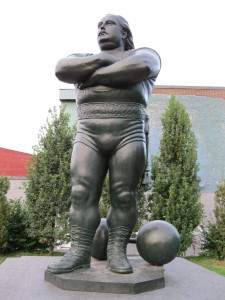 Louis Cyr died on November 10, 1912 of Bright’s Diseases (Chronic Nephritis) at his farm in Saint-Jean-de-Matha.

In a fitting testament to his incredible achievements, Cyr’s funeral, which was held at St Peter’s church in Montreal, was attended by thousands of his admirers.

Since his death, Louis Cyr’s legacy continues to endure.

In 2001 he was inducted into the Panthéon des Sports du Québec (Quebec’s Sporting Hall of Fame) and there is also a museum in his home town of Saint-Jean-de-Matha dedicated to his life and times.

In addition, there is a district of Montreal named Louis-Cyr in his honour (located in Saint-Henri, the same area he patrolled as a policeman) and an impressively endowed statue which proudly stands at the Musée de la Civilisation in Quebec.

There is also an upcoming biopic about the man himself coming to cinemas in 2014 (see the trailer below) which looks well worth a watch.

All in all, Louis Cyr, the “Barrel from Quebec”, was a unique figure in the weightlifting world.

Quiet and gentle, charismatic and witty, unorthodox, big of heart, and, of course, sensationally strong.

He was unbeaten in his lifetime, and, unlike a few of his contemporaries, never once backed down from a challenge.

His feats of strength influenced legions of other strongmen who, down the years, would often try to emulate – but never better – the French-Canadian’s staggering achievements.