A pre-workout supplement that falls down in every category except the one that doesn’t really matter, presentation. I’d recommend you steer clear of Grenade 50 Calibre and opt for something with better flavour and more power.

Looking at some of our recent reviews, you could be forgiven for thinking that we’re on the payroll of The Protein Works and Go Nutrition.

Well I don’t have the security clearance to access that information.

We had to beef up security after we found out the NSA were not only spying on Angela Merkel but they were breaking into Gymtalk Towers in an attempt to learn our muscle building secrets.

Presumably to use on their super soldier program.

Anyway, where was I?

Right, corporate money can’t buy everything, and it certainly can’t buy stars for our review system, as shown by the pre-workout supplement Grenade 50 Calibre.

Let me take you on a journey through hell… 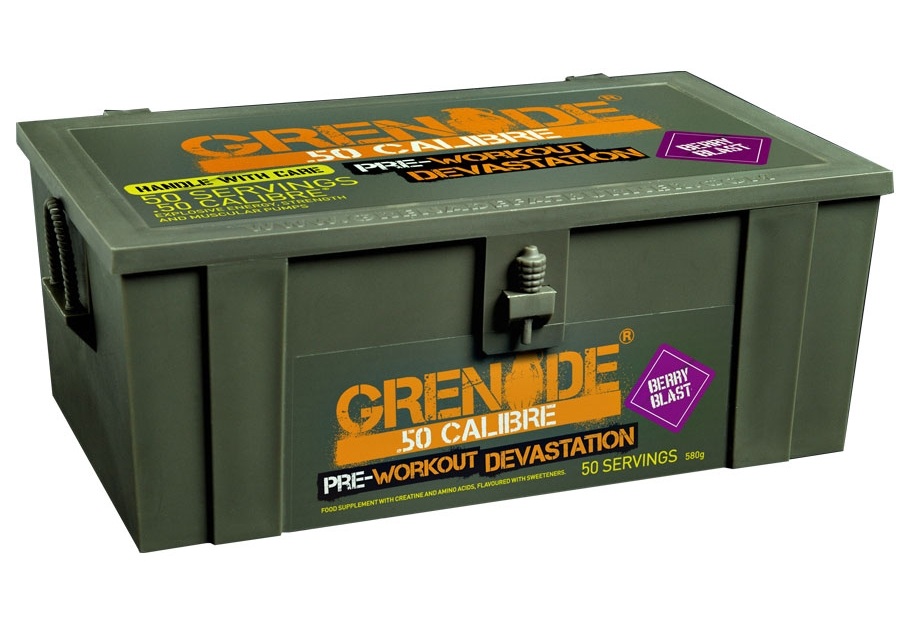 Certainly as a brand they have a very impressive image.

Even from the name you suspect you might be getting a product with a lot of bang for your buck.

They certainly play up to it very well it has to be said.

Their fat burner comes in a grenade shaped pack and this pre-workout comes in an ammo crate style box.

Very cool, however the fact that it makes you feel like an army man is probably the best thing about this product.

I opted for the ‘Berry Blast’ of Grenade 50 Calibre as I figured this would somehow add a little extra to a supposedly powerful pre-workout.

It tasted very similar to the bottles of £2.99 red wine I used to drink back in my student days.

Every sip burned the back of my throat like battery acid.

However, while it was burning my tonsils off it also managed to taste sweeter than a builder’s cup of tea.

I couldn’t finish a full serving of Grenade 50 Calibre for fear of burning through my stomach lining in the middle of a set of squats.

There was a lot of it, in the worst way possible. 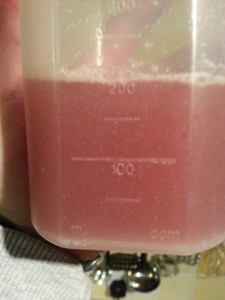 This was taken after 15 minutes of vigorous shaking and in an effort to see the silver lining.

At least my right arm got a fairly decent workout!

This graininess couldn’t be missed either.

It wasn’t like a bit of powder that wouldn’t dissolve, it felt as if pebbles had been slipped into the mix and at one point I actually had to chew some of these down in an effort to dissolve them even more.

Again, Grenade 50 Calibre failed to cash the cheque its packaging was writing.

I’ll start with how it made me feel.

Rather than getting a boost in energy levels and the classic beta alanine tingles I felt light headed to the point of feeling a little sick and began sweating heavily.

Looking at the ingredients list there is no logical reasoning for these side effects but this is what happened.

I needed the boost after a long day at work and with a high volume leg session fast approaching the last thing I needed was to lose my sense of balance when heavy squats were the order of the day.

In one of my previous articles, I went into under-dosing in the supplement industry and this product is guilty of this on multiple fronts.

Per serving only 1.5g of creatine monohydrate is on offer.

5g pre and post is the standard recommendation going around at the moment.

Now it could be argued that this allows people to take their own creatine however I’d argue that if you’re offering a pre-workout product it should offer everything you require pre-workout.

Again, 1.5g is on offer here and while this is within an effective dosing range, doses of around 3g have been shown to be more effective.

Now, while some people say that 6g of beta alanine should be consumed per day split into 1.5g doses this seems to have no greater benefit compared to 4g pre-workout.

The worst offence Grenade 50 Calibre commits, in my opinion, is the BCAA content provided.

10 grams pre workout is the standard but here 0.4 grams are contained per serving.

The same agreement for the creatine dosage could be offered up but I don’t think that really helps.

When they claim that “BCAAs are added for anti-catabolic support” they are really pushing their luck with anyone who can read and use Google.

The box of 580g, which equates to 50 servings, comes in at about £38 depending on how well you shop around (Amazon is usually the cheapest option).

This works out to about 75 English pennies.

On the face of it, this is pretty good value, but when you compare it to Jack3D Micro or MusclePharm Assault it isn’t all that good, as both of those products come in at about 65p a serving.

A bit like buying Neurofen when Tesco own brand ibuprofen does the same thing for less.

I feel like you’re just paying for the cool box this product comes in.

This, then, is a product that falls down in every category except the one that doesn’t really matter, presentation.

On this writer’s recommendation I’d recommend you steer clear of this product and opt for something with better flavour and more power.

It’s a classic case of reading the label with this one I’m afraid.

Bit of a downer this one readers.

Hopefully next time we’ll have another five star review for you all full of hyperbole and knob gags as usual.

Until next time, go lift some iron or something. 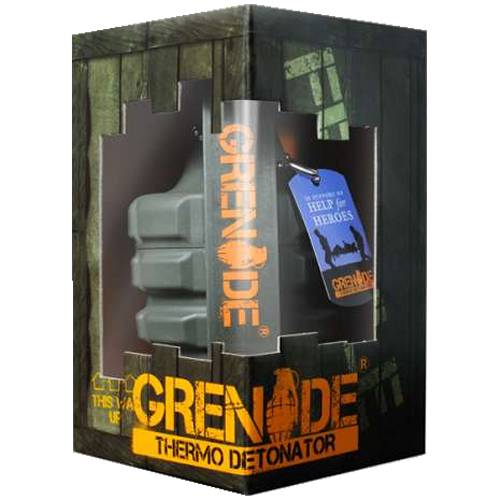