Even with the revamp, Jack3D Micro is still up there with the big hitters as far as pre-workout supplements go. While not the behemoth it used to be, it can still be the difference between going in for that last set of heavy squats or going to check out that babe on the cross-trainer.

As some of you may or may not know, the pre-workout supplement Jack3D got banned recently because somebody thought it would help them run a marathon faster.

Why they thought a product designed to increase your anaerobic energy systems would help them in a long distance event I will never know, but the media jumped all over the product quicker than the Pope on a bouncy castle.

Specifically, the old Jack3D formula was banned because it contained DMAA.

While this has only ever been linked to other deaths anecdotally, the whole product, as well as other products containing DMAA, were recalled.

For anyone who hasn’t tried the old formula Jack3D, it was the best pre-workout product out there.

Some say it made you feel like you’d drank from the wrong Holy Grail in Indiana Jones and the Last Crusade, crumbling under its power.

Some say they gained the same strength that mothers gain to lift cars off their baby.

Either way, you would arrive at the gym with an inability to sit still and a will to push more iron than ever before.

Even at 5pm on a Friday after a long week this would get you in the zone with just one scoop.

So now USPLabs have re-engineered Jack3D into a brand new version called Jack3D Micro, and while it doesn’t make you see the devil, it’s still pretty decent.

The big difference people will notice is that it no longer contains Beta-Alanine, so you won’t get those tingles anymore.

However, the Beta-Alanine is what helps keep the pH in your muscles balanced so you can press on through those last reps without burning out.

It also regulates level of muscle Carnosine, which also helps with muscle pH and is strongly linked to Type II muscle fibre percentage.

The other big difference is that they have removed Creatine from the new formula.

I personally much prefer this, as I like to take Creatine separately from other supplements so I can monitor it independently.

They have also kept the Citrulline and Arginine Nitrate for your nitrogen balance and it still packs a strong black coffee’s worth of caffeine. 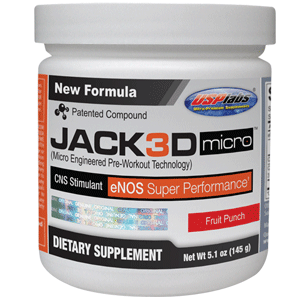 Put one scoop of Jack3D Micro into 200ml of water and it mixes up no problem.

The Lemon & Lime flavour is particularly good – it ends up tasting something like a mix of Lucozade and Powerade.

Also the 200ml goes down extremely easily, so Jack3D Micro doesn’t leave you bloated before a big workout.

The 146g tub lasts for about 30 workouts, so you can get over a month of increased intensity out of it.

As well as Jack3D Micro, I was taking 10g of Creatine and 20g of L-Glutamine before my workouts.

The main thing I noticed was a huge increase in focus.

Instead of swanning about checking my rear delts in the mirror while deciding what to do, I went from set to set with Coleman-esque intensity and pumped out an extra 1-2 reps on each exercise compared to previous weeks.

Don’t expect miracles with Jack3D Micro, but if you are exhausted after a long day at the office this will help you out in a big way.

Also, there is less of a ‘pump’ with this pre-workout than with some of the others, but some people may actually prefer that.

When it comes to Jack3D Micro side effects, nothing really stands out.

However, once, I foolishly decided to take it at 8pm for a quick evening workout and I stayed up into the early hours just staring at the ceiling.

But that’s just the caffeine.

You should be able to pick Jack3D Micro up for under £40 online – which makes each serving under £1.

That makes it pretty good value for me.

Even with the revamp, Jack3D Micro is still up there with the big hitters as far as pre-workout supplements go.

While it’s not the behemoth it used to be, it can still be the difference between going in for that last set of heavy squats or going to check out that babe on the cross-trainer.

I recommend Jack3D for anyone who wants to get a little extra out of their workouts or needs a pick-me-up after work.

Note: For this Jack3D Micro review, I was not just comparing the product to the old formula Jack3D, but to a plethora of other pre-workout supplements which I’ve tried over the years.

For a great price on Jack 3D Micro, head over to this page on Amazon where you can usually get a 146g tub for well under the recommended retail price.

Until then folks, lift smart and lift strong!

Have you tried the old or new Jack3D formulas?

How did you get on?

Let me know your thoughts in the comments section below!