As an early 20s male, my single gym quest in life was the zenith of bigger arms.

I (and I assume most others my age) set out on an insatiable crusade to get a slightly bigger bicep peak enabling me to down pints while balancing the glass between my mouth and fore/upper arm.

Yes, far from me to actually do some fucking research about how to build an all-round, jacked physique, it was arms, nothing but arms, that would lead to all the rewards that a slightly better physique than the next bloke in Moon Under Water commands.

With this in mind I would trawl the internet for literally 10 minutes in order to find the best arm muscle building programme.

Would it be Kai Greene’s ‘Tricep Trauma’, Roelly Winklaar’s ‘Der Armen Splägen’ or Gregg Valentino’s ‘Fuck Me My Arm Has Just Literally Exploded, What A Stupid Cunt I Am’.

No, in the end I settled for Rich Piana’s ‘8 Hour Arm Workout’ which boldly claimed to add an inch to your arms in 24 hours.

Naturally, I mean there’s a physique anyone can emulate with just 30 years of training and a chemical arsenal like North Korea.

But that didn’t matter, the premise was simple, clear and appealed to my then sense of increased vanity.

Indeed, who wouldn’t want to grow something by one inch in a day…

You need to be seriously committed/unemployed to even attempt this absurd workout as it lasts eight hours.

I’ve heard along with sleep deprivation and water boarding, the mere suggestion than a Guantanamo inmate would be made to follow this patently ridiculous routine would be enough to have them revealing national secrets.

With that in mind you should take two full days off working out before doing this programme to let your body fully recuperate.

During prep, make sure that you’re getting 1.5g of protein per kilogram of body weight and plenty of complex carbs so you don’t fatigue mid way through D-Day.

You will also need to prepare 16 – yes 16! – protein shakes, as Rich Piana prescribes a shake after every mini-workout (more on this below).

These shakes should comprise protein, simple sugars and carbs to help refuel your muscles and replenish glycogen.

If you’re feeling particularly ambitious, you could always replace a few protein shakes with mini-meals to break the monotony.

It goes without saying that any meals will need to be prepared the night/morning before, particularly if you plan to do this at the gym.

They don’t take kindly to you unplugging the music system blaring out DMX and starting your hot plate up, I’ve heard.

In addition to the above, I can recommend taking creatine (if you’re not already) and chugging a few espressos throughout the day to keep your focus up.

Then allow 1.5 hours for your food to digest.

If you’ve got a dumbbell and barbell set then I suggest you do this workout at home as 8 hours at the gym could be highly laborious / make you look like a complete cunt.

Also, the gym staff might start to question whether you’re actually trying to move in.

A good hack (because if I use the word hack more people listen): if you’re one of millions of UK youths that has had their arm permanently scarred by your BCG injection then use this as a good marker to measure your arm, that way you’ll be sure to be measuring the exact same part the at the end of your workout/next day.

If not then just draw a line on your arm in permanent marker or head down to your local tailor and hope they don’t think you’re taking the piss.

Keeping things highly simple, you’ll do a mini-workout every 30 minutes alternating Workout A and Workout B, completing 16 mini-workouts over the eight hour period.

After each mini-workout, down a protein shake.

Thanks for sharing – much appreciated!

Aim to rest no more than one minute between each set and don’t start the day too heavy, this is a marathon not a sprint.

You’re going to be tearing muscle fibres progressively throughout the day so you don’t want to be failing on any set in the first 4-5 hours.

After you have completed the workout, Rich Piana prescribes a huge meal (I devoured a large pizza, chicken strips, milkshakes and a protein dessert) and two subsequent days off training to sleep (12-14 hours), relax and recover.

Just make sure you eat like you’re Henry VIII celebrating another new wife, eat until you can’t eat anything else.

This is a long fucking time to be working out so here’s a couple of tips to help you through the arduous day:

Do this with a group of mates

Group environments will certainly aid motivation and stop people from pussying out half way through.

Many people will train better in a group when egos start to kick in.

It’ll also help with the tedium.

Do it on a epic day of sport

If you’re trying this alone then make sure you’ve got plenty to watch on TV.

If you like cricket then one day of a test match will see you through, or a couple of football matches.

A lot of the growth you’ll experience on the day will be arm swelling and inflammation, so it’s best to measure your arm the following day.

For me, the resulting size was 16 inches, representing a total gain 0.5 inches.

Not bad, not bad at all.

The fact that I could barely lift a glass of water the next day was irrelevant to the gains.

The age old broscience adage of shocking your muscles into growth still seems to ring true, and this programme is about as shocking as it gets.

Think Prince Andrew being accused of soliciting steamy underage sex (to which he completely denies and various other statements such as ‘allegedly’ which make this sound non-libellous).

I’m not as vain as I once was, and now that I (thankfully) don’t take my bodybuilding advice from Flex magazine, I’ve found far more effective/less time consuming ways of stimulating arm growth than this batshit crazy programme.

I rarely ever curl or crush anymore and my arms have never been bigger or stronger.

That said, I fully recommend for anyone looking to break the normal arm inertia to give Rich Piana’s 8 Hour Arm Workout a go.

Not only is it muscle building, but character building. 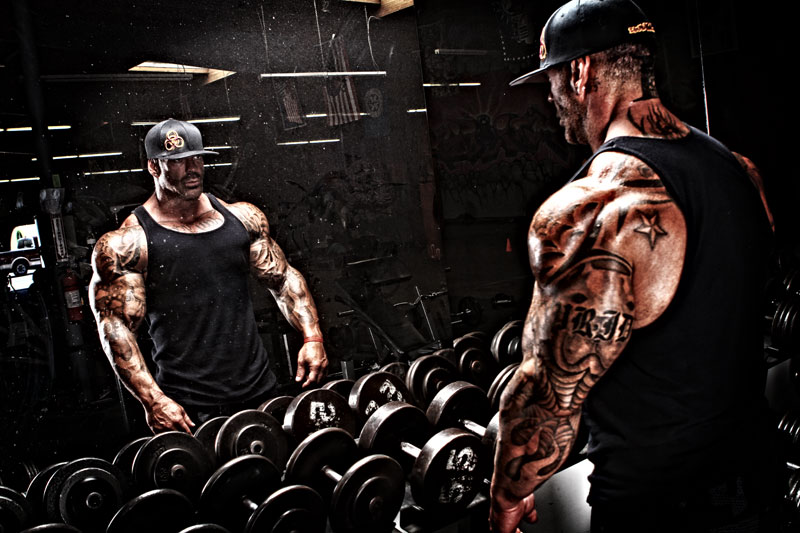 What do you think of the Rich Piana 8 Hour Arm Workout?

Is it worth a try?

Or would you rather spend a day licking curdled sweat from Iggy Pop’s dimpled ballbag?

Do you put value on anything this walking erection has to say?

Or do you respect his views on bodybuilding about as much as his views on the FTSE 100 or Middle East Peace Process?

Whatever your views, hit me up with a comment below!