Reviewing The 'NHS Diet' - The Nutritional Equivalent Of A Wet Fart

Reviewing The NHS Diet – The Nutritional Equivalent Of A Wet Fart

I was in my local pharmacy this weekend buying lollipops fashioned into whistles when my gaze fell upon a brightly coloured, food-addled leaflet promoting healthy eating.

Since it was the new year and I’d spent the last 10 days feasting and drinking like a Renaissance king, the idea of healthier eating in any format seemed appealing.

The leaflet in question was an NHS-issued, dietary advice publication, and, in this instance, ‘diet’ was meant as ‘follow a healthy diet’ and not ‘you need to diet you fat bastard’.

The NHS is a British institution and without doubt the finest publicly funded national health organisation in the world.

The brainchild of Winston Churchill, Florence Nightingale and Bob Geldof, it was established with the aim of providing world class healthcare to anyone and everyone, particularly the unemployed with four children by five different fathers.

Despite the NHS budget being protected in the most recent spending review, the current modus operandi seems to be trying to preemptively stop people needlessly using their services, i.e. eat healthily to avoid heart disease, diabetes and ugliness.

So naturally when I got home and took a closer look at this publication, I was expecting to see a delicious and nutritious daily diet to inspire a healthy body and mind.

What happens next will blow your mind… 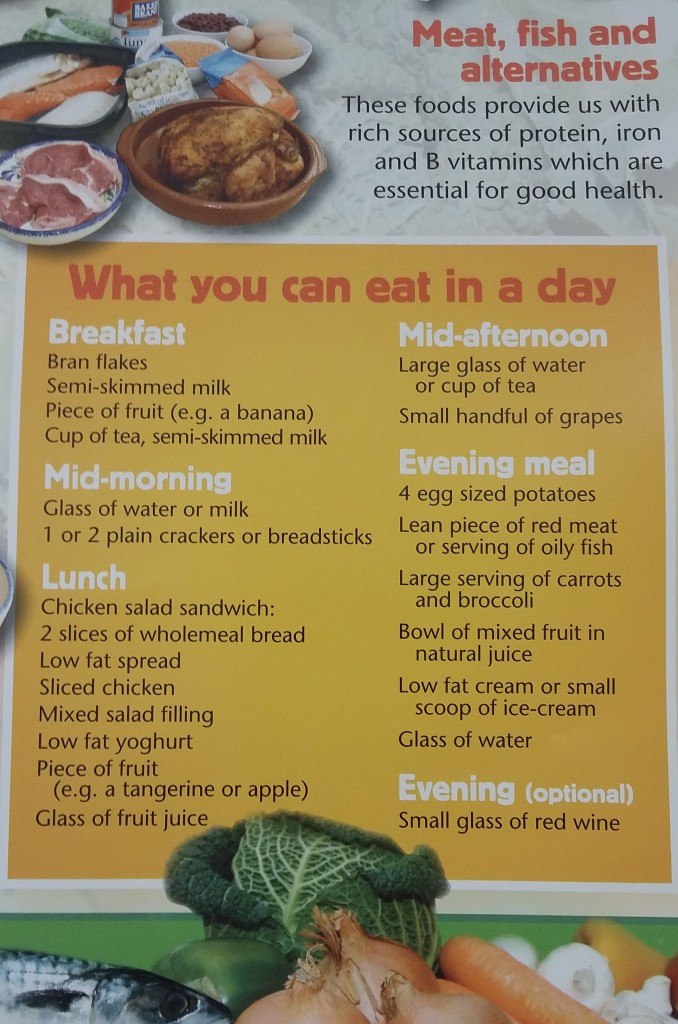 This looks like the diet of a grey-haired, 44-year-old, impotent geography teacher with a BMI of 22 whose idea of a good time is picking out a new period costume for his favourite cat – of which they’ll have at least four.

I mean, this is the nutritional equivalent of a wet fart, a platitudinous plateful of pity that not only will leave you sad and hungry but nutritionally unbalanced and probably overweight.

If we put this exact diet into MyFitnessPal then the headline figures look a bit like this:

And here are the NHS-issued recommended daily allowances for an adult female:

If we assume that MyFitnessPal is +\- 10% correct (not allowing for cooking oils/seasonings/sauces etc), then this recommended daily diet seems frankly bizarre.

Calorie and complex carbohydrate intakes is fine, but everything else emphatically misses the mark.

Most staggering is the amount of simple carbohydrates (sugar) in this diet, mainly caused by the amount of fruit and fruit juices you’ll consume throughout the day.

Let’s bear in mind that this poster will typically be aimed at people who have a less-than-active lifestyle and clearly no clue about nutrition because to follow this diet would be a bit of a catabolic nightmare.

Sugary foods can cause a large insulin spike when ingested, which cause food cravings and resultant fat gains, isn’t that right fatty?

As a general rule, your five portions of fruit and vegetables per day should be balanced at least 3:2 in favour of vegetables, while avoiding getting your fruit from juices or smoothies where you’ll lose precious fibre from the fruit skin and the enzymes in your saliva will not be breaking down the high levels of acidity in the fruit while chewing.

So, what would I do differently?

Well, below are my suggestions.

Appreciating that this was a simple one page leaflet, I’ll try to give a bit of detail as to why I’ve made alterations and give a couple of alternatives depending on whether you have the time to prepare something a bit more adventurous.

Low sugar Alpen contains both great slow release carbohydrates like oats and bran as well as a small bit of protein via some chopped nuts which take longer to digest than carbohydrates, meaning you’ll actually keep hunger locked up for longer, unlike the lying bastards at Shreddies.

The same goes for the omelette, and if you want to keep the fat content down slightly then buy an egg white mix from Musclefood.

The spinach is also a great asset to any diet, being high in fibre, protein, iron and vitamins A, C and K.

This meal will set you up perfectly for the day, the spinach in particular being a great source of early morning vitality.

I agree with the idea of having a carbohydrate based snack at this point in the day since you’ll be using the slow release energy up as the day progresses.

I suggest a wholegrain snack rather than a breadstick or cracker that’ll have little to no nutritional benefit and a refined white flour base which will not do anything to quell any pre-lunch hunger.

Wholegrain crisp breads can be found in most supermarkets, often topped with pumpkin or sunflower seeds which are a good source of fat.

The chicken salad sandwich is not the worst idea in the world, providing you use a quality wholemeal bread and your chicken does not come in a square shape (that will basically just be chicken anus).

Improve the salad with the inclusion of avocado to add a healthy source of fat.

The dark chocolate will kill off any hunger cravings for sweet/fatty foods for the rest of the day and is also full of antioxidants that’ll help you to feel energised for that 14:30 meeting with HR about those notes you’ve been leaving on the car that keeps parking in your spot.

Regarding the alternative vegetable chilli with turkey, as long as your office doesn’t have rules about not reheating delicious smelling food, then this is a real winner.

Incredibly cheap to make, cook it in large batches and it’ll give you 2/5 a day for vegetables as well as a fuck load of dietary fibre.

I’ve added turkey breast mine since I’m not a 18 century French Duke.

Lay off the complex carbs at this point.

I’d suggest either a handful of unsalted mixed nuts, carrot sticks and hummus and/or a small tangerine.

Et voila, a far healthier and more balanced meal plan for any day.

What’s more it doesn’t need to be as bland as Alan Rickman’s answer phone machine (may he rest in peace).

If I wack this daily diet into MyFitnessPal then the numbers look a little something like this:

These numbers, combined with some excellent advice we can offer you on strength and conditioning training will leave you feeling far more motivated and energised to lead a healthier lifestyle.

Most of the the ingredients for the meals can be bought at great prices from Musclefood or your local supermarket.

We all love the NHS but this poster is frankly a disaster, so if you’re looking for some New Year’s sustenance then give my daily diet recommendation a go.

I guarantee you’ll look and feel much better.

What’s your take on the NHS Diet?

Agree/disagree with any of my comments?

Let me know below!