The Kali Muscle Story - From Ex-Con To Icon | Gymtalk

The Kali Muscle Story: From Ex-Con To Icon

Bodybuilders are often stereotyped as self-obsessed, two-dimensional ogres who mindlessly lift slabs of metal in their vainglorious pursuit of aesthetic nirvana.

They are creatures of humdrum routine, dieting, exercising and sleeping with an eye on the clock at all times, day-in-day out, like Buddhist monks on swole, hungrily eyeing their goals through tunnel-visioned spectacles.

As a result of this steadfast dedication, and notwithstanding the odd eccentricity, such as Kai Greene sticking his trouser trout inside a grapefruit, many of today’s top bodybuilding personalities can be, for want of a better word, rather boring.

Watching their videos or scrolling through their Instagram feed can feel like you’re flicking through an office furniture catalogue while Tim Henman talks you through his sock collection. 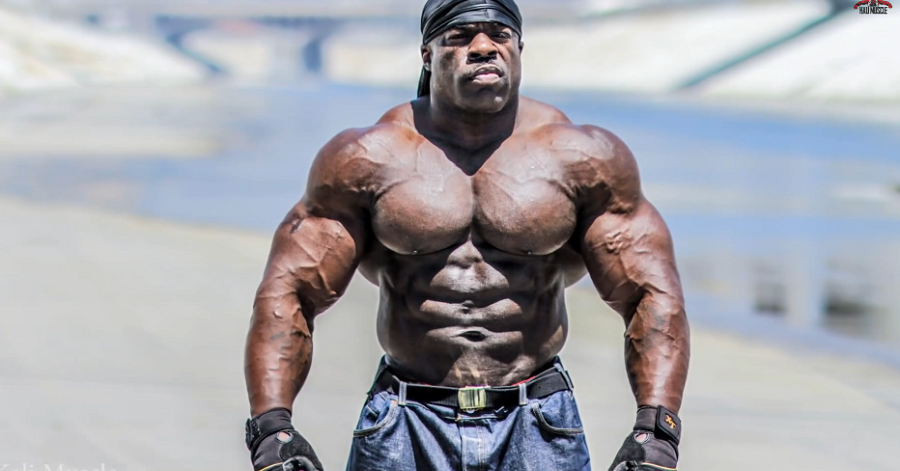 An exception to the rule

Kali Muscle is a man that tosses this stereotype on its head like a rusty old dumbbell.

Mr Muscle (a name which would have had more clout were it not for the aerosol oven cleaner) has been all of these in the course of his life.

Perhaps more importantly, however, this muscle-bound polymath has also become an inspirational figure.

His chequered path from ex-con to icon has blazed a trail through the bodybuilding world and he’s become a shimmering example of what anyone, regardless of their aspiration or background, can achieve when all the odds are stacked heavily against them.

Kali Muscle was born in Oakland, California in 1975, into a neighbourhood afflicted by crime and poverty.

One of three children, he was raised by his mother and step-father, who, in his own words, treated him as the ‘black sheep’ of the family.

As a wide-eyed teenager, he quickly developed a love for the gym, and landed his first job at 24 Hour Nautilus (now 24 Hour Fitness).

Plagued by the encroaching violence of his troubled neighbourhood (he was forced to own his first gun at Elementary School), this young man from Oakland found comfort in the sweaty, metallic fumes of his local gymnasium.

Outside of the gym, Kali excelled at a multitude of sports, including wresting and track, and received a football scholarship to Fresno State University, where he was a running back.

At this juncture, his life was on track.

Everything seemed to be going according to plan… 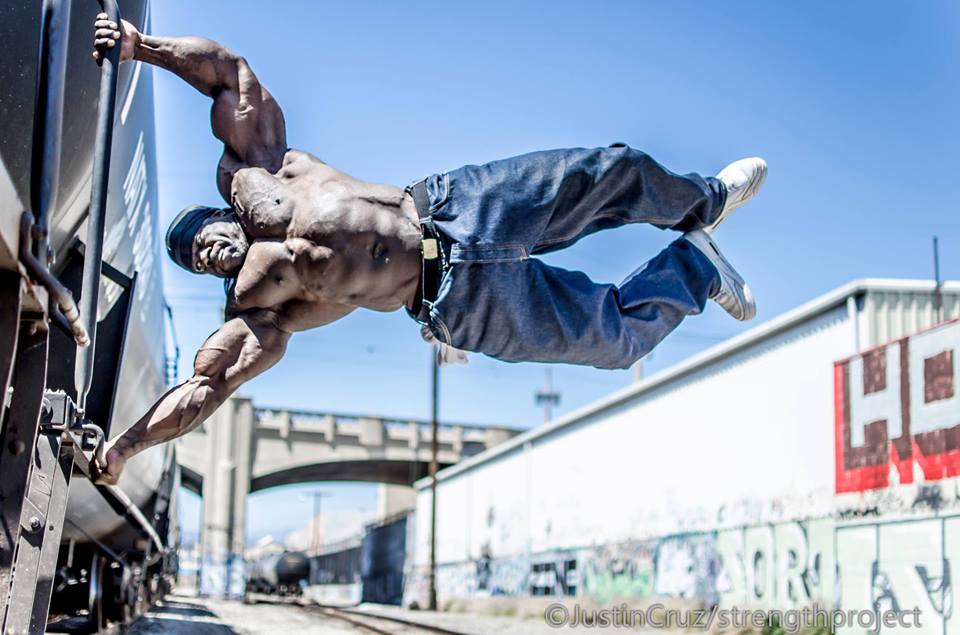 However, while Kali was in Senior Year, tragedy struck his family when his older brother was killed after ‘messing around with a gun’.

His situation spiralled further into woe, when, in his second year at Frenso State, Kali ran into grave financial difficulties, and soon found himself resorting to robbery to make ends meet.

He was later arrested and ended up in San Quentin State Prison, where he was to spend 11 life-changing years.

As a convict, Kali once again turned to bodybuilding for solace.

Working out incessantly, Kali began chucking iron about like it was candyfloss.

His new focus on building up his physique gave him fresh resolve, a fleeting escape from the mire of circumstance.

But disaster struck one again in 1997 when the decision was made to confiscate the weights from San Quentin.

In the video below, Kali recounts this fateful day in vivid detail:

As the backing music swells like an Ennio Morricone score, Kali describes how the inmates used oranges as makeshift projectiles to express their outrage with this latest change of events.

However, their fruit-based approach to protest was rendered impotent (obviously).

The weights were gone forever.

This determined bodybuilder was not going to let a silly thing like having no weights get in the way of his muscle building goals.

By other men’s bodies, I don’t mean their cocks.

I’ve been reliably informed that you’d have to pump out some serious hand reps to gain muscle that way.

This resourcefulness continued to frustrate his prison officers, and, on one occasion, he was sent to solitary confinement for refusing to eschew his passion.

In his recent ‘Prison Workout’ video series, Kali has finally revealed some of these workouts to the public:

Life on the outside: turning things around

In 2010, after leaving prison, Kali Muscle moved to LA to pursue his new dream of becoming a professional bodybuilder and actor.

After only two weeks of relocating, Kali was offered a role in a Matthew McConaughey-directed music video for Nashville icon Jamey Johnson.

This music video proved to be the launching pad this Oakland-born bodybuilder needed, and this gig was followed by a deluge of bookings to appear in commercials for big-name brands, including Snickers, Comcast and Honda.

Perhaps his most memorable advert was this one for car insurance giant Geico, which has given rise to the catchphrase ‘happy as a bodybuilder directing traffic’.

Joking aside, I would happily lobby Parliament with a petition to replace the smug-faces Lollipop Ladies which police our roads with an army of big black bodybuilders.

If anyone’s with me on this, let me know in the comments below, and Gymtalk will get the ball rolling.

Anyway, getting back on topic, Kali has also made the transition to television and film, taking roles alongside many Hollywood stars, as glimpsed in the video below.

He has landed a series of prestigious titles, including Mr California 2012, in addition to a collection of other first place wins.

Although he might look like a henchman in a direct-to-DVD Steven Seagal film, there’s a lot more to Kali Muscle than meets the eye.

He recently set up From Ex-Con to Icon, a scheme which aims to plant the seeds of hope into disadvantaged neighbourhoods by teaching youths that there is a way out of drugs, violence and crime.

Kali also works as a motivational speaker, where he delivers his uplifting  message of rehabilitation to diverse crowds, and is nearing the completion of his book, which will seek to instill similar hope across America.

Much like C T Fletcher, Kali publicly denies having taken any steroids, for which he has come in for a lot of criticism (i.e. “GTFO”, “hahahahaha” and “stop lying you big turtledick).

The purpose of this article is not, however, to revisit this monotonous discussion.

I do not wish to patronise you guys by telling you what you should think.

You can make up your own minds.

The real take-away from the Kali Muscle story is his inspirational, edifying, empowering journey.

From a troubled upbringing on the streets of Oakland, via San Quentin and solitary confinement, Kali Muscle has turned his life around to become a beacon of hope.

Whatever your opinion on him, the man deserves your respect.

He has shown that it is possible to transcend society’s shackles, and, with tireless motivation and goodwill, how anyone, regardless of creed or colour, can forge their own path to success.

In his videos Kali keeps telling us not to hate on his muscles.

And you know what?

Kali Muscle: I salute you.

All that’s left is for me to leave you with the immortal words of the man himself:

A gang-leader does 11 years of hard time in prison and decides that he will show the world that he will defy all odds and become a great successful human being even though society had labelled him an x-con.

Now, what is your excuse for not achieving the things you want out of life?

Get off your lazy ass and go get it! 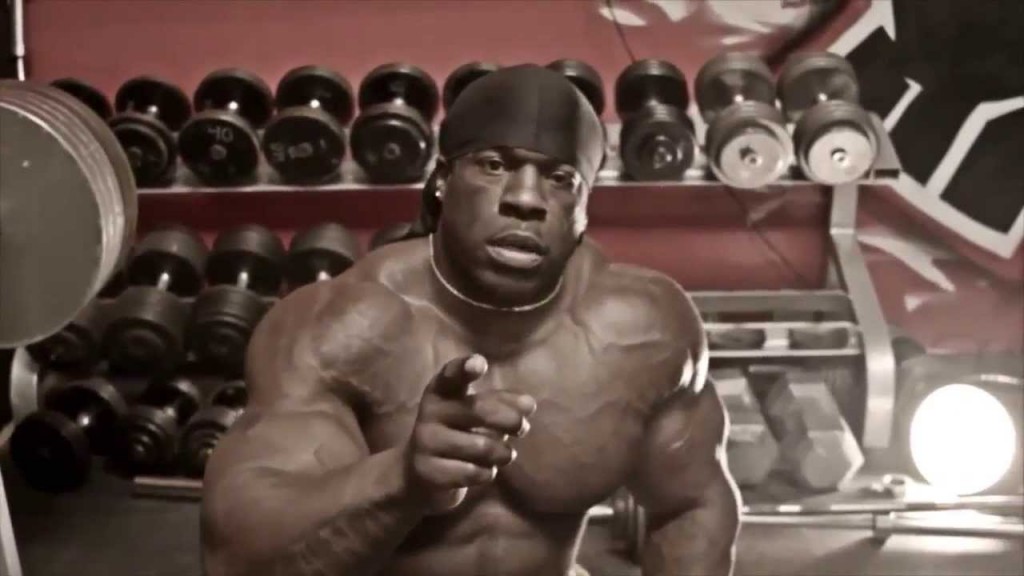 If you’ve got an opinion on Kali Muscle that you’d like to share, join the discussion in the comments section below, I would love to hear from you!