Gymtalk recently sat down with the UKBFF competitor Richard Wall, who recently finished fourth in his class at the 2013 British Champs, to discuss training, nutrition and recovery.

During the interview we managed to get a great insight into what it’s like to be a first-time competitor and a glimpse into the training and preparation that goes into a competitive bodybuilding show. 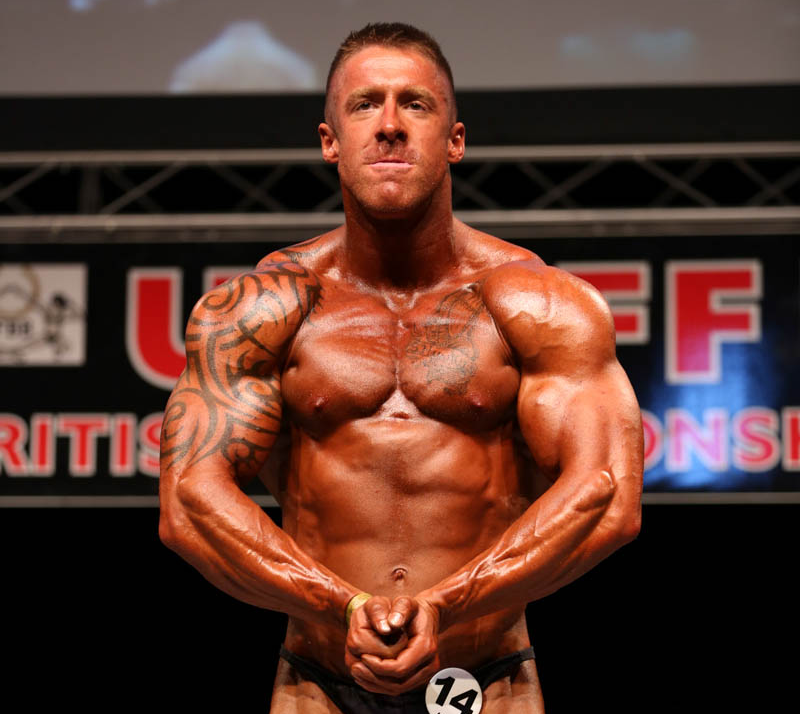 Thanks for your time.

So, you were in the beginners division at the UKBFF Kent Classic and you headed right into the British Finals.

As a beginner, was it the result you were expecting?

I went into the competition with an open mind, not really expecting anything.

To be honest when I was in the prep room I didn’t even think I would place as there were a lot of awesome physiques out there.

Was the Kent Classic the first show you’ve ever done?

Yes the Kent Classic was my first show.

What changed in your contest prep between the two shows, or was there a similar build up?

They had a fairly similar build up.

I was eating a lot more extra lean red meat coming into the British though.

I had to change certain foods up as three weeks out I came down with food poisoning which wiped me out for three days.

I couldn’t eat the foods I was supposed to be eating which gave me food poisoning.

However I depleted a lot more and loaded more coming into the British as I learnt from Kent that I could have loaded a lot more.

How did you fit your training and nutrition around the food poisoning?

That must have been very difficult!

Did you still manage to train as hard or did you have to back off a bit?

I had to have three days off from training due to the food poisoning and had to change certain things like rice to rice cakes, omelettes to hard-boiled eggs and fish to chicken and red meat.

I feel as though the mind is a powerful thing, and once you are able to train your mind into believing you are capable then your body will follow, so I got back to training ASAP. 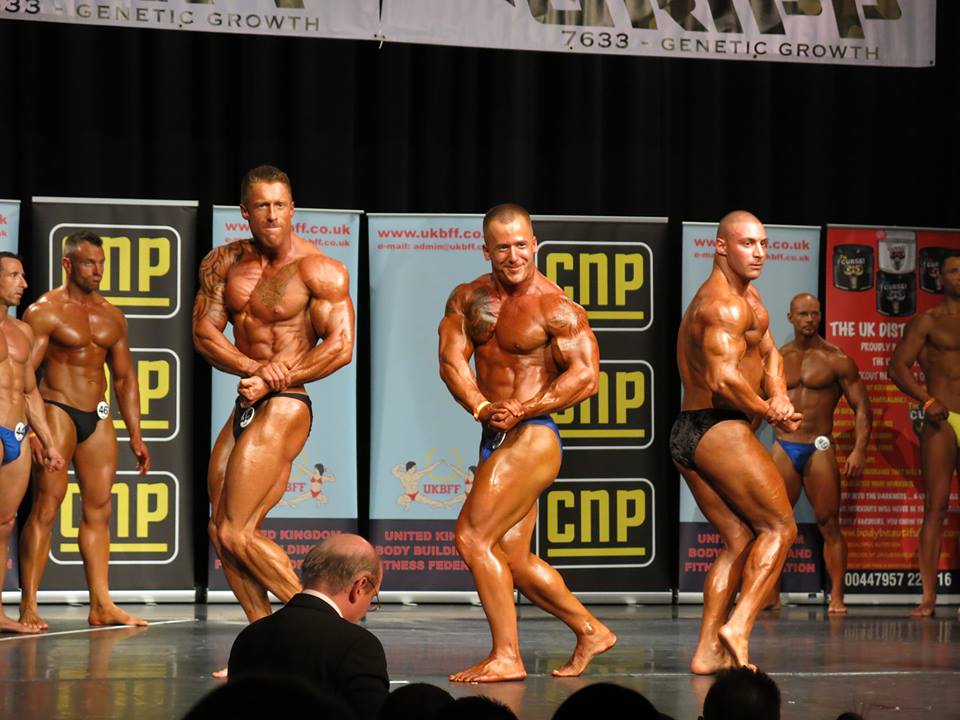 What did your training procedure look like in the run up to these two shows?

Do you change your training pretty drastically or do you keep it fairly similar to your off-season training and add more cardio in?

Cardio goes right up to twice a day an hour a time.

Training is one body part twice a week except for legs.

In the off season I do one week of a body part twice a week and the next a body part once a week.

One week aiming for reps the other for weight.

This type of training works well around having my daughter.

On that note, what are you planning in the off season?

What does a typical training week look like for you during that time?

I’ll do a body part once a week myofibrillar hypertrophy.

A lot of compound exercises.

Five sets for an exercise, reps between 2-5 heavy for myofibril tears, hence more time to recover as to why training a body part once a week.

Three sets for an exercise, reps between 8-14 for the sarcoplasmic filling/pump/volume hence less time to recover (3-4 days).

What are you looking to build on this off-season and what do you hope to bring to the stage next season?

I need to build a lot more mass and thickness in my upper body, so that means a lot of heavy lifting, negative reps, forced reps and rest pause.

I’m a strong believer in the rest pause system in building mass.

If you could only give three pieces of advice to anyone looking to compete for the first time, what would those three things be?

Try everything out first before competing to see how your body responds to certain foods, depleting strategies, etc.

It’s all very well reading up on methods but until you apply it yourself you won’t truly know.

Also read all you can as you can never know too much!

What features most in your training?

When did you decide to do your first competition and how did it go?

I’ve never said never about competing and I was in a good position to compete at the time, so I asked myself seriously, ‘Why not?’

So that was it, from then I committed to the idea and stuck to it 100%.

It kinda turned a bit one dimensional as everything was about the competition.

I feel as though it went well and I was more than happy with results.

How did you manage your nutrition in the run up to the finals, or any show for that matter?

What did most days look like for you in the run up to the finals?

I was up at 6am for an hour of fasted cardio.

I would often combine meal six and seven together as I was going to bed at 9.30pm.

So you were up early and early to bed.

Do you feel like sleep/recovery is a massively overlooked part of training for some people?

I believe that the three main components of bodybuilding are rest, nutrition and training.

They all need to be in sync with each other, and if one falls behind then you’re screwed!

Saying that, when dieting intensely you find that you don’t sleep much at all.

I had broken sleep and I was up early.

So I would often do my cardio at those times, be it on a stationary bike at home, out on my bike on the road or in the gym.

Always being an hour long.

Are you going to make any drastic changes to your diet this off-season?

I’ve never been into eating junk food nor do I have a sweet tooth, so it’s mostly going to be more of the same.

On that note, what’s your big indulgence meal?

What do you treat yourself to after a tough training session?

I love a good carvery.

You can’t beat a well-served carvery.

A good steak as well I love.

Maybe even a huge bowl of granola too!

Looking at a lot of the competition and shows recently, it seems the Men’s Physique category has been blowing up.

Do you see this as a common theme and what is your opinion on that category?

I admire all physiques and categories as I know the hard work that goes into it.

Which category do you see yourself going into now you won’t be able to compete in the beginners’ category?

I will be going into the under 90’s category next time.

ell Rich, thanks for your time, good luck in the off-season.

Everyone at GymTalk will be looking out for you next season no doubt!

Thank you very much for this opportunity I appreciate your time.

Thank you very much.

For more from Richard Wall, connect with him on his social media profiles: 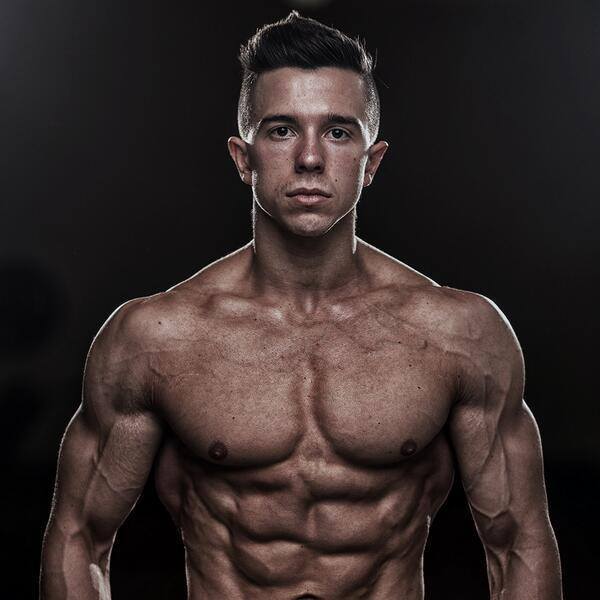