Homemade Protein Shakes: The Good, The Bad & The Ugly

Homemade Protein Shakes: The Good, The Bad & The Ugly

As a poor student I rarely had the capital to spunk on designer protein supplements.

What little money I did have was usually invested in ping pong balls, fake mustaches and all-you-can-eat Chinese buffets.

I didn’t, however, let this financial situation get in the way of my relentless quest for bulk, and I soon began scouring pockets, cupboards, supermarket shelves, nightclub floors* – anywhere I could lay my hands on that elusive shot of protein.

* I didn’t actually do this, of course, but I’m fairly sure that the stickiness of our student nightclub floor was not just spilt snakebite. Hoovering up that syrupy sludge would provide a monstrous protein injection, instantly. And get you pregnant.

So, armed with my trusty food blender (£20 from Asda, absolute steal), I began experimenting with a succession of homemade protein shakes, many of which are now infamous in the bodybuilding community.

Some were surprisingly palletable while others required a sick bucket and mouthwash of bleach at the ready.

Here are three of the homemade protein shakes which I tried:

The Good, The Bad and The Ugly…

Peanut butter is one of those protein sources that seems to be largely unacknowledged by the bodybuilding community.

Which is a shame, for not only is it ‘real’ food, but it tastes great and is really cheap.

However, a few tablespoons topped up with half a pint of milk can get you easily around 30g of protein.

There’s nothing much else to say about the peanut butter smoothie.

No jokes to be made here – it’s just nice a homemade protein shake.

(I could say something about swallowing ‘nuts’ but I’m not a c**t.)

You can pick up huge tubs of peanut butter with no added sugar or salt at most online protein vendors  for just a couple of quid (or even less with our discount codes), which should be more than enough to keep you going for a few months.

Relatively cheap to produce and delicious to boot, the peanut butter smoothie is the perfect homemade protein shake for the bodybuilder on a budget.

Eggs have gotten a bit of a bad rap in recent years because of salmonella.

To be honest, I didn’t give a badger’s arse about this.

If Rocky Balboa drunk raw eggs, then they’re fine by me.

Heck, if Rocky Balboa downed a pint of raw sewerage, I would probably follow suit.

The toughest thing about getting this one down is the consistency, as it’s about as gloopy as Brian Blessed’s ejaculate.

And if that wasn’t enough, you usually end up looking a right tit with yolk all over your chin.

But, as with all unsavoury homemade protein shakes, the trick is just get it over and done with as quickly as possible.

Having the right mindset is key.

It’s like when you’ve decided to commit a finish mid-way through a wank.

However much penis your eyes clock during the climatic seconds should not deter you from reaching your goal.

When it takes a few minutes to just scramble the damn things, I don’t really see the benefit of downing raw eggs.

Unless it’s for a dare.

But even then be careful, you don’t want to end up like this knobhead in Tunisia:

Man Dies After Eating 28 Raw Eggs For A Bet.

Tuna And Sprite (The Ugly)

Ingredients: Tin of tuna, can of Sprite (all liquidised together in a blender)

The tuna and Sprite shake seems to split opinion.

Many say that watery tuna is an acquired taste but I found this concoction to be truly ghastly.

It was a colossal struggle to get down.

The process was basically:

I threw this concoction back up along with all the protein from my last meal.

So basically it gave me -30g of protein. 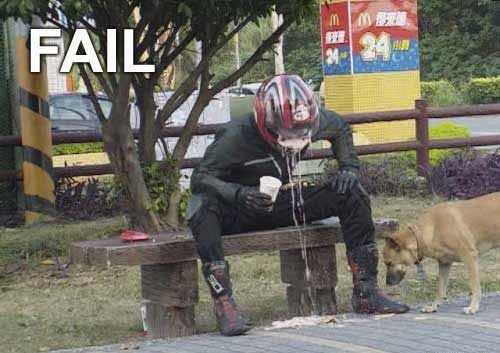 What homemade protein shakes have you tried?

Are there any more classic homemade protein shakes that I’ve missed from this list?

Have you managed to concoct a homemade protein shake that doesn’t taste like absolute cowshit?

If so I’d love to hear from you – hit me up in the comments section below!