OK, yeah, you might think we’re getting a little bit less macho here.

What a bunch of sell-outs.

But don’t worry, we’re not about to go full Men’s Health style on you and recommend a bunch of bullshit moisturisers that cost more than a month’s gym membership and are modelled by Justin Beaver.

This is a primer on the very best of male grooming, introducing you to the type of stuff that once you start using, you’ll be using for the rest of your life.

So throw away your Lynx Africa and Tesco 49p wet look gel, you fucking sap, and take note.

For your pits: Mitchum

If you train hard, you’ll want to start with your armpits when it comes to male hygiene.

No matter what people might tell you about pheromones, women can’t stand a bloke who stinks of B.O.

If you were Ryan Gosling, yeah she’d probably be into you even if you smelt like three-day-old mouldy diarrhea, but you’re not, and with a bit of B.O in combination with sweaty gym clothing, you’re going to give off a real Texas Chainsaw Massacre vibe.

And, for that matter, your fellow gym comrades don’t want to smell you while they’re spotting you either.

We’ve tried about 50 deodorant brands and Mitchum is by far the best in terms of keeping away the B.O. for the entire day, no matter how much of a sweaty bastard you become.

You apply Mitchum either before bed or right after a shower, but it must be left to dry as this is where it works its magic.

It’ll literally keep you dry all day long and only costs about £3 for a roll-on that will last you months.

Dry yourself completely after a shower.

One of the leading causes of disgusting man stench is not drying properly under the arms and round the back.

For your bits: Gold Bond

I don’t know about you, but after a hard training session my body temperature is elevated for the rest of the day and I’m sweating like Peter Andre on University Challenge.

The previous section covered your pits, but what about your other regions?

That’s where Gold Bond comes in.

Gold Bond is basically a lot like talcum powder, but it actually contains no talc (apparently terrible for you for some reason) and is also ‘medicated’.

Long story short, you put it on your Major Johnson, Private Adams and Lieutenant Arsecrack, and it keeps you fresh as a daisy all day long.

Gold Bond is something which at first seems just plain weird, and suggesting it to friends I’ve gotten some surprised responses, but once you start using it daily you’ll never want to go without it.

It’s particularly handy if you’re in the fitness business or are training all day long, and don’t always get the chance to shower right after workouts.

It’s also great if you work in an office environment and want to stay comfortable all day long.

You’ll usually be able to pick up Gold Bond on Amazon as it’s not readily available from stores in the UK, but you can get an alternative called Lanacane (which is almost identical) from most pharmacies.

Don’t use Gold Bond on your ‘Private Ryans’ if you know you’re going to be getting lucky within the next couple of hours – the minty fresh sensation is for you only!

Be a man – have a proper shave

For some reason men fell out of love with shaving sometime in the 60s.

Before then it was a cherished activity, either in the barber shop or at home, something almost like meditation for a bloke.

And we think that’s a shame, because if you’ve ever had a ‘proper’ shave, it’s one of the most relaxing yet manly things you can do without having to smoke, shoot or shag something.

Thanks to advertisements in ‘publications’ like Zoo magazine, which we all ‘read’ when we were 14 years old (for the tits), modern men grow up thinking that a 15 bladed gel coated vibrating chin shaped razor is the best thing to slice your face open with.

But all those adverts are mostly just a bunch of marketing bullshit, and the simple fact is you can’t beat a single blade shave.

There’s actually a lot of strain on your skin when shaving with something so close as the modern 2+ bladed razors, and you’re more likely to get ingrowing hairs from them.

So to start off your journey into shaving how a real man should, you’ll want to get a single blade razor.

These come in either butterfly two sided styles, or an old-school cut-throat (the latter being the more bad-ass of the two as you’ll feel like you’re dicing with death).

The butterfly razor is also known as a safety razor, but don’t be fooled by that name, as it’ll still cut the face of an amateur Gillette Fusion Mach–3 Proglide 5000 user.

For a butterfly razor you can’t go wrong with a Feather Safety Razor and the Feather blades are incredibly sharp too.

Seriously, practice with some Wilkinson Sword blades before you move on to Feather!

As for a cut-throat, the Murdock London Elliot Straight Razor is really smart and will last you ages.

If that’s too expensive you can pick up a cut-throat on eBay for literally less than a tenner.

To refill the cut-throat, either use single-sided blades or snap a double sided blade in half.

It’ll take you a bit of getting used to either types, but the best way to learn how to shave without cutting your face to bits is to start with the butterfly and when comfortable with that you can start on the cut-throat.

For more tips on shaving technique, check out the excellent Art of Manliness guide on the subject.

A sharp cut-throat razor is great for cutting off stray callouses and other disgusting bits of your hands that arise from heavy deadlifting (if you’re not seeing callouses, lift heavier!).

Another essential for shaving is to ditch the crappy foam or shaving gel and go for a traditional shaving brush with a bowl of shaving cream. 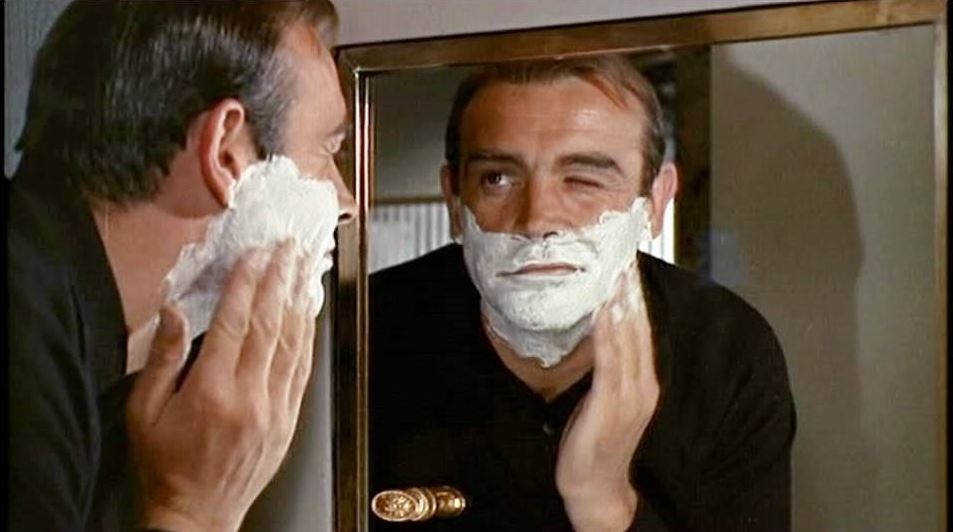 Lather the cream up using a damp shaving brush and it’ll give you a shave a million times smoother than any supermarket shaving rubbish from a can.

Not only that, but the razor, brush and bowl combined with a stylish stand will look really snazzy in your bathroom, and give you a sense of feeling like you’re better than everyone else – which after reading this article you technically are.

Our favourite shaving bowl is the Kent Dark Oak Wood Bowl – from a company that is over 200 years old.

Shave right after a shower, your facial hairs will be softest then.

Aftershave is a tricky one, because you’ll likely have a bunch lying around that your auntie bought you as a Christmas gift.

The thought was there, but it’ll make you smell like a baby prostitute.

Yeah that was a Mean Girl’s reference, what you gonna do?

The best kind of aftershave is one that stops razor burn, smells like a man would actually wear it, and doesn’t cost a bomb.

A good rule of thumb is to avoid anything with David Beckham’s face on the front.

Proraso is a really old school product, dating back to 1948 and is available in most good pharmacies for only about £15, or even less on Amazon.

It’s a much more manly, musty smell than most aftershaves from big brands, but one that most people will prefer, and because of its old school bottle it’s perfect for a bit of post shave healing pain.

Your skin absorbs way more than your digestive system, so bear that in mind when using shitty products on your face.

Stick to natural ingredients like in that of Proraso.

As the great Ron Swanson so graciously put it:

This applies to the gym dweller more than anything.

If you’ve got a big bonnet flopping around, it’s going to become a problem, so get that fucking mop trimmed and keep the sweaty hairs out your eyes.

And to make sure your hair stays in one place, we recommend nothing but the best: Layrite Superhold Pomade.

Layrite puts most pomades to shame as it easily washes out of your hair unlike other products, it’s not greasy as hell, and it smells amazing.

The look your hair will have from Layrite is definitely an old-school one (think Michael Corleone), which may put some people off, but it’s a manly look that will never go out of style.

It’s on the expensive side, but will last ages.

If you can’t afford that, then go with a more readily available product, but make sure you avoid moose, hairspray, wet look gel and anything with the word ‘surf’ on the label to avoid the dreaded ‘pedo hair’ (scientific term).

Smelly breath is one of the quickest ways to get people to immediately dislike you.

We’ve all been in that situation where someone’s breath stinks and you can’t even concentrate on what they are saying.

Listerine is the only mouthwash worth getting, period.

Use it every morning to ensure you’re fresh for the day, and if you can handle the heat, you should definitely use the Original Listerine.

It’s basically like gargling with TCP and fire, but nothing will make your mouth fresher.

Original Listerine can be used as aftershave if you’re desperate – seriously.

We’d love to hear your suggestions in the comments as to what you use in these categories.

And make sure you tag a mate on Facebook who has pedo hair using the line “sort your look out you sack of shit”.