When I used to put the words ‘female’ and ‘bodybuilding’ together, a rather disturbing image of Arnie wearing a teeny bikini, with long hair and lippy on would spring to mind.

An image forced upon me by the media as I grew up I’m sure.

On few occasion this is most certainly the case, but overall it’s not true at all.

Becoming part of the ‘Fit Fam’ has been an eye opening experience so far.

I’m still a newbie to the industry but I’ve experienced so much and met so many interesting people along the way, most of whom have put many of my misinformed preconceptions to rest. 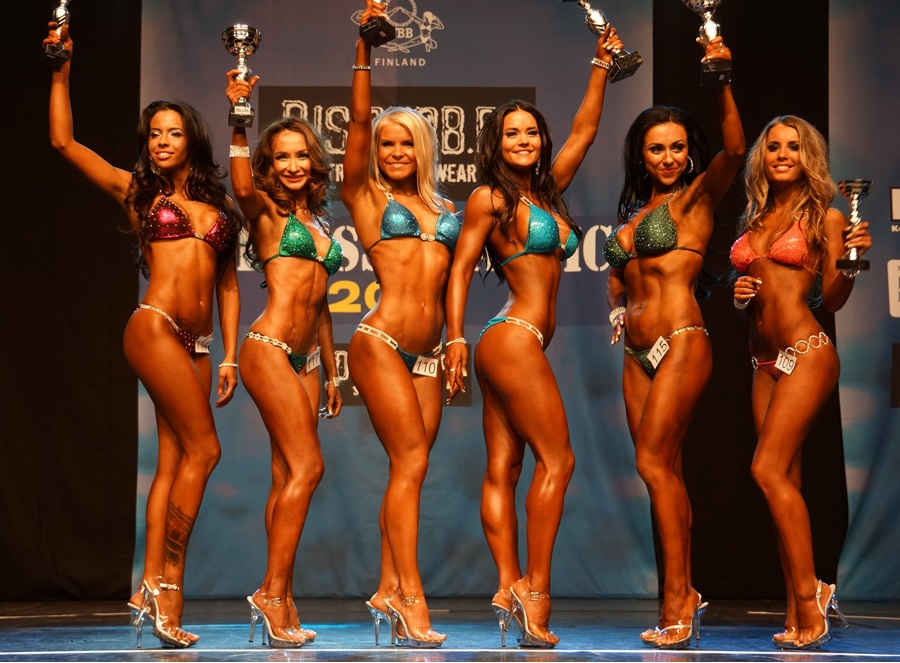 Beautiful, graceful, poised, perfection; words you may use to describe a high fashion model or a beauty queen.

But that’s not who I’m describing.

Bikini Fitness and bodybuilding chickas alike all fall under this description.

When I think of the girls I’ve seen on stage, the words empowering, inspiring, motivating, flawless, strong (mentally as well as physically) also spring to mind.

They are the girls taking the look of the super model and pushing it to stallion level.

They are the Lara Crofts of the world. The Superwomen. Our new heroes.

Strong is the new skinny after all.

So what is the Bikini Fitness Class?

Here’s a little history lesson for you, pay attention…

When bodybuilding kicked off it was a completely male dominated sport.

But gradually, by the late 1970s, female bodybuilders were claiming their spot on stage and proving that they can do just as good as the guys.

It was never a doubt we could – it was just a case of girls realizing they CAN be strong and they CAN make a difference.

It began with Female Bodybuilding, and then Fitness and Figure was introduced.

Now we have Bikini Fitness.

In short, the women’s categories are:

The category where contestants have a substantial level of muscle tissue and are shredded with clearly visible striations.

These girls are the biggest out of all classes and have much more muscle maturity and size.

This category is a little smaller, with two rounds of posing and a routine, and shows the physical ability of the contestant.

Competitors must have a fair amount of muscle development, clear muscular separation (but no striations), and a good level of leanness.

This is reasonably new to the scene, with contestants simply taking part in quarter turns and excluding the routine round.

The girls are judged purely on their muscle definition and symmetry, with two bikini rounds.

This category was created to allow a wider range of women into the world of physique competitions, with much less emphasis on muscularity and leanness, but rather on proportion, symmetry, balance, shape, skin tone, as well as the overall stage performance, styling and poise.

Recognised by the IFBB as an independent competition category on 7th November 2010, Bikini Fitness has rapidly grown as a category within the industry, bringing light to stars such as the UK’s first Bikini Pro athlete, Michelle Brannan.

In 2010 the first Bikini Olympia was introduced and in 2013 Miss Brannan made it to that very stage as the first UK Pro at Olympia.

The stars of bikini fitness

So bikini fitness is big, we’ve established that.

But who are the stars driving this fabulous category forward? 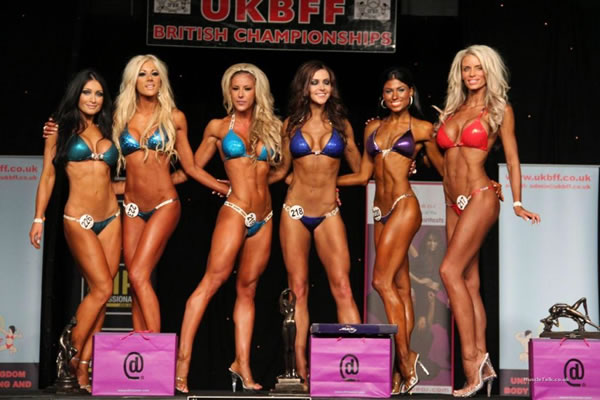 Well since being introduced to the sport two years ago, I have watched many girls work their way up to the highest levels, showing the world it is possible to chase your dreams and achieve them.

Some of my shining stars include:

And my girl crushes go on…

Training to become a bikini athlete 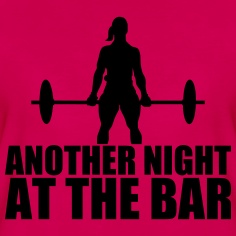 We all know how much grind goes into creating the body of a goddess.

But do you really know the hard work these girls put into prepping for their shows?

For me it was tough but I loved every second of it.

I started off with my off-season diet, which is a lot stricter than the average 22 year old.

Going out and socialising took a back seat while I worked my butt off.

I got a lot of negativity from friends and family throughout.

People are afraid of what they don’t understand and they couldn’t understand why I wouldn’t eat chocolate, crisps and get blind drunk every weekend.

Above all, I didn’t want to lose control.

The whole point about being a Bikini Girl is being empowered and in control.

And not letting society force you to conform to a negative way of living.

There’s nothing wrong with turning down nights out with friends, for a night lifting on a Friday night.

It makes a lot more sense to me.

I got my head down and attended seminars and workshops held by bikini girls to learn exactly what it takes.

I went to shows to experience what it was all about and I started posing practice months in advance.

I had my bikini made, bought my heels, carefully coordinated my accessories to my look, and had my hair and nails done.

The cost adds up and it gets expensive.

Before my first competition I started dieting 11 weeks out, where I gradually dropped calories to lean up while conserving my muscle tissue.

At 3 weeks out it was very tough because it turned out I had peaked then and there!

So I had to spend the rest of the time before my show maintaining my look.

I think it’s harder for bikini girls to get it right on most occasions as it’s all about timing and knowing your own body down to a tee.

The whole week before, we water load in order to force your body to flush out water ready for shred city. 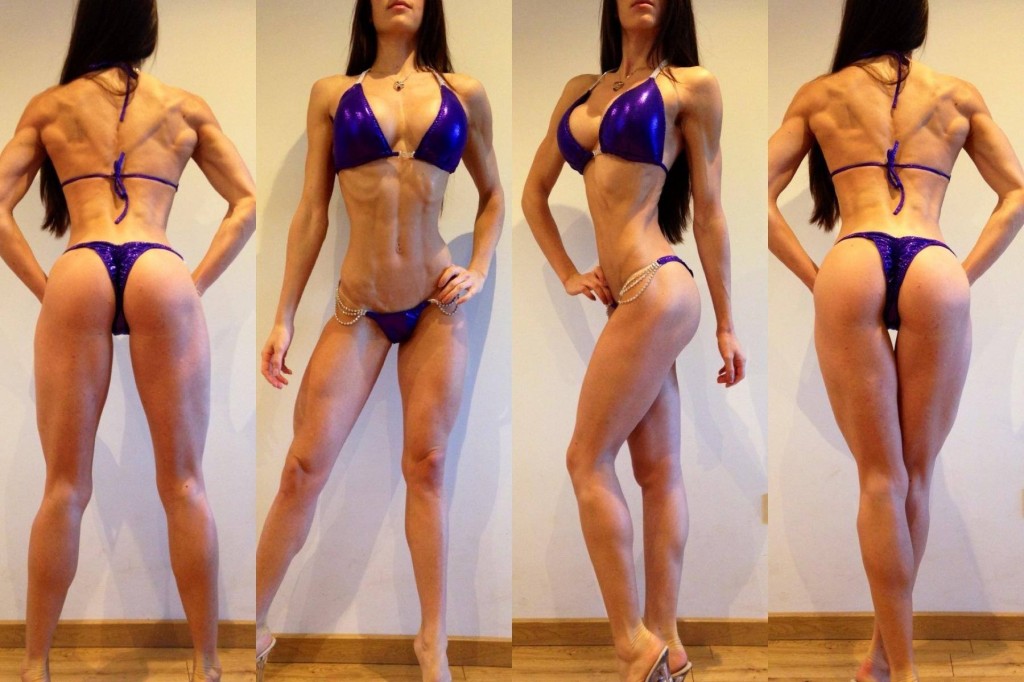 Usually we carb load but as I had already peaked we didn’t want to play around with carbs too much, seeing as it was my first show.

We didn’t know how much water I would take on so we just kept the carbs slow and steady.

There’s a real science to it and my PT Sam took great care of me through the process, ensuring I stayed healthy.

The day before the show I applied my first layer of tan, then applied my second and third layer early the next morning before setting off.

After the athlete’s meeting, I had another 9 hours to wait until I had to go on stage.

The longest 9 hours of my life: surviving off turkey, steak, egg whites, banana and rice cakes every hour, with zero water.

CAKE was the first thing I ate when I stepped off stage.

Dieting makes you obsessive over food and I think I went a little crazy, buying every pack of biscuits I could find for my stash.

Five months later I’m still going through them on my cheat days!

Bikini girls can handle the tough training in the gym.

What IS tough is the mentality of the sport.

If you are not a strong-minded person it can mess with your head and your confidence.

But then again taking part in the sport can help build that inner strength and self-confidence.

As long as you are an individual who doesn’t give up and can visualize the end result, you will be a success.

‘Where is Bikini Fitness heading?’ I hear you say.

Well, in a mere three years the sport has taken off for Bikini Girls.

We are the face of fitness, the achievable goals, the realistic dreams.

We represent a new generation of stronger, determined, elite women and our goals are to inspire generations after us to be better than the rest.

Georgia Simmons, IFBB Bikini Girl, was recently shot for a fashion editorial, representing how strong is the new sexy and how fashion is taking a step into the world of fitness.

There is light at the end of the tunnel and it’s shining brighter than ever.

There’s a lot more to come from us Bikini Babes and you’ve not even seen half of it yet.

So you had better watch out, we’re taking over! 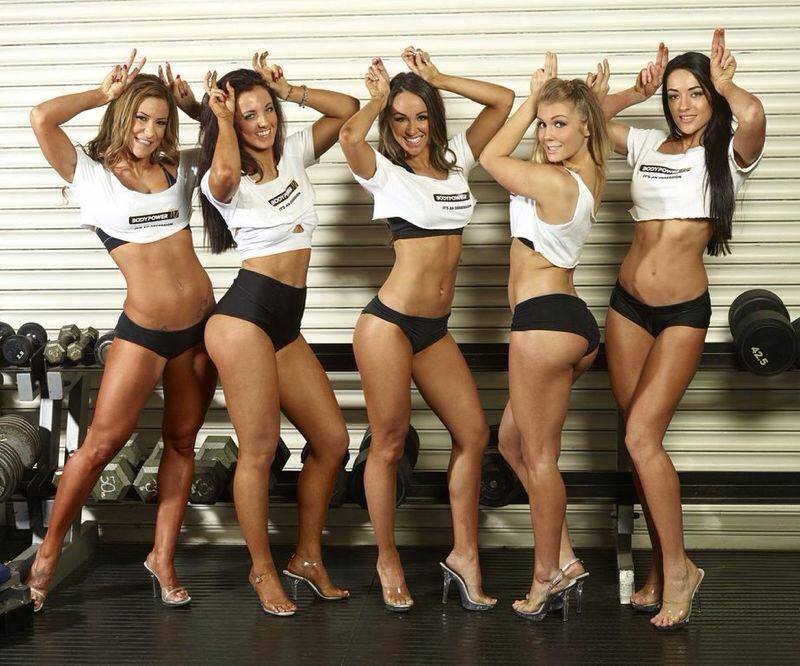 Emma is a UK Bikini Fitness athlete and winner of the UKBFF's 'Stars of Tomorrow' 2013. When she's not hitting the iron in the gym, Emma can be found working as a media consultant for a designer in the wedding industry.