Mutant Mass Review - The Best Gainer On The Market?

Pound for pound, Mutant Mass is the best weight gainer on the market. Highly recommended for anyone looking to pile on slabs of muscle mass in a short period of time.

I had just finished my first marathon and after four months of endless cardio, vaseline and one very sore ballbag, I was left looking a little on the slim side.

I wanted to gain muscle mass – and fast.

It’s not that I didn’t mind looking a little slimmer, I just wanted to build some serious, intimidating bulk.

Let’s face it, Mo Farrah might be able to run a mile in 3.30 minutes, but tasked with ordering a round of WKDs at Wafou Norwich on a busy Wednesday night?

While my gym programme was shaping up nicely (I was doing Stronglifts 5×5, a no-nonsense full-body routine which focuses on squat, deadlift, bench, rows and overhead press), it became apparent that I needed to turbocharge my diet for the sizeable results I was after.

It was at this point that a friend recommended I try Mutant Mass.

In his professional opinion, I would “hit 17 stone on this bad boy – instantly”.

True to its name, Mutant Mass is an absolute behemoth amongst weight gaining supplements. 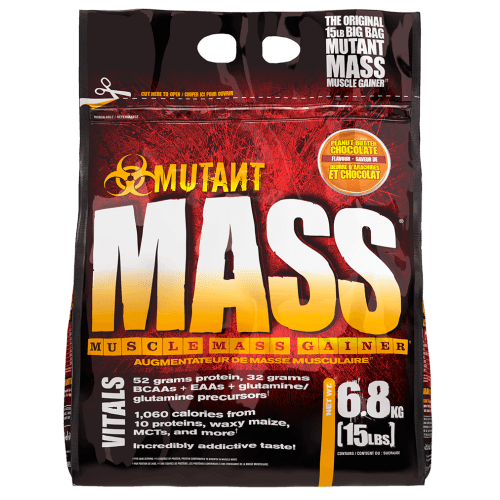 It packs a multitude of impressive ingredients, but perhaps the most eye-popping USP is the sheer amount of calories it contains.

Let’s put that in perspective…

That’s about the same number of calories as a typical Sunday roast – in one shake.

When it comes to the rest of its goodies, per serving we’re looking at a nice ratio of carbs to protein (182g clean carbs, 52g protein), a decent blend of amino acids (great for aiding recovery) and some high-fat MCTs derived from coconut oil.

Per 260g serving, the nutritional profile shapes up as follows:

The recommended number of scoops is four per serving.

By the very fact I had to shovel this colossal of mound of powder into two separate shakers, I knew this experience was going to go one of two ways:

One way was good, the other… would be fucking horrible.

I used a blender to mix Mutant Mass with milk, and I was pleased to find that, on drinking it, lumps were minimal.

However, due to the absolute tidal wave of calories, it was still a struggle to get down.

I tried shaking it once, without a blender, but never again.

Getting the thing into a drinkable state required a titanic effort and considerable wrist strength – think power wank.

Taste-wise, I had no complaints.

I opted for the ‘Cookies and Cream’ flavour and, quite frankly, it tasted delicious.

Mind you, I was a student at the time, so bear in mind my palette had been corrupted by a strict diet of burnt toast, kebabs and industrial strength cider.

The 6.8kg bag of Mutant Mass lasted me just over three weeks, and in that time I achieved some pretty impressive size and strength gains.

Alongside a high calorie diet, four one hour workouts per week, and minimal cardio, I put on about half a stone in weight.

And the good thing was that most of this bulk was clearly muscle mass.

Obviously, with a weight gainer of this magnitude, it’s never going to be 100% muscle.

Inevitably, I grew a little bit of a gut – but nothing some increased cardio wouldn’t fix.

Perhaps more impressive, however, were the strength gains.

Prior to taking Mutant Mass, I had plateaued at around 85kg for 5×5.

During my three week stint with this mass gainer, I was able to increase the weight I was benching on 5×5 from 85kg to 95kg.

What’s more, I managed to increase the weight I was pushing on all my other compound exercises quite considerably, with similar gains on the squat, deadlift and press.

WARNING: As well as building mutant size, this product will give you some serious methane issues.

I cleared offices, supermarket aisles, tube carriages, and, on one occasion, around 25 people from the dancefloor of my student union.

And if that wasn’t enough, every shit was like giving birth.

This stuff made me feel continually bloated – it was like digesting cement.

DO NOT drink Mutant Mass before a night out, otherwise it’ll be turtle bellies all round.

Obviously it’s not cheap, but for what you get, it is, in my opinion, one of the better value weight gainers on the market.

It’s certainly a safer bet than some of the bargain basement brands out there (Myprotein Hard Gainer Extreme comes to mind) which are saturated with sugar and fillers rather than high-quality MCTs and complex carbs (waxy maize starch etc).

Mutant Mass is certainly the best mass gainer I’ve ever reviewed and Will Kennard reaches the same verdict in our must-read Mass Gainer Showdown.

Pound for pound, Mutant Mass is the best weight gainer on the market, and is highly recommended for anyone looking to pile on slabs of muscle in a short period of time.

For the best price on Mutant Mass, head over to Amazon where you can usually pick up 6.8kg for well below the recommended retail price.

Have you tried Mutant Mass or are thinking of giving it a go?

Are there any other mass gainers that you’d recommend?

Any other questions about Mutant Mass, training or supplementation?