One of God’s finest creations – the ultimate test of strength, static power and badassery.

An exercise that even your average gym newb can safely attempt and reap generous gains rather than wasting their time on pointless machine exercises.

Deadlift is also the blue riband event of the powerlifting meet – the crescendo, if you will – and an exercise that is as brutal as it is simplistic.

While I’m not an international standard powerlifter, deadlift has always been my favourite exercise and I aim to train it once per week following various different programmes like Stronglifts 5×5 and 5/3/1.

Yet over the past six months my deadlift had hit a bit of a plateau.

I tried mixing things up with deficit deadlifts, sumo deadlifts, varying stances and some supplementary work (good mornings) but nothing seemed to work.

It was at this juncture I stumbled across Ed Coan’s 10 Week Deadlift Programme.

Edward “Ed” Ignatius Coan (and I really haven’t made that up) is an American powerlifter.

Having set 71 world records during his career, Coan is widely regarded as the greatest powerlifter of all time.

As you’ll probably agree, he seems like a fairly decent deadlift sensei.

And although there is no evidence that Coan ever performed this programme himself, Phillipi credited this ten week routine for increasing his deadlift from 505lbs to 540lbs.

Then again, looking at Phillipi and knowing he won America’s strongest man in 1997, I don’t think it’s unreasonable to think he should’ve been lifting more than this anyway.

Everything around this 10 week programme centres around deadlift.

Your primary exercise is deadlift.

Your secondary exercise is deadlift.

Your accessory exercises are composite parts of the deadlift.

The ideology is simple – specificity.

If you want to get stronger at a particular exercise, then you need to be practising it regularly in a variety of different sets, reps and speeds.

By way of example, lat raises are noooooo gonna improve your military press.

You’ll then do a ‘circuit’ of accessory exercises to build up lower back, hamstring, glute, lat, trap, and grip strength.

The programme is to be performed once per week alongside your regular training programme (I’ll come onto this a bit more later).

The routine works out as follows…

For ease, I have created a helpful spreadsheet which you can use to calculate all of your lifts for the duration of this routine.

Thanks for sharing – we appreciate it!

If you commit and follow this programme to an absolute tee then you will hit your deadlift goal and more.

Personally, my “desired max” target (200kg) went up with all the ease and speed to a 14-year-old school boy’s hand when the teacher asks if anyone wants to help the Scandinavian exchange student Bjork Hugeracksen with her German oral revision.

Furthermore, the week after I finished this deadlift programme I was able to lift 205kg.

A lot of this will simply come down to structure – if you turn up to the gym with an exacting plan then you’re far more likely to hit your goals than just turning up and lifting stuff.

But, in the main, this is a fantastically constructed deadlift programme structured around the requisite parts of the movement.

The sense of satisfaction in having completed the 10 week programme gave me every confidence that I could lift more weight.

Ed Coan’s 10 Week Deadlift Routine is designed to be a no holds barred, balls out, gut busting test of strength and character.

The lower back and hamstring DOMS in the first few weeks of the programme were insane, and this certainly impacted on the rest of my training.

My squat in particular suffered, to the point were I just went light for a couple of weeks to avoid any risk of injuring myself.

That said, having completed the 10 week programme, all my main compound lifts have improved, particularly the squat.

Also, the new found grip strength has massively helped my all round lifting and grabbing game.

Think Popeye but without the grotesquely bulbous forearms.

Now, I’m clearly not qualified enough – or that much of a self-righteous cunt – to offer any alterations to this deadlift programme, but here are two things that improved my user experience.

Your average powerlifter ain’t going to be doing too much cardio but for me a great way to ease the lower back and hamstring DOMS was to do at least 30 minutes of walking the day after a deadlift session.

It will also ease the strain on the joints which will almost certainly be aching.

Fairly obvious, I know, but I’m going to hazard a guess there are no more intense deadlift programmes in the powerlifting ether than this one.

So make sure you’re upping your calorie intake in the days before/after each workout.

This is certainly not one for the faint hearted.

If you don’t think you’re cut out for this programme, you’re right.

It’s a mental test as well as a physical one that’s for sure.

Expect a sore lower back while driving, hamstrings burning to pick up everyday items, and wrists shaking as you cut through your evening steak.

But, above all, expect to do some serious damage to your current deadlift PR.

This is without doubt the best deadlift programme around designed by one of the greatest deadlifters of all time.

If you commit and follow this programme to the letter you will not be sorry. 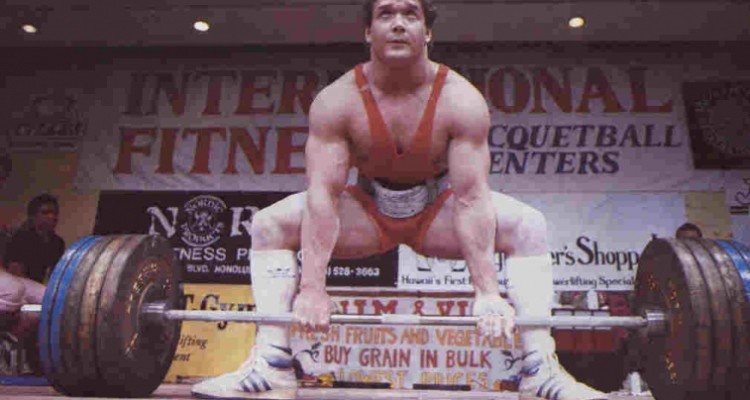 If so, what’s the verdict?

Are you thinking of giving this routine a go?